Carrie Foley with a work in progress.

You can walk into the most unassuming shops on the side streets of Nashville and stumble onto stories no novelist could concoct. Between them, proprietors Janet Cullen and Carrie Foley bring degrees in gemology, chemistry, and social work, as well as a collection of power tools and thousands of miles of travel to the pieces displayed in their cases at The Brass Ring. What ties it all together is utter awe for the stones and the process of bringing out their inner beauty.

Their wares are indeed stunning. From fire agates dotted with brilliant little starlike spots to picture jaspers that seem to depict landscape scenes much like those in plein-air oil paintings, one finds beauty that, for all the cutting and setting involved, has nature as its true creator.

Foley is a native Hoosier and Cullen moved here from New York with her husband’s job transfer. They met as members of Bloomington’s now-defunct Gem and Mineral Club, a group bonded by an obsession with the splendor of stones. They would go on weekend rock hunts to locations in Indiana and beyond, and then swap ideas on lapidary technique. “Our spouses never saw us,” says Cullen. “We were just so crazy about cutting stones. I’d forget to go to bed at night.” Along the way, Cullen, Foley, and the others amassed a collection of saws and polishing equipment, filling their garages.

Foley had done work toward a degree in chemistry and that, combined with her hands-on knowledge, led to jobs with the Indiana Department of Natural Resources’ Geological Survey, the U.S. Geological Survey, and then the Alaska Pipeline Consortium, a joint project of several major oil companies. In that capacity, she lived in Alaska for a time, inspecting the ground on which the consortium built pipeline supports.

In 1974, Cullen and Foley opened The Brass Ring, a store they operated for twenty years. “We walked in there with maybe twenty pieces of jewelry and immediately started selling,” says Foley. The Brown County Craft Gallery also showed their work during this time.

Cullen earned three scholarships from the Gemological Institute of America. “It enabled me to study the interior compositions of the stones. I thought we were just cutting really nice agates, but it went much deeper than that.”

When they closed The Brass Ring in 1994, Foley earned a degree in social work from Indiana University, which enabled her to open a practice as a psychotherapist and addictions counselor, which she still maintains. While pursuing that major, she took silversmith classes in the fine arts department. She sees a common thread between these concurrent careers: “As a therapist, I sell change. I work with people who don’t want the lives they’ve had. As a crafter of jewelry, I take a raw stone and refine it until its potential for beauty is brought to the fore.”

The Brass Ring (also known as Woman’s Way) has been open at its new location since spring of this year. The original intent was to slow down a bit, but that hasn’t happened. “We’re here every day, and at night we’re thinking about it,” says Cullen.

“We used to participate in thirteen or fourteen juried shows a year, but we’ve pulled back from that level,” says Foley, to which Cullen kiddingly responds, “She’s lying. We haven’t pulled back.” 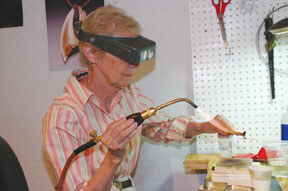 Some of their good friends have their work on display at The Brass Ring as well. Metalworker George Goehl offers his sculptures of bicycles, cattails, and maple branches. Judy Rehmel shows her quilted wall hangings. Potter Jan Arbogast and photographer Trudy Marsischki also display their works.

In addition to jewelry, Cullen and Foley carry their own fold-formed small copper sculptures and gold-filled “magic earrings,” so called because they sit inside a person’s ears, without benefit of piercing or clamping.

Foley says there’s a simple reason why the two can’t seem to slow down: “We are some of the luckiest people around. We’ve lived our entire lives doing what we love to do.”