Bill Floyd and his brother Virgil Keith with the 1914 Model T project.

The Floyd brothers, Virgil Keith and Bill, grew up in a quiet corner of Brown County. But quiet does not mean inactive. Both brothers have led busy lives, raising families while working in Columbus.

Virgil is known for the Model T and Model A Fords that he rebuilds and drives in parades and around the county. “I’ve liked Model Ts all my life,” he says of the obsession—hobby would be too mild a word—that has possessed him since he was a boy.

“I’ve still got my first car I’ve had since I was thirteen and a half. It’s a ’51 Plymouth, two-door hardtop. That’s dad’s first tractor,” he points out another vehicle. “He sold it when I was about ten and I got it back when I was about 42, after I got out of the Army.”

“I don’t know how many cars he junked out when he was just a teenager,” says Bill of his younger brother. “He gets something in his mind and doesn’t quit until he’s done.”

Retired now, Virgil’s current project is a 1914 Model T Ford. “Three months ago that was a bare frame sitting there,” he says. “It lay upstairs for the last 15 years because I didn’t have the proper motor. Then I got a bunch of parts and a 1914 motor. I got the frame out and got the motor in it. It’s got a counterweighted crank in it—one they run in racers back in the ’20s. It’s got new pistons, new valves. I made the body. It was completely rotted away,” he continues. “I made the brass step plates. It’s got carbide headlights and kerosene side lights and taillight. I bought those tires used off a friend of mine. That’s a brand new white spare tire. It’s never been on the ground.

“I’ve always liked Model Ts and once I started collecting people found out I liked them. I’d be driving around and they’d come and they’d tell me where parts were at and I just kept collecting.”

Vehicles sit around his property, protected by the shelters he’s put up over the years to house them. One of his favorite cars is a 1929 Model A that he calls his Beverly Hillbillies truck. It’s all gussied up to look like the one the Clampett clan used to reach southern California, including bench, moonshine jug, roadkill bucket, Granny’s old rocking chair, and a stuffed toy possum on the hood. “Last week I drove it into town,” he says. “One tourist asked me about my ‘rat.’ I said, ‘That’s not a rat, that’s a possum!’”

Virgil was 23 when he got his first Model T, a car he still owns. It sits with the many ribbons it’s won at parades and shows. “I’ve got a Model T for every year from ’12 to ’27,” he says while walking through the big building he calls his museum. There are many variations of the Model T here, including various two-door sedans, one-ton trucks, and touring cars. There’s a huckster wagon, like the one Kess McDonald used to prowl the hills of Brown County. “There’s only one in that row that I haven’t drove and I mean drove around a bunch!

“I’ve got three fire trucks,” he continues. “This is a 1915 and the other a 1918. Both of these were over at Nashville.” Some of his cars are as much memorials as they are vehicles. “This old peddler’s truck has Dad’s fishing pole, Grandpa’s chicken coop, one of the Bohall baskets, and Grandma Floyd made that quilt. There’s all kinds of stuff on here that belonged to people who are gone now.” 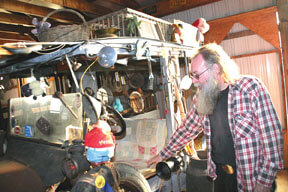 Virgil points out his Grandma Floyd’s quilt on a peddler vehicle.

There’s even a 1913 Model T that’s been sitting in his living room for 29 years. “My wife helped me put the rear end and frame in there and my Dad and Uncle Felix helped me carry the motor and transmission,” he laughs.

Model T clubs from Chicago, Ohio, Kentucky, Illinois, and Michigan come over to Brown County to see his collection, meeting under the GaTebo, a gazebo he’s built from old junk Model T parts. “Six rear-end housings, 3 front axles, five wishbones, and two radius rods,” he begins listing its many parts, “crankshaft, flywheel, and a complete frame underneath it all welded together. It’s got a radiator, a Model T crankshaft and camshaft, Model T wheels and three different kinds of timing gears. This is an accessory water pump, emergency brake, crank, intake manifold, band assembly, magneto windings, spindles, headlights, steering wheel, transmission covers. There’s a motor down here, pistons, rods, and wheel bearings—it’s so people can see what the inside of a car looks like.”

“Everybody always wanted to know what I wanted with all this junk,” he says looking around at 40 years of collecting, reconstructing, and preserving. “I like it. I’ve always loved cars,” he concludes just as his cellphone breaks into I Walk the Line.

Next month we talk with Bill Floyd about growing up in Brown County and the difference between a skunk and a kitty kat.