“I feel like my art is part of my ministry,” says woodcarver Jerome Sanderson.

Jerome is an intriguing combination of traits. He’s quiet and contemplative, as befits an ordained Orthodox minister, but he talks animatedly about his woodcarving work. He loves music and plays a robust brand of bluegrass. He and his family relish the rugged self-sufficiency of their hilltop life in northern Brown County, yet he frequently travels throughout the United States.

His wood pieces are mostly of a religious nature now, although he still does some face lamps, bear lamps, and fireplace mantles. He creates icons and ornamental Orthodox Church furnishings. Presently, he’s working on a crèche for a family.

Sanderson feels the modern world strongly needs art that is spiritually inspired. There is too much disharmony and ugly visual pollution out there in big cities. Beautiful handcrafted art connects a person to the grace and prayerfulness that goes into producing the work.

Basswood is one of Sanderson’s favorite materials for carving. He also likes oak, cherry, and poplar. He orders much of his wood from an Indianapolis supplier and grows some on his 28-acre Brown County property.

Sanderson often delivers his finished pieces to his clients, driving to distant states. In addition, he studies with an art teacher in Chicago for two days every two weeks.

He was born in Ohio and raised in Washington, D.C. “I played in rock bands in the 1960s, but as I came into the religious life that wasn’t quite appropriate,” he explains. “I played fiddle and mandolin in ensembles for folk dances and other events where young men and women could meet in a chaste, clean way.” 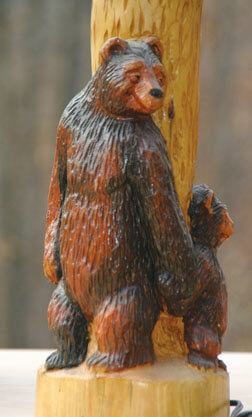 He began carving in 1973 while he was working at a health food store in Milwaukee. “We had these giant carrots and I just started carving faces on them. My next step was carving a duck out of balsa wood.” While living on a ranch in Santa Rosa, California in the late 1970s, he made his first crèche.

For a time, he owned a sign company in Indianapolis, which he sold to his partner. He still collaborates on some sign projects for the business.

Sanderson frequently paints icons of African saints. “Sometimes black people are told that Christianity isn’t a natural faith for them, that it is a white man’s religion,” he says. “I want to let them know that a great deal of its development took place in Africa, such as St. Anthony the Great and monasticism.”

Sanderson, his wife, and children are all quite musical. His oldest son is studying violin at the Indiana University School of Music, and the other three are enrolled in I.U.’s pre-college program. While they are highly trained in classical performance they play bluegrass and fiddle folk tunes from various European cultures with great zeal. The family often performs at area nursing homes.

The Brown County Orthodox congregation, Christ the Savior Orthodox Church, meets on Saturdays at its Nashville bookstore, St. John the Barefoot. It currently has 20 members.

The Sanderson homestead is reachable by either of two steep dirt driveways. Only a sturdy vehicle such as Sanderson’s Jeep is capable of making it all the way. Upon arriving home, Sanderson steps inside the barn and fires up his main generator and the lights come on. The family also has wind generators and solar panels. Various kinds of animals meander about everywhere one looks: a rooster on the porch, a collie in the living room, rabbits in a back room, horses in the stable. The sound of one rehearsing young musician or another generally fills the air.

“I take breaks from my woodcarving a few times a day and just walk around the land and pray,” says Sanderson. “I’ll see light filter through tree branches in a particular way and think—the art that humans create only hints at the magnificence of this.”

Sanderson’s work can be viewed at

<www.sandersonwoodcarver.com>. He can be contacted at (317) 797-9508. Some of his work can be found in Nashville’s Antique Alley shops Through the Looking Glass and the Sassafras Digger, and at Big River.