Almost 60 years ago, Merle Travis wrote a song with these lines: “Like a fiend with his habit, like a drunkard his wine, a man will have lust for the lure of the mine.” I, personally, do not harbor any lust for a coal mine but I am well acquainted with that feeling when it’s applied to the Bean Blossom Bluegrass Festival. For me, the Bean Blossom Festival is better than Christmas because Christmas only lasts for a day and it’s generally cold. Bean Blossom, on the other hand, goes on for eight days, the weather is almost always perfect, and the music is the best you’re gonna get this side of Hillbilly Heaven.

Last year I spent several days out at Bean Blossom and got to hear Dr. Ralph Stanley, one of the grand old men of Bluegrass music, reprise his rendition of “O Death” (it sends the shivers up your spine). And Karl Shifflett and the Big Country Show was there, workin’ up hot numbers around a single vintage microphone.

One of the things to watch for at a Bluegrass festival is the way a band choreographs each song. After a verse one member of the band will step up to the microphone to take a lead while the other players step back and shuffle around for the next solo. And then members of the group will lean in together at the microphone for harmonies that just don’t exist anywhere but in a Bluegrass tune. 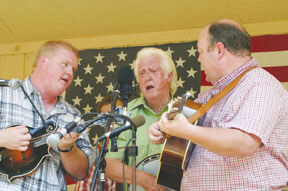 Some of the best harmonies by J.D. Crowe and the New South.

Many other Bluegrass pioneers were present such as Bobby Osborne, of “Rocky Top” fame, Jesse McReynolds of Jim and Jesse, and J.D. Crowe. And though tradition and a loving regard for the history of the music are the foundation of the festival, newer and younger groups get their due.

One of the best of the new crop is the Cherryholmes Family. They are amazingly talented and an honest-to-gosh family. They played a set of mainly original tunes that displayed the individual talents of each member. Daughter Cia Cherryholmes is already recognized in Bluegrass circles as a whiz on banjo—not to mention she’s cuter than a speckled pup.

James King is another of my favorite Bluegrass stars. He not only played some great sets with his band but left a truly lasting and sweet memory. He showed up on Wednesday afternoon with a couple of bushels of Georgia tomatoes, Vidalia onions, pounds of baloney, and I-don’t-know how many loaves of bread. Then he got up on stage and invited everybody to have lunch with him. James, himself, sliced the tomatoes and sweet onions, and the crowd, including me, enjoyed best baloney sandwiches while conversing with the band.

And that reminds me, even when the music on stage stops, the parking lot and camp site pickers never do. If you play a banjo, guitar, mandolin, fiddle, or bass, or just want to hear some great pickin’, you’ll be more than welcome at any circle—and there’s plenty of ’em.

When you spend time out at the festival you are bound to get hungry. If a performer isn’t serving a free lunch, you’re still in luck because there are lots of vendors cookin’ up the most delicious grub you ever tasted—hamburgers, tenderloins, barbecue, fresh curly tater fries, sausages, bloomin’ onions, just about anything that makes your mouth water. My personal favorite is the fried green tomatoes with a chipotle mayonaise sauce on the side. And there is even homemade ice cream for dessert. After you have filled your belly with great food and your soul with great music, and you’re all tuckered out, you can rest easy back at a great campsite.

Forty years ago the camping at the Bill Monroe Bluegrass Park was perty primitive. It was almost all tent camping—privies and no hot showers. There might have been a few electrical hook-ups for RV’s—but I don’t recall any. Now everything is up-to-date. Whether you’re camping in a motor home or the old trusty Coleman tent, you’ve got clean water, electric, and hot showers.

But the best thing you get free of charge at the festival grounds is an instant community.

I have never failed to make new friends when I go to the festival. It might be the family I’m sittin’ next to, or the person I meet at one of the vendor tents, or somebody I’m in line with waitin’ my turn for fried green tomatoes. Why even the performers enjoy mingling with the crowd and getting to know their fans. Folks at the park are friendly and considerate and everybody has Bluegrass in common.

So, you’ve got fine weather, friendly folks, great music, good accommodations, and tasty food. What could make for a better vacation or just a memorable day or two in Brown County? Everybody that I’ve mentioned from last year is coming back with about 50 more top Bluegrass Bands all together. So come on over. The Festival starts June 9 and runs through June 16. Tickets are available at the gate or by phone at (800) 414-4677 or (812) 988-6422. And more information plus a full line-up of performers is online. Just crank up your computer and go to <www.beanblossom.com>.