It seems there are two main types of residents whose focus in life is keeping Brown County culturally vital: long-timers, often with roots going back generations, and those who fell in love with the place as visitors and then settled here. Mark Trapp falls into this second category. His Nashville Gallery, open less than a year, is quickly becoming a hub of commerce and communication for established artists in the area.

As a thirty-year resident of the Indianapolis area, where he was a stockbroker for Charles Schwab, he and his wife visited Brown County frequently. They had long sought out visually captivating areas of the country in general. “We’ve traveled to at least half the national parks in the United States,” Trapp says. “We knew we wanted to stay in Indiana, and you can’t get more scenic than this.”

They went on the artists’ studio tours and the idea for providing artists a centralized exhibit space took root. Trapp made a presentation to Art Alliance Brown County about such a venture in July 2006 and was favorably received. He initially rented the front part of the two-story house at the corner of Van Buren and Franklin streets, at the northeast corner of Calvin Place. Recently, he has been able to rent the rest of the house as well.

“We certainly welcome anyone who does any type of art or craft,” says Trapp. “It does seem that I get approached by photographers most often, so lately I haven’t been able to accommodate all of them. We’re striving for balance among the various art forms.” 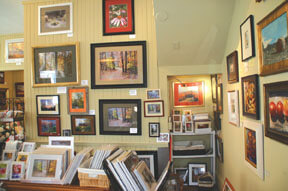 Exhibitors can rent entire walls and sections of rooms, or extremely small areas. “One person just rents a little table from me,” he says. Landscape painters whose works also appear at the Brown County Art Gallery and elsewhere in town are represented, as well as potters such as Judy Prichard and Greg Schatz, wooden bowl makers Mike Shadley and Chad Shock, rug weaver Chris Gustin, fiber artist Barb Brooke Davis, and hat maker Georgiann Ayer. The Sampler, a Homer, Indiana-based business specializing in solid cherry furniture, has a comprehensive display of its offerings. In addition to original works, many of the exhibitors are also selling prints, cards, and other lower-priced items. Brochures are available for most of the artists.

While these artists generally have studios and exhibit their work in other venues, it’s not likely that they could find a more high-profile location for gaining exposure. Nashville Gallery is situated at one of the most well-traversed intersections in all of Brown County. Trapp estimates that over eighty percent of those stopping in are from out of town. “Certainly a lot of tourists are from the Midwest,” he says, “but we recently had some visitors from Norway who read about Brown County in a travel book. They specifically wanted to experience small-town America. We’ve also had them from Germany and Japan.”

Trapp is a soft-spoken man, but once he has a passion for something, his promotional juices begin flowing. Since moving to the area, he has joined the board of the Brown County Chamber of Commerce and become involved in some upcoming projects designed to attract visitors. “We’re starting something called Downtown Saturday Night this spring,” he says. Some weeks it will be held by the gazebo on Jefferson Street, and some weeks at Coachlight Square.” The series will feature local musical acts, car shows, and activities.

“Promotion is not new to me,” he explains. “For about five or six years, I promoted sports-memorabilia shows at the Indiana State Fairgrounds. Famous athletes would come in to sign autographs.”

What the artists like best about the gallery is Trapp’s emphasis on local work. He feels strongly that the key to Brown County’s future is retaining its special flavor. “Some of what you can find around town nowadays you can find anywhere,” he observes. “I want to provide space to the people who are still making Nashville what it started out to be.”