The Sampler at Holy Cow! 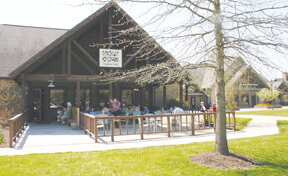 All cows must eventually die, but only the truly good cows are headed for the righteous grill and the consecrated burners down at Holy Cow, a new steakhouse and grill down at 101 East Washington Street in Nashville.

The attractive dining room is graced by friendly and efficient servers and offers a full menu featuring just about anything you might want to eat.

I settled in with my dearly intended. She ordered a salad and I the soup while we perused the generous offerings, which portended of a feast to follow.

The soups are good and available by the cup, bowl or kettle.

It’s hard to beat the cheesy creamy onion soup (“The name says it all!”), or the Prairie chili named, not for the vast expense of grassy plains of the American Midwest, but for owner Jerry Prairie, and made from scratch with an old family recipe, topped with red onions and cheddar cheese.

You can get a bowl of the cheesy onion or Prairie chili with your choice of a house or Caesar salad, or choice of salad and a loaded baked potato.

The Bleu cheese dressing was heaven-sent, with big hunks of the pungent curd.

All soups and salads are served with warm, fresh-baked rolls with some kind of honey butter that was sinfully delicious.

I brought my beloved to a steak house because she is in the throes of one of those anti-carbohydrate, all-meat diets. It wasn’t exactly a saintly look of pious self sacrifice she gave me as she watched me wolf down half a basket of bread before my meal.

A good selection of appetizers includes flame grilled steak-ka-bobs with veggies, a Baja quesadilla, “Brown County Wings,” and, in keeping with the theme, “onion halos.” Or you can get all three with the “Holy Cow Combo.”

There are sirloins in three sizes (6, 10 and 14 ounces), 12-ounce ribeye or New York strip steaks and even a monster 16-ounce Porterhouse. Someday, I’d like to sample the filet in a six or eight-ounce cut.

I know you are probably thinking that to properly sample a steak house, one should necessarily sample the steak, and I did have a few bites from the sirloin of my kitchen companion.

But on this particular night, I chose to sample the fall-off-the-bone baby back ribs, slow cooked to tenderness and then char-grilled to perfection and brushed with their signature BBQ sauce.

Instead of a combo, I opted for the full rack of ribs. They were so good they were very nearly sacred. Never second-guess a professional diner.

The steaks and ribs come with a bewildering variety of sides including but not limited to baked, mashed, steak fried, or wedged potatoes, seasoned rice, green beans, steamed broccoli, or corn on the cob.

This great variety and flexibility has proved to be a lifesaver for a local single professional mother I know. Her elementary aged son can pick and choose from the “Lil’ Dudes Meals menu, which includes a hot dog or macaroni and cheese

“Just like eating at grandma’s house,” the junior sampler opined.

You can’t start them out too early appreciating good food or feeling comfortable in professional dining situations. Someday their lives may depend on it.

And, there’s a ton of other stuff on the menu that I haven’t yet had the chance to try at this newly-opened eatery, including grilled pork chops, grilled salmon, Baja Chicken, and broiled swordfish.

There’s also a fine raft of sanctified sandwiches like the smothered chicken griller, a fire-grilled BBQ chicken breast loaded with melted cheddar cheese, sautéed mushrooms, and onions; a giant tenderloin (“A Brown County Tradition”); and the “Cheese and Cheese Cheeseburger” a half-pound of choice ground beef charbroiled and loaded with cheddar, American, and pepperjack cheeses.

And, for the truly consecrated, there is the namesake Holy Cow Burger, covered with melted cheddar, smothered with Prairie chili, and topped off with an onion halo. Righteous!

For those who clean their plates, there is the heavenly reward of a sublime dessert: skillet apple cobbler with vanilla ice cream and caramel sauce, a six-layer moist chocolate “Family Chocolate Cake” (“A colossal tower of chocolate”), New-York style “Farmer’s Cheesecake,” and “Ultimate Sundae” with cookies and cream ice cream, chocolate, strawberry and caramel sauces, chopped nuts, and whipped cream.