When Nashville gets its first modern-day movie theater, wouldn’t you expect it to be a unique place in every aspect? That is indeed the case. A viewing experience at the newly opened Lotus Petal Cinema is quite unlike going to the flicks in any other municipality.

For one thing, the atmosphere is cozy. There are thirty-five seats at Lotus Petal. For another, one doesn’t have to trek through acres of parking lot to get to it; it’s in a little cabin-like structure in the center of Antique Alley. Then there’s the combination of retro embellishments, rustic touches, and high-technology delivery of content, which is an eclectic mix of classic and foreign films and art-house fare.

It should come as no surprise that Lotus Petal Cinema is the brainchild of Christopher Dick, whose roles thus far in life have included elephant trainer, book publisher, photographer, independent filmmaker (given to producing “misty-eyed coming-of-age films”), musician, record label owner, founder of an Internet company, gallery proprietor, and devout student of Buddhism.

Among the many things that have occupied his kaleidoscopic mind during his lifetime, he’s “always wanted to have a cinema,” he says. “At any point in my life, whether I’ve been happy or sad, I’ve always liked to watch a good movie. It can change your life.”

He wants to recreate something of the complete social experience afforded by the movie palaces of yore. “I’ve found some companies that specialize in reissuing pre-1950 brands of candy, which is what we’ll serve at our concession stand,” he says.

The presentation will be state-of-the-art, however. Viewers will enjoy digital high-definition projection and Dolby Surround Sound.

In addition to specialty films, Lotus Petal plans to feature live comedy and music and make the space available for organizations to hold events. Screen advertising, both still and video is also available. Pricing information can be obtained from Chris.

More such commercial opportunities, as well as various forms of civic involvement, figure into Chris’s plans. Individuals and organizations can purchase sponsorship of seats in the theater, for which their names appear on plaques on the backs. He is working on a partnership with the Brown County Community Foundation, in which proceeds from ticket sales on specific days of the week would go to particular endowment funds. “I’m trying to get investment firms to match funds,” he adds.

At the Lotus Petal Cinema website, there is a page on which one can submit a request for the theater to bring in a particular film. Visitors can also review recently shown movies. 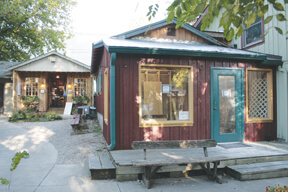 The Cinema is located a few feet down a footpath from Lotus Petal Gallery, which is officially an art-and-craft shop in the typical Nashville mold, but really serves as a nerve center for Chris’s many enterprises and projects. It is here that one can inquire about getting a book published, or getting some printing done. He still plans to revive his recording studio and record label. Of course, one can buy one of Chris Dick’s fanciful photographic compositions.

Chris grew up just south of Indianapolis. After graduating from Center Grove High School (during which period he trained elephants at the Indianapolis Zoo) and obtaining a broadcasting degree from Vincennes University, Dick started an Internet company that went national and was bought by a larger corporation. Dick left that venture and became involved with the Tibetan Cultural Center and Chamtse Monastery in Bloomington. That led to an extended period of Buddhist study in south India.

Still, he’s always loved Brown County. He’s visited relatives here since his youth, and felt as if he’d eventually wind up living here. Now that he’s the go-to man for a night out at the movies in the area, it seems he’s here for the long haul.