It all started with art.

“I was in the southwest desert taking photographs and thinking the pictures didn’t look like what I was seeing,” says Ronni Lynn Hayes. “I began painting because I was not satisfied. I wanted to take that desert home. Painting changed the way I see things—trees, that chair, the shadow it makes on the wall. I’m very interested in the place where creativity and spirituality intersect.”

Hayes, who grew up in Brown County, recently moved back to Nashville, opening Sacred Seed, where she gives spiritual counsel, performs weddings, and practices psychic and psychometric reading.

“I guess I was attracted to Tarot cards by the artwork,” she says. “I liked the idea that I might be able to interpret the meaning of the cards intuitively and, after quite a bit of study, to help people.”

Ronni was called to ministry the same year she began reading Tarot. While some may look askance at her joining the two, Lynn sees it as the natural result of a lifelong spiritual quest. “There are folks that might not be able to wrap their mind around somebody being an ordained minister and doing this type of activity because it has always been associated with the dark, but it really all fits together very nicely,” she says.

While some believe Tarot to be handed down from Ancient Egypt, the first historical evidence of Tarot cards appears in northern Italy during the 15th century, where they were used as playing cards. It was in France, around the time of the French Revolution, that Tarot was first used for divination. More recently psychologists like Carl Jung have used Tarot symbolism to explain fundamental archetypes lurking within the human subconscious.

“People have a question in their mind when they’re shuffling the cards but they don’t tell me what the question is,” Ronni says of the process of reading cards. Ten cards are placed in a pattern called the Celtic Cross, with one acting as a signifier, to ask a question. The answer lies within the heart of the questioner. Ronni uses the cards to help guide them there.

Hayes studied psychic reading in Indianapolis with a friend. “She helped me learn about trusting my intuition,” she says. “I did a lot of reading about Tarot—its history, the meanings of the cards, how to interpret certain combinations—and lots of practice. It seemed impossible to me that I would be able develop that skill so that I would be truly helpful to people.”

Ronni is studying for a Master of Divinity at Earlham College. “I started ministering in 2002. I do weddings and commitment ceremonies, house blessings, things like that. I also do spiritual direction and counseling without cards.”

Hayes has been on a spiritual quest since she was a child. “I grew up in a home where we went to church every Sunday. My belief system was completely different that that of my parents. Some of that was youthful literalism but I’ve always believed that all roads lead home. It doesn’t matter if you are Christian or Muslim or Buddhist.”

At the age of twelve she decided she wasn’t ready to be confirmed in her church. “I called the pastor about a week before graduation and said, ‘I can’t do this.’ He kept patiently trying to get me to lighten up but finally got exasperated and said, ‘Your parents are going to kill you—and then me—if you don’t stand up there!’

This was only the beginning of a search that saw her study everything from Judaism to Wicca, never quite finding something she could believe in. “I have my own belief system that I embrace,” she says confidently. “You can have a higher power of your own. When I was called to ministry I was told that I could be an interfaith minister. I want to be a member of a community of faith that doesn’t exclude anybody. Earlham is a Quaker institution and the Quakers are tolerant and very accepting,” she says.

Her ministry is for the people who fall between the cracks. She performs weddings for those who “can’t get their ministers to perform the service but still want to be married under God. They want to have a spiritual component. There are a lot of people like that—people who have lived a fairly secular life. They didn’t have childhood training in religion but they believe in the sanctity of marriage and want it to be a sacred ceremony. I can do those ceremonies and those rituals and nobody gets hurt.”

The most important thing to Ronni is that she helps the people who come in to see her, such as the woman who came in recently for a psychic reading. “The cards revealed a way for her to take care of herself and get out of that self-destructive cycle where she felt guilty and responsible,” she remembers.

“She came in pensive and she left smiling.” 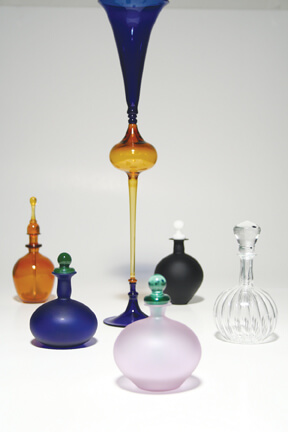 Sacred Seed includes a gallery of paintings, prints, and blown glass in Calvin Place at Van Buren and Franklin Streets in Nashville, above the Daily Grind. Call (812)-345-2377 for appointments, or email <sacredseed@att.net>.