Brown County’s other main charm besides its scenery is its lore. Every place and person one encounters is the launching point for a chain of connections and contributions, the sum total of which is the culture unique to these hills.

Brown County Community Foundation CEO Lisa Terry, who has considerable experience in celebrating the heritage of notable places, has organized a theatrical celebration of the legendary figures who have made the culture in these hills so unique. It’s called Tell-a-Bration, and it will take place on Friday, September 14 and Saturday, September 15, at 7:30 p.m. both evenings at the Seasons Conference Center. A cash bar will be provided. 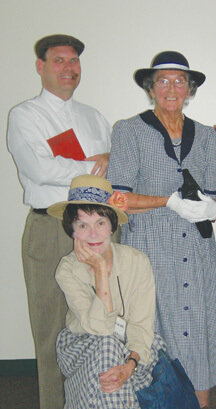 The performance will begin with Terry in the role of emcee, briefly explaining what the audience is about to see. Behind her will be Frank Hohenberger’s photographs of many of the people to be portrayed throughout the evening. Each historical figure will be portrayed by a current Brown County resident in appropriate costume, delivering a narrative laced with allusions to the figure’s personality traits and contributions.

After the introduction, the stage will go dark and Robbie Bowden and Friends will launch into the first song, “500 Miles,” which sets the scene for Paul Schultheis’s portrayal of T.C. Steele, in which he describes disembarking at a rural train depot and finding his way to Nashville.

“There’s a lot of humor,” says Terry. “There are some sad stories, too, and we’ve tried to achieve a balance and flow between the two.”

The event is a Foundation fundraiser. All proceeds will benefit those endowed funds currently held by the Foundation.

Terry has a background in theater. “I did something like this in Logansport around the time of the millennium,” she says. “So when I took this position, I took note of the approaching one-hundredth anniversary of Brown County’s stature as an artist’s colony, and saw a great fit for such a project.” 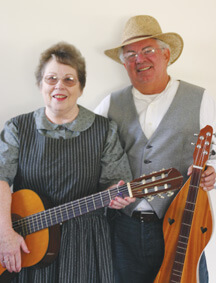 The first step was to sit down with Pete Sebert of the Brown County Historical Society and determine who should be featured in such a show. Sebert was then able to provide ample biographical detail about those selected. The actors in the show have been studying the biographies.

Terry will play painter Marie Goth and Mike Bube will play V.J. Cariani, and the two portrayals will provide the audience some insight into the special relationship between the two artists. They had cabins next door to each other and looked after each other through many challenges with great devotion.

Through the Marie Goth connection, Terry discovered she had more of a Brown County connection than she knew. Shortly after moving here, she saw a Goth painting at the Brown County Art Guild and took note of the name in the title, “Portrait of Ione.” “I knew that an old school friend of mine from my Logansport days had had a mother named Ione, which struck me because it was so unusual. He had since moved to Baltimore. I called him and he said, ‘That’s my mother. She and Marie Goth were good friends.” To top it off, the Baltimore man had a brother, Bill Swigert, who, with his wife Jan, had moved to Brown County.

Some of the other actors include Jim Oliver, who will portray Will Vawter, illustrator of James Whitcomb Riley’s books, and Sherry Bube, who will portray Sarah Harden, the model for Vawter’s rendering of Little Orphan Annie. Sally and Rich Greeno will bring to life the rambling troubadour couple Doc and Diner Beisel with their own music.

An outreach effort is a large part of this project. The actors are available for community events. “All the organizer of an event has to do is call me,” says Terry. On the evenings of the performances, fourth graders from the county’s elementary schools will be bused in. Terry says that “our whole plan is to educate and celebrate.”

Tickets and additional information can be obtained from the Brown County Community Foundation at 96 S. Jefferson Street in Nashville of by phoning