Skip to content
Made in Brown County For Bare Feet

Made in Brown County
For Bare Feet

The Helmsburg-based sock-manufacturing company For Bare Feet is a testament to focus on one’s vision, family bonds, team spirit, the value of asking questions, and putting down roots. The founder, Sharon Rivenbark, has lived a story that has so many compelling aspects, no media coverage of it seems redundant.

If one starts at the present when looking at her life and work, the scene is best set by the hum of automation on the production line, the stately corporate office building, the outlet stores, sports-league licensing agreements, the national distribution, and the enviable sales figures.

It may be best perhaps, to make the year 1983 the point of entry. Rivenbark was teaching fifth grade at Spurnica Elementary School and raising five children, including son Tim, who had just started his freshman year at Indiana University in Bloomington. On October 31 of that year, his friends in his dorm called her to say that Tim had not gotten out of bed, and that they were concerned. A hospital trip ensued, and he was diagnosed with a brain tumor that would crowd out his healthy tissue and steadily lower his IQ.

An occupational therapist told Rivenbark that some kind of activity that employed Tim’s motor skills would be the most effective way to allow him to be productive in the time he had remaining. “I first thought of food, but neither Tim nor I liked to cook,” says Rivenbark. And then she got the idea of making socks.

She rented space in Nashville’s Antique Alley and acquired an old Banner knitting machine. “I had no idea how to make it run,” she says, explaining that more asking around led to the arrival of someone from a North Carolina textile-mill family who showed her how to use it.

Sharon says the way she learned business was “definitely seat of the pants,” noting that she didn’t write a business plan until 1995. “When I started I didn’t even know what a line of credit was,” she says.

Her first sales foray beyond Brown County happened through a visit to her shop by a Noblesville man. “He wanted to sell my socks in his store there, and I refused at first, thinking it would hurt my business in Nashville. I finally relented and said, ‘Okay, I’ll sell you three dozen pairs of Christmas socks.’ Before long he was back with another order.” Then she met people from the Simon shopping-mall chain who interested her in setting up kiosks.

Attending trade shows led her to associations with sales representatives. The business took a major step forward when she made a connection with the trade association for college bookstores.

Tim worked behind the counter and went with his mother on business trips, but his illness was making its grim progress. He died in 1987.

By then, she had six knitting machines. She took them to Helmsburg, where she bought the property on which Kenneth Fleener had run a motel out of train cars and a small dining-and-entertainment establishment. She enlisted a son-in-law, Karl Mills, who showed her how to run those machines and soon afterward use computerized equipment. He’s still there, now holding the title Vice President of Manufacturing. “He can make machines do things they shouldn’t, by rights, do,” says Sharon. “We’ll present him with a production puzzle and he’ll twirl his moustache and say, ‘I’ll have to think about that.’”

In 1995, the company erected its production building. In 1998, it added its shipping and inventory building.

Last year, Rivenbark began hosting tours, with an emphasis on school children. “The tours serve three purposes,” she explains. “People can see the attention we give to quality, children can see how a production line works, and we’re demonstrating that Americans are still making socks.” This last point is important to Sharon. She notes the encroachment of Chinese enterprises into the American market, and their willingness to copy patented designs. 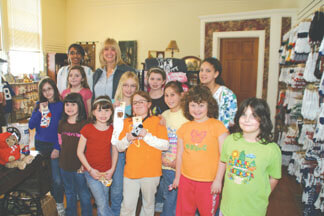 Sharon Rivenbark visits with a Girl Scout, Brownie, and Daisy group from North Vernon at the factory tour gift shop.

In addition to two Nashville stores and outlets elsewhere, For Bare Feet enjoys licensing agreements with the NBA, including headbands and wristbands, NASCAR, and many college sports leagues. Flip flops, with logos embroidered on the straps, are a new product line for the company.

Two daughters and four sons-in-law are among the corporate officers at For Bare Feet. In fact, in late March, one daughter, Mandy Zellner, became President. Sharon remains board chairman.

A close-knit family is something Sharon values highly. “As many of us as possible get together on Sundays,” she notes.

She says that such loyalty is a Brown County value. “I wouldn’t live anywhere else in the world,” she says.

The Nashville retail locations are on Main Street next to the Visitors Center and in Antique Alley at Jefferson and Franklin Streets.