Skip to content
Meet Me at the Muddy Boots Cafe

Meet Me at the
Muddy Boots Cafe

Sometimes things just happen. Like when friends Roberta Meyers and Tyra Nickel were thinking about starting a business and looking at a building to rent on North Van Buren Street.

“We both fell in love with the space right away,” says Roberta. “Perfect for a little coffee shop.”

“We were trying to figure out what we were going to do,” Tyra adds, “and Nick Shultz came up and said he’s just starting out roasting coffee locally. When things happen like that you know you’re heading in the right direction.”

“We both went on spring break to California,” Roberta continues. “There was great fast, healthy food everywhere we went. That’s what we wanted to bring to Brown County.”

At first the menu was simple. Only Tyra had run a business before and they found themselves with a lot more work than they had anticipated. “It’s definitely been an adventure,” Roberta says. “I had to wash dishes today. Last week I helped Paul cook. You do everything and that’s what I think is fun.” 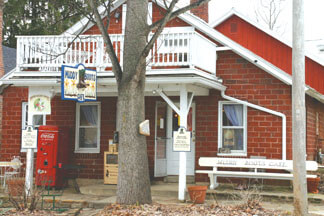 From its simple beginnings Muddy Boots quickly became a favorite local hangout. “Tyra wanted to bring the old style Brown County back into Nashville,” Roberta says. “We wanted to have a place where people could come and gather—the shopowners and locals. We’ve had good response.”

“If you have a community you’ve got to have a community hangout,” Tyra adds. “It’s kind of a ‘build it and they will come’ theory. A place to hang out and play cards, listen to music, have good food, and be with your friends. People were very responsive. It’s great because we’ve had a lot of help from them—we’ve had people get up and bus tables when it’s busy!” she laughs. “It feels like home to the people who come here. One of our great resources is the interesting people that you find in Brown County.”

Which is why their restaurant quickly went from offering simple lunch fair to something far more interesting. “It just kind of took over,” she says. “We have three cooks and they all try to outdo each other.”

Starting with vegetarian fare they quickly added Italian cuisine. “We lucked out with our kitchen, which is why we expanded the menu to be more than just a coffeehouse,” Roberta says. “We have great employees. They all came here because they wanted to work here.”

Muddy Boots also features music on Tuesdays and Saturdays, drawing on Brown County’s pool of excellent musicians. On Tuesdays is the popular Craft Night and the knitting group gathers on Wednesdays. “Craft Night started because I made some paper snowflakes and brought them in to show to a friend,” Tyra says. “Some people were sitting around and said, ‘Hey, do you have some scissors? I want to make a snowflake, too.’ We’ve done everything from screen printing t-shirts to valentine’s cards. It’s a chance to play and create.”

As a final touch they have plans to make their upstairs space into The Golden Chair Spa. “I have three massage therapists lined up,” Roberta says. “Instead of a normal hair salon we want to do hair therapies, scrubs, aromatherapies, manicure, and pedicure. We have another room for massage therapy, where it’ll be private. If you just want to come and spend a half hour you can revitalize your hair.”

All of this comes from the love they feel for their adopted county. “I’ve been here about 15 years,” Roberta says. “It’s like I shouldn’t have been anywhere else. I come from Berwyn, Illinois, which is a suburb of Chicago. It’s row house after row house after row house. It’s funny, because at first I was afraid to go into the woods alone. I’d go a little further each day. I wanted to go morel mushroom hunting. Tyra took me out but we ended up getting lost,” she smiles. “After 14 years I finally found one by myself.

“It feels like Mayberry here—everybody knows everybody. Brown County has such a wealth of interesting people. I would have never met half of them if I didn’t have this café. The people who live way out in the woods come out and socialize here. It made me realize that you don’t have to hide out in your secluded Brown County nest like I was.”

Tyra, who grew up in Columbus, came to Brown County to visit her older sister. “After graduating from school I didn’t know what I was going to do so I came here and got a job at a flower shop. I was heading out west and I guess I didn’t make it very far,” she laughs.

Tyra came up with the café’s name when “I was walking through my foyer and saw several pair of really muddy boots and made the connection between mud and coffee. The name just fit. The café has taken on a life of its own. It feels like a community grass roots thing. We’re trying to do something that includes everybody, that’s unique, and represents the county.”

“It’s nice seeing people enjoying something you worked hard to create,” Roberta agrees. “When somebody doesn’t like something I take it very personal and I’m going to try and improve it. My friends come in and they appreciate it. I guess they can see the hard work Tyra and I put in.”