She was born a city girl, growing up in London and Paris. At 23 she was a producer for the BBC. She had a fulfilling, vibrant, exciting lifestyle. Yet something was missing. “I had friends who owned a sheep farm in the west country of England and I’d managed to snatch a couple of days to stay with them,” Sallyann J. Murphey says of those times. “I remember sitting on top of a very high hill overlooking their farm watching the sun, the clouds, their sheep grazing, suddenly recognizing that it was this kind of setting that made me happy.”

The rest of the story of how she came to live in Brown County, Indiana with her family and many pets is best told in her 1994 book Bean Blossom Dreams, recently republished by Indiana University Press. “The book is about these city folk stumbling around the countryside making hilarious mistakes,” she says. “It ends just as we’re beginning to mature. The new edition catches all those stories up to date. It also reflects on what lessons we have learned.”
One lesson they’ve learned is to keep fewer animals. “We don’t have the 75 animals we used to have,” she laughs. These days they have only “a couple of dogs, cats, the donkey, and a very ancient turtle.” 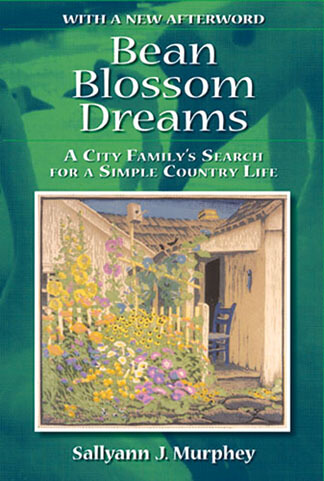 Bean Blossom Dreams is about community, with family at its core. “My childhood was incredibly dysfunctional,” she reveals. “A lot of my drive in adulthood was to reconstruct what I’d never had. It taught me at an early age that relationships are among the most important things in life.”
This was proven to her dramatically when her husband Greg fell ill, wasting away with an illness that defied diagnosis for six years. “Any illusion that we might be playing at country living went out of the window,” she says. “We’re convinced that he wouldn’t be alive today if we’d lived anywhere else. Here we’re surrounded by wonderful people who opened their arms, took care of us, and helped us get through. I don’t see that happening in a big city. Smaller communities are where people are willing to share and reach out.” 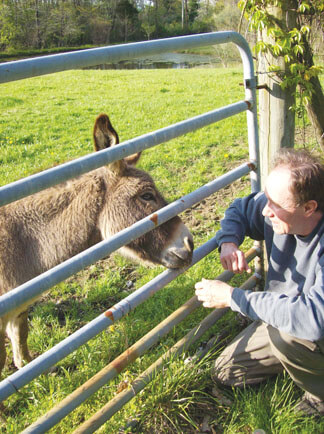 It was finally discovered that Greg was suffering from peritonitis of his intestine. “He’s been fine since then and looks healthier now than since his 30s,” she smiles. “He’s got that spring in his step.”
While Bean Blossom Dreams has touched many people’s lives, Murphey has discovered that what most interests folks most is what’s happening with her daughter, Charley, the brash little girl she vividly evoked in Bean Blossom Dreams. “Charley is now 20,” she says with more than a hint of pride. “She’s a psychology major at Indiana University. She’s found her passion—she wants to specialize in pediatrics for adolescents. She is this amazing synthesis of city girl and country girl. She has sophistication and polish but can then go out to the barn and round up the donkey.”
Murphey is working on a new book she calls The Happiness Project: A Survival Guide for Aging Baby Boomers. “It started because one friend after another was faced with a crisis that hit in their early 50s—they lost a job, their marriage broke up, their parents fell ill, or all three. It’s a time when everybody is facing their mortality, going through spiritual collapse. I started thinking about what it is that makes us happy and I realized that it’s a very individual question. Some of my book is very cerebral, very emotional, but some of it is practical: how to feed yourself on 50 bucks a week; how to deal with the minor and major disasters in your life. It’s about how to seize your destiny back. How you take care of yourself.”
As if they weren’t busy enough the family is developing a new commercial venture that they call “Bean Blossom Farm’s Good Green Earth,” an organic plant food mixed with rich topsoil that they’ve been bagging up and giving to friends for years. “We’re going to produce it next spring,” she says.
When it was first suggested to republish Bean Blossom Dreams, “I said, ‘Isn’t it kind of old?’”
But what she’s discovered is that a new generation is finding solace and inspiration in her story. “They’ve been through a real pressure cooker,” she says of the young professionals. “They’ve begun to think, ‘Surely this is not what it’s all about!’ They’re carving out for themselves places of tranquility.”
Sallyann finds that teaching history at Harmony School in Bloomington is among her most rewarding experiences. “We work a lot on student democracy,” she says. “That’s one of the things I love about it. We’re trying to match that with giving them the skills they need to pursue whatever dream they have. I realized that I enjoy myself more—working with these kids—than I have before in my life.”
You can hear Sallyann Murphey lecture at the Brown County Historical Society at 6:30 on July 7. There is a book signing for Bean Blossom Dreams at the Book Loft in Nashville on July 26 from 2:00 to 4:00 pm. You can visit her website at
<www.sallyannmurphey.com>.