It was a hot August day in 1983 when Peggy Melchior Pearson first opened her marionette theater. “I had only two college students in the audience. I cried all the way home,” she laughs at the memory. “So many people had come in while we were sweating with our saws and our hammers. Everybody said, ‘Oh, this is going to be really neat.’ I thought, ‘Man, if I had a quarter for everybody who came in here!’”

On a cool spring day twenty-five years later Peggy sweeps up the winter’s debris in the little dead-end alley off Van Buren that’s the home of Melchior Marionettes while preparing for another season. “It’s never been a huge money maker,” she says, smiling, “but it sure has been a lot of fun.”

Peggy began her life-long interest in marionettes while growing up in Cleveland, Ohio. “My mother started with very small marionettes—European-style fairytale type of characters in the early ’50s when I was a little girl. Then she decided to go to cabaret style of marionette, which is half life-size. By the time I was sixteen I had my own show.”

Marriage brought Peggy and her marionettes to Indianapolis, but it was Alice Weaver who brought her to Nashville.

“I collect old marionettes,” she says. “I came to the Ferguson House and asked Mrs. Weaver if she had any. It was a very strange place and she sat in her rocking chair, doing crossword puzzles, not intent on selling anything. I told her I was a puppeteer. She was a little bit surly. I thought, ‘I’m going to fight fire with fire.’ I said, ‘We came down here without our children because there isn’t much for children to do,’ and I sort of sarcastically added, ‘What you need is a puppet theater!’

“She called me that evening at 11 o’clock. After telling me that my phone number wasn’t in the proper directory she said I should meet with Andy Rogers. He said, ‘Don’t spend a lot of money. See what you can do with this alley space between the Bartley House and Monday Morning Leather.’

“So my husband and I hauled lumber from Helmsburg and built the benches, floor, and stage without any architectural plans.”

After the rough start they hit upon the simple idea of passing out flyers announcing their performances and enough visitors returned to keep the theater solvent. “Then I decided to build a hand and rod puppet by the name of Peewinkle—a little gnome character—to have rapport with the children. That worked.

“In the beginning it was tough because I wasn’t used to performing for a few people. People would hire me for school, church, or a festival and I’d automatically have an audience. This was different. I had to drum up my own business. But I’ve gotten over that,” she adds. “If I have five people in the audience I remind myself that those people deserve as good a show as if I had a full house.” 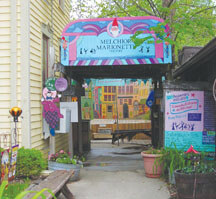 Marionettes are puppets with strings capable of a great range of movement, considered the most complex form of puppetry. “Before we had the written word, every culture had puppetry,” Peggy, who also teaches, says. “It was the vehicle for mass communication. They say that Buddhism was spread by shadow puppeteers going from town to town. Even the word marionette has a religious background—it means, ‘little Mary.’ They used dolls to tell nativity stories.

“All puppetry comes from Asia—shadow, rod, bunraku, marionette—because Asia has a very long history. The glove puppet with the porcelain head came out of Taiwan. The hand puppets are all opera players from Beijing. They would take these small puppet shows out and reenact the opera for the peasants. It was for people who couldn’t afford to go to the regular theater.”

Ten years ago Peggy started Peewinkle’s Puppet Studio, a small indoor theater at 25 E. Henry Street in downtown Indianapolis, where she could produce more complex programs for children and adults with her daughter Heidi Pearson and Debbi Stutzman. But her heart remains in Nashville. “I’m glad to see the powers that be emphasizing the artists,” she says. “The Brown County Convention and Visitors Bureau, as well as the Chamber of Commerce, Andy Rogers—everybody who has been involved in marketing in Nashville—have always been wonderful to me. I’m a very small business that makes a small amount of money but they’ve always promoted what I do. I’m very grateful.”

Melchior Marionette Theatre is symbolized by the sycamore tree that grows along one side of the theater, providing shade in the summer and a picturesque fall of leaves in autumn. “It started to grow the year I started,” she says. “When I do shows in October I have about six inches of dry leaves. A lady once said, ‘I love this theater, especially since you’ve taken the trouble to bring all these leaves in here.’ I said, ‘M’am, if you just look up you’ll see that they’re all from my tree!’

“The main reason I stay is because when I ask an audience, ‘How many of you have been here before?’ three-fourths of them raise their hands.”

Melchior Marionette Theatre is located on the west side of South Van Buren Street near Franklin. Performances in June feature the Comedy Cabaret on Strings, a twenty minute variety show of music and nonstop action before a colorful backdrop of hand-painted street scenes. Shows start at 1:00 and 3:00 pm on June 7, 14, and 21. Tickets are $4. Popcorn is free! Call 800-849-4853 or write <peewnkle@earthlink.net>. Their websites are at <www.melchiormarionettes.com> and