When Kara Barnard opened Weed Patch Music Company with Jeff Russell a year ago her expectations were to provide local musicians with a resource to share information, a place where the very best instruments could be found, and where beginners could discover a lifelong avocation. She’s met all these goals and more.

“It’s been a great year,” she says during a quiet Sunday morning. “Visualizing what I wanted this store to become has had 100% to do with it. In December we had an awesome month. I think it’s because when people come in here I can do a one-on-one with them and take the time to show them the more interesting instruments.”

Communication is important to Kara. “I like to be able to tell who built the instrument, what their workshop looks like, a few interesting stories about them. I want people to understand about the time that went in building the instrument, how many hours it took, and how painstaking that was for the luthier. There is so much that goes into every one of these instruments—I’m just a little obsessive,” she adds laughing. 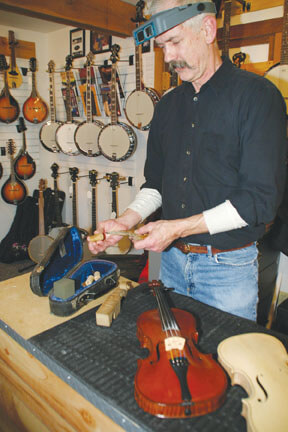 Local luthier Bruce Taggart discussed his woodworking techniques at the shop in February.

“I think luthiers are the coolest people in the world,” she continues. “Everybody asks me what the difference is between a Volbrecht or Clint Bear guitar and the guitars that are mass produced. It’s like an artist with his brush. You have brushes that are good and when you run it across the canvas it does exactly what you feel in your mind’s eye. An instrument is just like that. You just breathe on a Volbrecht or Clint Bear guitar and every color in your head comes out. That’s magic. You can look at every instrument in here and see the hours of work—sanding, rubbing, and fine tuning.

“I could be making a lot more money if I filled this store up with train whistles and plastic drums and things like that but I’m just not going to do it. I refuse. It’s not about making a ton of money, it’s about maintaining my integrity and feeling good about the instruments I’m selling. As long as I’m being true to myself and everybody that walks through this door, my energy level will stay up. When I make my compromises is when I feel my energy level going down.”

Integrity is important. “If I don’t think a person needs an instrument I won’t sell it to them. Yesterday a guy wanted a ukulele because he had failed with guitar. I tell my students when they think about switching instruments that more often than not they’re just going to switch their frustration to another instrument. I talked with him for a long time. We sat down with the mountain dulcimers and that clicked with him. That’s something he can play and build back up to the guitar.

“I’m more of a teacher when I’m in here selling instruments than I am a retailer,” she adds. “Everybody that comes in here I’m directly influencing the relationship they’re going to have with their instrument and their relationship with music in general and I feel that.”

Barnard grew up in a musical family. “My Mom put herself through music school on a vocal scholarship,” she says. Her family played and sang all the time. “On my Dad’s side of the family everybody plays. It was bound to happen that they would create musicians too.”

Anyone who has witnessed Kara’s performance, the ease and joy with which she communicates with her audience, would be amazed to learn that the first time her parents tried to lure her onto a stage she refused to go. “I was probably three or four years old and I was backstage in the Linton High School auditorium. They had me dressed up—which I did not appreciate at all—in this long dress. It made me mad. They told me and a little boy in a coonskin cap that we were going out on stage and sit at opposite ends of a bench. When the piano music started playing the little boy was suppose to scoot over until he was sitting next to me. We were to put our arms around each other and the curtain would go back down.

“I flat out refused. To this day I remember being backstage, seeing that curtain go up, that empty bench, the music starting, the auditorium full of people, and that empty stage. That was my first experience with stage anxiety.”

Her sister Pamela is seven years younger. “She started singing when she was a tiny little thing and had such a great voice. I had her singing harmony with me and it was so cute because she was so little. I would take her to my gigs and sometimes she would balk at the last minute. We sang and performed together through the ’80s. There’s nothing like being with her on stage. We play off each other and have so much fun.”

She and Pam have produced a new CD together, Flying Down King Street. “When her babies came along I started writing again. She’s got a three year old and a nine month old. I’m absolutely crazy about them. It’s natural for Pam and me to sing together just because the kids enjoy it so much.

“I’ve been fortunate,” she concludes. “I’m the luckiest person in the world.”

You can visit Weed Patch Music Company at 58 East Main Street, Nashville, next to the courthouse. (812) 988-1180. Visit their website at <www.weedpatchmusiccompany.com>. Kara’s websites are <http://karabarnard.com/>, <www.myspace.com/karabarnard>, and <www.myspace.com/barnardsisters>. To watch Kara perform keep an eye out for upcoming events at Muddy Boots in Nashville.