“The useable past” is Jon Kay’s term for what the Center for Folk Traditions, for which he is director, offers the public. He’s also fond of the word “continuity.” Everyday people around Indiana apply time-tested standards of craftsmanship to all manner of everyday activities—broom-making, sheep-shearing, persimmon pudding-baking—thus perpetuating those standards for future generations to use as a guide. The Center for Folk Traditions lets us look at real people in these fields and more putting those standards into practice.

Located at 46 Gould Street in Nashville, the Center is a hub for the programs and projects of Traditional Arts Indiana. T.A.I. is a joint venture of The Indiana Arts Commission and the Folklore and Ethnomusicology Department at Indiana University. The Center hosts performances, workshops, exhibits, and audio-visual presentations.

“I want to stress that this is a center, not a gallery,” says Kay. “We‘re becoming more what the community wants us to be and what artists around the state need us to be.” He says that it is also a training ground for the next generation of professional folklorists, noting the “amazing group of I.U. graduate students from all over the world” on staff. 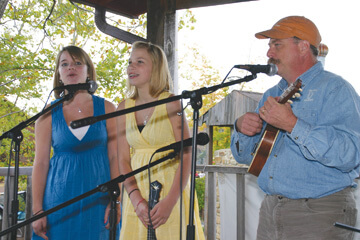 Ukulele maker Geoff Davis with his daughter Phoebe to his right and her singing partner Molly (duo as “Folly”) at an afternoon performance on the porch.

The breadth of the creative activity showcased at the Center can be seen in recent and upcoming events there. On October 18, a Noblesville ukulele ensemble, including Geoff Davis and his fourth generation ukulele-playing daughter, gave a concert. On Saturday, November 15 at 1:30 pm, Bill Bailey of Indianapolis will present a musical-washboard-making workshop. Kay and his assistants are working on an exhibit of the work of 99-year-old walking-stick maker John Schoolman from Kosciusko County. Plans for next year include folk life surveys of northern Indiana’s Mennonite and Amish population as well as the state’s Hispanic immigrant communities.

The Center is an outgrowth of the overall scope of activities of Traditional Arts Indiana. Folk life surveys are at the core of what T.A.I. does. Currently, staff member Ilze Akerbergs goes into a town and begins asking questions. “It’s a little like the game Seven Degrees of Kevin Bacon,” explains Kay. “Your first contact generally tells you who you really need to talk to, and it goes from there.” When Akerbergs finally meets possible subjects, she asks them about their notions of how their creations foster community, how tradition enters into what they do, and the question of aesthetics. Kay says, “We want them to tell us what makes a well-baked pie, or a well-bred coon hound.” So far, T.A.I. has surveyed thirty of the state’s ninety-two counties.

There are lots of components to Indiana’s people, says Kay, noting that “Fort Wayne has the largest Burmese population outside of Myanmar. The Jasper area is rich in Germans. Northwest Indiana has a lot of Serbs.”

Kay is quick to point out that more than ethnicity goes into the shaping of customs and institutions. “I’m a big believer in the power of the individual,” he says. “These amazing people become catalysts within their communities.”

Brown County native Kay’s own passion for Indiana’s folk traditions can be traced to an I.U. folklore class he took from Warren Roberts, as well as his own dulcimer playing. He spent several years “traveling the country, performing and selling cassette tapes.” He got married, resumed his studies, earning a master’s degree in folklore from Western Kentucky University in Bowling Green. While working at the Florida State Folk Culture Center, he directed the oldest state folk festival in the country. Then the position at T.A.I. became available.

The Center and T.A.I. plan to continue the array of activities they currently undertake, such has training for artists that includes steering them toward grant resources, hosting a stage at the State fair as well as the State Fair Masters awards program, and making ten-minute documentaries for distribution to libraries throughout Indiana. “Again, this shows how the Center is a real learning place,” says Kay. “We work with some wonderful young videographers who go on to great success.”

The Center celebrates the art that goes into the everyday activities that make up our life as a society. Some of it is generally recognized as art, but as Kay points out, some of it is “not what would necessarily get juried into a craft fair. We address the experience people want to have of real people doing real things.”