Coming from a family of writers and artists John was always encouraged to express himself. “My mother didn’t want me to be anything but an artist since I was ten years old,” he remembers. “She told me that I would always have art supplies, if you can imagine what that’s like for a little kid. I was so lucky but I didn’t know it at the time. Only later on did I find out how hard other kids had to fight their parents to artists.”

At Purdue John studied both the fine and the martial arts. “I was the first white member of a black fraternity at Purdue—all the football and basketball players and me. When I graduated I was offered a job at the Chicago Art Institute. I went up there and saw that concrete, asphalt, steel, and glass and went, ‘Uh-uh, do I want to be around what man made or what God made?’ And so I chose the woods over the city—probably one of the dumbest career moves I ever made in my life but I’m happy to be in the woods.”

In 1971 love of nature brought Sisson to live in Brown and Monroe counties. “I grew up in Marion County in the woods, believe it or not, outside Indianapolis,” he says. “My father was a judge and I grew up in a 2½ acre spot with all kinds of fruit trees, a beautiful place that Wilbur Shaw (three time winner of the Indianapolis 500) had bought for his parents but it was too far out in the country for them. It was on a gravel road: a farm to the north, a swamp across the street, and the rest was surrounded by woods—38th and Emerson!” he laughs. “There’s an apartment complex now where our house used to be.”

John has been visiting Brown County since before he was born. “My family came down to visit relatives so Brown County was always a part of my blood,” he says. Living for a time on Lake Monroe, he “watched an eagle raise its babies and fed raccoons out of my hand.” He fed hundreds of birds and other animals, once teaching a blue jay how to whistle Blues in the Night. “I love animals. I’m big on critters. I was absolutely in heaven.”

Yet somehow he felt compelled to return to Indianapolis. “It was like, ‘Lord, take this cup from me. I have no desire to live in Indianapolis.’ I stayed up there for ten years when I thought it’d be two. I was living with my cousin and could hear cars pull up to the stop sign. I could hear people talking on the sidewalk. I could hear sirens a half dozen times a week. In Brown County if you hear somebody outside your house they better have a doggone good reason for being there. If you hear a car pull up that’s an event. If you hear a siren, that’s catastrophe,” he laughs. 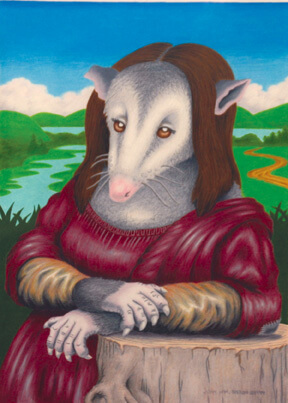 He stayed so long because he’d met Nancy Noël, an artist whose paintings express spirituality and the love of beauty. She decided his poetry was just the thing to complement her illustration. “Every time I was getting ready to leave she’d say, ‘Let’s do another book!’” he recounts. “She told me that I could write whatever I wanted and she would do the paintings. I took it easy on her. I knew that she had a whole bunch of paintings of angels, so I decided to write about Grace and Hope and Charity.

“She’s the most famous female artist coming out of Indiana. That’s the irony. I’ve sold more books of poetry in the last ten years, probably, than any other poet in the state of Indiana and it’s all because of Nancy. She’s so popular that you could write Chinese upside down and it would sell.”

But after three books with Noël John couldn’t take living in the city any longer and moved back to his beloved woods, in a home he rents from Hank Swain. “I often tell people, ‘You take all the gold and diamonds in the world and I’ll take all the plants and animals and who do you think will be richer?’ Down here you’ve got this incredible abundance of plants and animals. I feel rich.
“It comes back to that growing up in the woods thing. I absolutely love Brown County, love the people. It’s so familial—almost tribal. It’s based on helping your neighbor fix his fence and patch his roof. I enjoy the different kinds of people you meet here in all different walks of life. It’s fun being around creative people, not just the people in the visual arts, but the musicians and the writers.

“And being around all these living creatures, that’s the biggest bargain of all.”

John feels comfortable with what he has accomplished. “I’ve got this book with Nancy that’s helping people spiritually. I remember my father telling me that one of our family precepts was, ‘Leave the world a better place than the way we found it.’ I could die right this second and I’d feel that I’d left the right kind of footprint on the planet.”