Photographer Kyle Spears is one of those artists whose unassuming personal demeanor, on its own, wouldn’t indicate anything like the full power of his work. He’s given to matter-of-fact statements about his view of photography’s role, his approach to technique and career considerations, preferring to let the viewer form his or her own relationship with the images he creates.

His subject matter covers a wide range, but there is a moment-in-time continuity of approach that makes his work recognizable. He cites photojournalism pioneer Henri Cartier-Bresson as a major influence. “Along with specific occurrences, he liked to use architecture as a subject, which is something I find myself drawn to as well,” says Kyle. 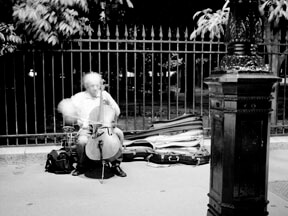 His interest in architectural shapes makes for a lot of urban and small-town scenes in locales ranging from Japan to France to Nevada. “Last Recital” captures a French cellist in mid-performance on a sidewalk in front of an iron fence. The focal point of “Fragile” is a billboard advertising jewelry sporting a waiflike grime-covered model, surrounded by Tokyo high-rise apartments and a restaurant’s outdoor-dining balcony. “Early Morning on the Strip—Sin City” depicts the worn-out-and-hung-over feel of Las Vegas’s casino district in the first rays of dawn. Often, the details of buildings he chooses as subjects, such as doors or sculptures, are in need of paint or repair. “Decay is a recurring element of my work,” he notes.

He is especially interested in black and white photography and the possibilities of film cameras. The darkroom phase is as vital to what he creates as the moment of shooting the image. He explains that it’s a “balance of control and mystery,” much like pottery coming out of a kiln. “I’m still experimenting with different processes like lith printing and liquid emulsion,” he says. “I do a lot of toning, too.” 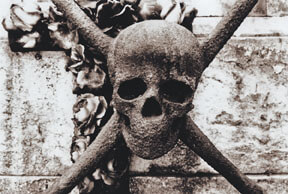 That said, he has produced some striking pieces in color using a digital camera. A thatched roof in Japan and a narrow street in Arles, France exemplify this side of his output.

Spears comes from a creative family. His father Larry is a potter and his mother Janet runs a dance studio. That shaped his personality early on, but it wasn’t until college that he found his passion in a photography class. He graduated from Indiana University with a B.A. in Fine Arts and a minor in Art History in 2004. He attended a school-sponsored trip to France and Britain that year which began a tradition of traveling on a photo trip each winter. He says, “Japan is by far the coolest place I’ve been. The culture, history, and intriguing aspects of the Japanese character just fascinate me.”

He described marketing and determining what sells as “a constant learning curve.” Aside from a few sales at the gallery he shares with his father on State Road 135 on the way to Story, he mainly makes his living at shows. “At I.U., nobody told us about shows,” he says. “I guess they have a controversial connotation since you never know what kind of booth yours will be next to, but they’ve worked out quite well for me. The shows I participate in are juried by professionals.” He has exhibited at the Fourth Street festival in Bloomington, the Talbott Street Art Fair in Indianapolis, the Clayton show in St. Louis, and the Tennessee Arts and Crafts Association’s show in Nashville, Tennessee. He enjoys networking with other photographers and has been influenced by work he’s seen exhibited there.

If he were to give advice to a young person aspiring to a photography career, he’d steer him or her toward workshops. “They’re all over the world, you can register online, and they get quite specific as to what you’ll learn,” he notes. “College was valuable for me, but it was mostly conceptual. Any continuing education I do will be workshops.”
Spear’s work can be viewed at <www.spearsphotography.com> and he can be contacted at <kyle@spearsphoto.com> or (812) 988-1287.