Mary Pendergrass demonstrates a basket making technique in what was once the early Brown County artist L.O. Griffith’s studio. photos by Cindy Steele

Mary Pendergrass has dedicated her life to the study and practice of the art of weaving—especially the creation of basketry.

“I’m the only weaver in the family,” Mary says “I’ve always loved it and have explored all areas of fiber. I got into basketry when our two children were in high school. Basketry is portable when you’re driving kids to everything,” she laughs.

Brown County, of course, has a fine tradition of basketry, the best known being the Bohall family of southwestern Brown County. “They were farmers who followed their craft as a supplement to the farm routine,” Dillon Bustin wrote in If You Don’t Outdie Me. “The Bohalls found that they could sell as many baskets to tourists in Nashville as they could bring to town.”

When not working or teaching at her studio, Mary is likely to be at the Old Pioneer Museum demonstrating weaving techniques or working with children’s groups to keep the old tradition alive. “That was one of the draws coming into Nashville—the old folk-art traditions. Everyone is involved in some way keeping that knowledge alive.” 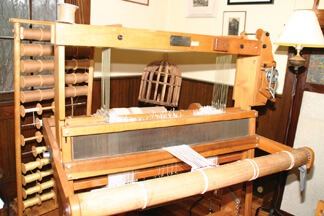 A nurse by profession, Pendergrass has lived throughout the country, meeting local weavers and learning their style. “The fact that we’ve lived in different parts of the country has made me appreciate every place for the special things that each place has.”

In Boston she discovered Nantucket basketry. “It’s a unique American basket form, a derivative of barrel making,” she says. “It was invented by a group of men on Nantucket Island, forty miles off the coast of New England. They manned floating lighthouses nine months at a time with nothing to do.” They used scrap wood and Chinese cane to create beautiful, sturdy baskets for their loved ones back home.

“Most basket forms were developed worldwide and passed around. Even the Bohall basketry came from the German technique,” she says. “The family made the baskets out of long strips of oak that were pulled through a little punch—a hole in a piece of metal—to make them uniform.”

It was a third grade school teacher who instilled Mary with a love for the art of weaving, knowledge she’s dedicated to passing on. “I taught a junior high class with kids who wanted to learn Appalachian basketry. I said, ‘I’m warning you: when you finish this class you’ll never be able to look at a basket the same way again because you will understand what was involved in making it. You’ll have a deeper respect for the hands that make the basket.’

“I’ll keep doing basketry along with teaching, spinning, and weaving. Kids are given a lot visually but they don’t get enough hands-on experience. I think the tactile experience of art—whether it’s painting, pottery, weaving, or carving—carries through in ways that are hard to measure.”

Three years ago she and her husband moved to Nashville from Boston to be nearer their families, buying the old L.O. Griffith home. “It had been neglected for thirty years and it seemed a shame to see the old historic place go. It’s a great workplace.”

Griffith worked in the large light-filled studio making prints on days he couldn’t get outside to paint or draw. He built cabinets for the short wall beneath the windows, painting their panels in a nonchalant, abstracted way. The home is on a cul-de-sac clutching at the side of a ravine, overlooking the village of Nashville, nearby the homes of many of his friends and fellow artists. 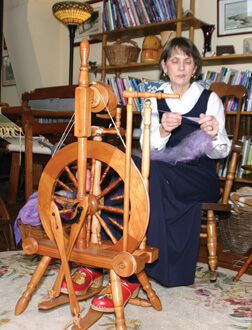 “When we moved in there were bats and pea-green walls,” she remembers. “So much stuff had been dropped on the floor over the years it was black. There was a studio, a living room, and a loft up above—where they lived. When we uncovered the chimney it was built on wooden stilts.”

The spirit of Griffith continues to live in the studio where he worked for so many years. The shelves are filled with books and where they are not is Mary’s collection of basketry from throughout the world. A loom sits in the corner where Griffith’s press used to be. “Artists need quiet and peace to be creative but they can get isolated if not careful,” she says. “I think that’s why the artists in Nashville socialized. They needed the connection to each other, the cross-pollination of ideas. That’s been a theme throughout all I’ve done. People can’t decide what an artisan is and what an artist is. I don’t really care. The definition of an artist or an artisan is ‘passion about what they are doing.’ If you really love to do something and feel compelled to do it, that’s what matters. Not the label that goes with it.

“It’s not about the product, but about the process. Art and the pursuit of art are valuable because they teach not only the artist how to see but people looking at the work to look beyond what they see. Whether it’s writing or painting or playing a musical instrument, if it’s a passion it’s worth doing. That’s the message I try to get through to students.”