Andy Rogers at the Seasons Lodge in Nashville.

The Seasons,
Back and Better

It was the Christmas season when Andy and Fran Rogers got the news. “It was the first night we were at our house on the Gulf Coast of Alabama,” says Fran. “We got a call at 3 o’clock in the morning that the fire was going on.”

The calamity was happening at their Seasons Lodge in Nashville and before firefighters gained control half the complex had been destroyed. Arson was the cause, a suspect considered, but his culpability was never proven. It reminded old timers of the fire that had taken his father’s Nashville House in 1943.

There was doubt they would rebuild. “When something like that happens it takes a while to get over the trauma of it,” Fran says. “We had to start from the beginning with the financing and everything else because we had insurance on the guests but not the building.” 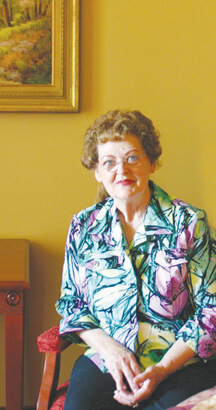 When they finally decided to rebuild it came in part due to a sense of responsibility to their employees. “It’s not the normal business,” Fran says. “When something goes down like that and all those people who worked for you don’t have a job—wonderful people who have been with us for years—you feel obligated to put something back for them.”
“We’ve got some old timers who have been with us for over 35 years,” Andy adds.

“During the wintertime the waitresses and some of the cooks worked for us at the Nashville House making apple butter. We kept an employee at the desk to keep contact with the public. We kept our general manager on, the bookkeeper, and the maintenance people. It’s not cheap to do it that way, either, when you don’t have any money coming in.”

Fortunately, the east wing of the building remained with its 20 rooms, as well as the restaurant, pool, and conference center. “We kept this and the dining room open part-time until we began to get lots of deliveries for the rebuilding. We shut it down last July for the builders. There was a lot of noise.”

While the original Seasons was built by out-of-state contactors, who made most of the decisions about its construction, Fran and Andy vowed that things would be different. “This time we did it our way!” she says about the look and feel of the building. The couple thought about the features that worked at other resorts before deciding that their new rooms, like Impressionist painting, needed plenty of light. Likewise the hall had to be wide and airy. Suites would feature extra-large balconies overlooking the farm in the valley below. There would be a children’s playground out near the pool, and all the rooms would feature art inspired in and by Brown County. Each room would have all the amenities that visitors have come to expect.

“It’s a little bit more luxurious than it was in the past, without being ostentatious,” Andy states quietly. “We’ve made a pretty good name for ourselves over the years and we try to maintain it.”

“People absolutely love the new rooms,” Fran adds. None of the furnishing was mass produced. The quilts and curtains were made in Carmel, the furniture in Jasper, the contractor hales from Trafalgar. “A couple of the women and I went to Indianapolis and between us decided what would work well. We had a great time doing it. But sooner or later you have to stop doing that and start paying bills.”

“She’s done most of the selection on the interior,” Andy agrees. “I worked with the architect on the exterior design. We tried to keep it with as much of the flavor of Brown County as we could. The way we’ve arranged it, we’ve tried to bring the outside in—it looks out over the countryside.”

It took four years for Jack Rogers to rebuild the Nashville House. His son accomplished rebuilding the Seasons Lodge in two and a half. Its destruction could have devastated Andy and his wife but instead it gave them an opportunity to do something important. “I’ve got a stack of mail that people wrote us saying how sorry they were and hoped we’d build back and how much they loved it here,” Fran remembers.

“The people who live here have a certain appreciation of Brown County,” Andy says of why, with all of the competition out there, people return to Brown County. “We still have a certain amount of popularity,” he insists. “We do what we’ve always done—attract groups who want to get out of the big cities.”

“People who want the feel of Brown County,” Fran finishes. “Bloomington is a city, Columbus is a city, so there is always going to be those special reasons for people to come out to Brown County.”

Call 1-800-365-7327 for reservations or information on group rates and package deals at the Seasons Lodge. Their website is: <www.seasonslodge.com>.