Mountain bikers from states far and near have joined the ranks of hikers, campers, and artists who are drawn to Brown County’s glacier-carved hills, ridges, and ravines.

Bikers from around the country have discovered the twenty-plus-mile network of trails within Brown County State Park that offers variety, excitement, and scenic beauty rivaling that in any other locale. “On a recent weekend, every license plate I saw in the parking lot near the trailhead was out-of-state,” says Len Logterman, a local mountain biker who helped build the trails. Trail designer Alex Stewart notes recent visitors from North Carolina and South Carolina. Bike magazine included the Brown County trail system in its March 2009 feature “33 Best Rides in North America.”

While more trails are in the works, “we have enough miles in here now that it’s worthwhile for someone from, say, Chicago, to come ride part of it, get a place to stay, take the spouse out for dinner that night, and come back to ride more the next day,” says Logterman. What criteria prompt a national magazine to rate the Brown County system among the continent’s best? According to Stewart, variety and trails that bikers of each ability level can enjoy are the keys. “Grizzled veterans can find some fun here,” he observes.

“They make great hiking trails, too,” says the park’s property manager, Doug Baird, who reviewed and signed off on the designs, although he admits to some sections being “a little scary for me on foot.” 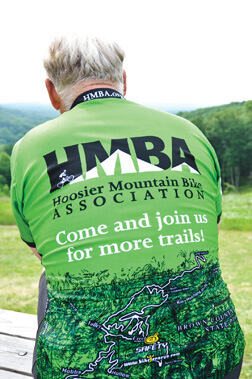 “The North Tower Loop was the first trail built,” says Logterman. “It’s not very technical,” a biking term describing riding conditions requiring a combination of speed and balance. “It doesn’t have any logs or ledges. At Hesitation Point, we’ve intentionally built what we call a rock garden for the more experienced riders.”

Stewart, who turned his volunteer experience into an Indianapolis-based business, Spectrum Trail Designs, says, “We had to learn how to build trails the hard way.” He and some fellow bikers established their credentials with Town Run Trail Park in Indianapolis and a ten-mile trail in Westwood Park in Newcastle. “By then we had a nice portfolio,” he says. “We went to a lot of training sessions conducted by IMBA [the International Mountain Bicycling Association].” The trail builders took their Brown County proposal to the state Department of Natural Resources which “took a leap,” according to Stewart. Stewart was the chief designer. The building was done by a team of volunteers.

The process of designing and building trails starts with topographical maps, which one obtains from the U.S. Geological Survey. Likely routes are hiked, “and then you put flags down,” according to Logterman. In the case of the state park, “that’s when we brought Doug [Baird] in.” For trail sections financed by federal grants, environmental impact studies must also be conducted. Baird says the Brown County trails are “minimally intrusive” on indigenous wildlife. Then the hands-on building gets underway. Teams of volunteers clear brush, remove logs and cut grass.

Maintenance is important, particularly drainage work. Organic matter tends to pile up on the side of the trail, which can result in pooled rainwater, a hazard for bikers. The Brown County trails boast a generous offering of switchbacks. These are necessary due to the fact that trails can’t be a continuous matter of going straight up and down hills, and they also provide fun challenges to riders. 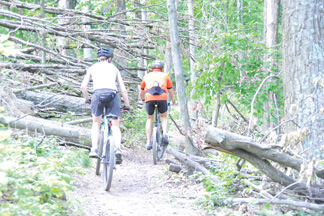 Bikers can ride at night, up to the park’s closing at 11:00 p.m. “It can make a familiar trail seem new,” says Logterman.

There are a number of excellent resources on the Web for finding out more about the Brown County trail system. The Hoosier Mountain Bike Association’s website’s forum <www.hmba.org/smf> has a section providing trail-building updates and other discussion threads related to Brown County. <www.browncountymountainbiking.com> features a blog, message board, videos (generally shot with cameras attached to riders’ helmets, and generally thrilling to view), and a link to a Facebook page.