Thomas Wolfe famously said, “You can’t go home again.” That may be true in a lot of cases, however, this June Bluegrass fans from all over the country will come home again to the 43rd annual Bill Monroe Bean Blossom Bluegrass Festival.In fact, there is a big ol’ sign up over the main stage that reads, “Back Home Again in Indiana.” When you get to your campsite you discover that it’s a neighborhood of folks who have come together for love of the music. Bill Monroe used to greet the audience saying, “Howdy, neighbors, howdy.”

The Bean Blossom Festival got started back in 1967, the brainchild of Mr. Bill Monroe. The first couple of years were a little rough and primitive. The park consisted of a big ol’ primitive barn that was used for square dances and country music concerts on weekends. The camping and the privies were primitive. The barn is gone, replaced by an outdoor stage set in a natural hillside amphitheater. The campgrounds are large and accommodate RVs (with all the fancy hookups) although you can still pitch a tent or just sleep out under the stars if you want to. There are several little log cabins for rent if you get your bid in early enough. And there is almost always a doctor in the house…Doctor Ralph Stanley, that is.

The good doctor, star of stage, radio, records, and the silver screen is almost always in attendance with his Clinch Mountain Boys and this year is no exception. Along with Ralph there are over 50 bands signed up for the festival. Old timers like Jesse McReynolds, J. D. Crowe, Bobby Osborne and Paul Williams will be on hand, as well as a passel of exciting new acts such as Dailey and Vincent, the Grascals, and the Steep Canyon Rangers. 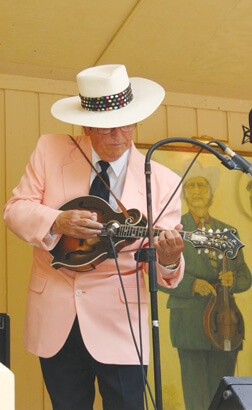 Appearing for the first time at Bean Blossom will be the Dan Tyminsky Band. Dan, long time member of Allison Krauss’s Union Station, performed the “Man of Constant Sorrow” for George Clooney to lip synch to in the film “O, Brother, Where Art Thou?” Of course Dr. Ralph brought down the house with his rendition of “O Death” in the same movie. There isn’t room in this article to talk about all the rest of the more than 50 top flight Bluegrass acts such as David Davis and the Warrior River Boys, Karl Shiflett and the Big Country Show, James King, III Tyme Out, Don Rigsby and Midnight Call, and Cadillac Sky.

A lot of folks may not know this but Bluegrass music has become an international phenomenon and to prove it, this years’ artist lineup is joined by an Australian band “Bluegrass Parkway,” the “Country Saloon Band” from Russia, “Hard Ryde” from Canada, and a great Japanese band, “Tanzawa Bluegrass.”

If that ain’t enough to satisfy you, you can start your own group over in the campgrounds and/or participate in the Bill Monroe Sunset Jam on Friday. So, if you’re of a mind to completely immerse yourself in all styles and variations of the Bluegrass tradition Bean Blossom is the place to be.

There is even an event just for kids, the Youth Bluegrass Boot Camp. 15 hours of professional instruction are offered in banjo, guitar, fiddle, bass, and mandolin for all levels of young musicians, beginner through advanced. The ticket prices are $5 less this year for young folks 13 to 16 years old. I am always amazed at the talent these kids display and the encouragement they receive through the Boot Camp.

One of the most important components of home is home cooking. There are plenty of food purveyors waiting to serve the Bluegrass family at Bean Blossom. Among the delicacies offered are fried green tomatoes, roasted corn-on-the-cob, fish filets, several kinds of barbecue, steak sandwiches, kettle corn, and even exotic dishes from the Far East. The Tuesday evening bean supper is a festival tradition.

The park provides commodious camping at a reasonable price. You can camp your RV for $20 to $25 per day, and that includes water and electricity. Tent camping is $6 per person. Any kind of camping is the perfect way to meet instant friends and neighbors.

The entertainment is first class and copious. The food is delicious and diverse. And the cost of time spent at Bean Blossom is better than reasonable. Every year about this time I ask myself would I rather pay for a week in the south of France—maybe a Caribbean cruise, rent a villa in Tuscany—or would I rather just gather in with the home-folks at Bean Blossom.

I don’t have to think twice, really. I hear the food is good in France, the rest and recreation is supposed to be great on the cruise liners, and Italy has fine weather. But I would just be another tourist and stranger at any of those places. I say keep it home, keep it real, and keep it cheap.

Come on home to Bean Blossom, neighbor, there’s a friendly welcome waitin’ for you.