The White Lightning Boys at a WFHB event in Story. photo by Jim Manion.

For years Community Radio WFHB in Bloomington was the ghost haunting Brown County hills. It could be heard along ridges and down lonesome valleys but faded away at the most inconvenient and unlikely times. Brown County musicians received some airplay, Brown County news and events got some notice but, like the signal, coverage was spotty. Then, after years of planning, WFHB finally got the go-ahead from the FCC to construct a translator on Lanam Ridge.

“We had a short time to raise the money,” news director Chad Carrothers remembers, “so we started to have meetings in Nashville with a group affectionately known as the Brown County Barnraisers. Intertwined in the conversation was ‘What is Brown County going to get out of this?’”

“We knew that Brown County was fertile ground for WFHB,” adds station manager Jim Manion. “What surprised me was the enthusiasm. The overall idea was to expand our listening area, gain more listeners, and more listener support. It’s been gratifying to see the ongoing efforts there. We’ve engaged with a whole range of people and businesses.” 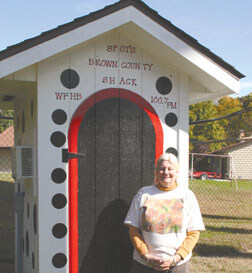 Pam Raider at the translator on Lanam Ridge.

Pam Raider is one of those Brown County natives who helped spearhead the effort to fund the translator. Pam continues her involvement by serving on the WFHB Board. She’s also involved in the production that has become known as the Brown County Hour. “My original vision was a skit thing that would revolve around the Liars Bench idea—to sort of stretch the truth. We would do theater, interview local artists and musicians, and have a Brown County bulletin board.

“After the first meeting I thought, we’ve got all the elements right here!” she smiles. “Now if everyone stays enthused and we keep plugging away….”

“A lot of that process involves communicating with people what it takes to go from talking to doing,” Carrothers adds. “It’s a lot of work. We have a standing offer for anyone who wants to be a Brown County reporter for the news.”

He sees the Brown County Hour as an “almanac show—a survey of news, culture, history, people, arts, and other interests. The big challenge is that when you get a bunch of people excited, the ideas start blaring out, but there’s no focus. That’s the role I’m trying to play—the facilitator. I’ve a good track record of guiding people from idea to fruition—going from talk to walk.”

Carrothers thinks that it’ll take twenty to thirty people to provide the program with regular content. “We have our best success when we let people pick out the role that is best for them. That tends to be more enjoyable and more empowering. The sky’s the limit after that.”

“Local involvement is the nature of a place like WFHB,” says Jim Manion. “From programs like Youth Radio to Golden Age Radio it drives home the point that while we all have different perspectives, they’re all valid.”

“I take seriously this notion of local community radio. When you’re serving Bloomington, Ellettsville, and Brown County—what’s the common denominator? You have to be careful that you don’t lose track of the people that you’re here to serve.”
“The first half of our mission statement is to celebrate and increase local diversity,” Jim Manion continues. “Brown County culture is very rich, musically and in the creative arts. It’s great to hear that flow into our sound but, as we’ve realized with everything at the station, good stuff doesn’t happen overnight. It’s not like instant coffee, you don’t just add water. You have to have time and patience.”

For the last two years WFHB has celebrated summer in Brown County with an annual music festival at the Story Inn. “We’ve also had a benefit at Mike’s Dance Barn,” says Manion, “and a couple of nights at the FigTree in Helmsburg, where they’ve started producing radio theater. There has been an uptick in Brown County musicians getting on the air, most notably the White Lightning Boys. It’s a slow process but it feels like we’re connecting the dots.”

“We have folks who listen in Martinsville, Mitchell, Paoli, Bedford, and Nashville,” Will Murphy concludes, “but you have to think about values and mission. It’s not about getting bigger, it’s about serving the community—being live and being local, being diverse.”

“Too many times we spend butting heads over politics or religion,” says Raider, “but this seems like a project where everyone can go in one direction.”