Should We Feed the Deer? 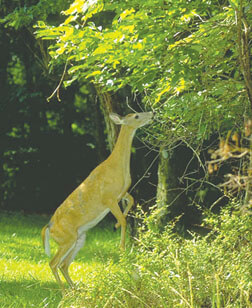 Homeowners in our area have debating on whether to feed or not to feed the deer. You might assume by feeding, it means to purposely put out corn or apples to attract them; to some homeowners, this is a common practice and assumed harmless. But “feeding deer” can also be done unintentionally if deer raid flowerbeds and gardens.

Reader comments in newspaper letters to the editor indicate a wide range of feelings and levels of appreciation: “I feed birds, so why not the deer,” says one homeowner. “They will starve once I start; I can’t stop now,” says another. And the one economically-motivated comment that cannot be ignored: “Doesn’t my neighbor know I spent a lot on money on landscaping? The deer that he feeds come by and eat my plants!”

Concern of too many deer in many Indiana State Parks was already raised in the mid-1980s. A deer study task force was assigned by the Natural Resources Commission to address the oversized population at Brown County State Park (BCSP). After nearly two years of study, lethal removal of deer using the public hunter was found to be the most effective and ecologically sound. It was also the most cost-efficient and manageable over other options like predator release, fencing, trapping and relocating, and sterilization. Protected and with no predators, excessive numbers resulted in devastating ecologic damage. Since the first BCSP hunt in 1993, all DNR state parks and reservoirs now conduct periodic hunts to keep deer at maintenance levels. A recovering understory with abundant tree seedlings and deer still visible to visitors means Indiana State Parks have met their objective of ecologic restoration.

But how do we control deer in suburban environments? The sight of deer in the outskirts of cities and towns is common across the country as ever-adaptable deer find man’s changing environment to their liking. Deer aren’t found only in woodlands, open country pastures and agricultural fields anymore. We see them everywhere. But the use of firearms can’t work in neighborhoods where deer (and people) roam freely. Is eliminating them even possible? Numbers could be reduced, but it won’t take long—there will be more to follow.

Humans living close to humans require compromise. Most neighbors know this. The noise produced, hours kept, even the color of a house can be closely scrutinized by some neighborhood associations. If there are no neighbors and a house is off by itself, what the homeowner does is of less impact. If a yard is fenced, boundaries are determined. Without a fence, property lines are still known. But wild, roaming, and hungry deer don’t respect fences, boundaries, or off-limit flower beds. To them, homeowners unintentionally set the table—a veritable smorgasbord of delectable treats awaits!

As a biologist, I know wild animals don’t need people to get by. The term wild implies no intervention. Supplemental feeding in the mid-West for any kind of wildlife isn’t necessary—ever. We stress this at most nature programs. As a naturalist, I know people come to parks purposely to see wildlife, and we present talks on how to attract wildlife, particularly birds. We mention feeding birds is for the sheer enjoyment of seeing them up close. Do birds absolutely require bird food offered every day? No. They are opportunists and come by feeders along with visiting natural areas for food. Bird feeding isn’t as controversial, nor as potentially damaging as feeding deer. Since cohabitation with deer is our fate, decorum must enter in. We know what happens with increasing deer/human confrontations: vehicle accidents, aggressive or tame deer, loss of property value, and strained neighbor relations.

I can’t make suggestions to particular situations without knowing all the facts. What I can suggest is neighbors need to talk with neighbors. If a homeowner purposely feeds deer and neighbors see damage to their plants, feeding should stop. If too many deer are seen, lands nearby with less residents and adjacent natural areas need to be regularly hunted. Owners of those parcels should invite the inquiring hunter. In some cases, and meeting with limited success, neighborhood associations hire sharp-shooters who hunt over baited piles of food, at night, after all residents have been notified. Along with a deer plan, conservation strategies are developed and accepted by all.

“But if I like flowers and plants and I need my garden, what can I do?” Certainly knowing what deer like (and don’t like) can help. Fencing, use of deer deterrents (chemical, sound, etc.) and dogs will help keep deer at bay. Soap bars, human hair clippings in mesh bags, sprays, and netting will work, if upgraded regularly. Close monitoring in all cases is mandatory.

Deer have always been associated with people, from early Native American occupancy on. They have always been kept in check by natural predators, or when missing, man steps in and assumes the role. What compounds the control problem is we now have deer in highly developed communities. Residential areas are attractions. We cannot apply what normally works to reduce them so new and creative thinking must preside. Urban biologists, extension staff, and on-line professional hunters rise to meet the demand and are good resources. They often can make valid suggestions to homeowners. They all agree that the less we add to the problem, the better. They also all agree deer are here to stay.