Tommy Writes it in Stone

Brown County is filled with artists, but few have as large of an impact on the local landscape as stone carver Tommy Thompson. Passer-byers of the Pike’s Peak Church of Christ, Rising Star Gymnastics, countless family yards and anyone who has wondered through Antique Alley in downtown Nashville have seen his work. Made out of Brown County stone, limestone, and occasionally granite, Tommy’s signs mark homes and notable locations across the country.

Tommy and his wife, Mary Ann Whitaker, can be found most any day of the year at Through the Looking Glass shop, which Mary Ann started 25 years ago to sell her glass etchings and redwood signs. Tommy works outside the shop with his diamond-tipped drill, carving intricate designs and words into stone, as shoppers and tourists stop to admire his work. Inside the shop photos of past signs adorn the walls and visitors can browse through albums of Tommy’s creations from the past ten years.
Tommy’s reputation as a craftsman even made the cut on the PGA U.S. Senior Open at the Crooked Stick course in Carmel, Indiana this summer. Tommy used a seven-foot-tall chunk of Brown County Stone to craft a display with the senior open logo on the front and water trickling in between the large rock and the protruding logo. Although he normally cannot carve copyrighted images, the PGA granted Tommy a waiver for this piece. 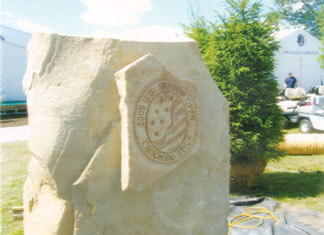 At five-feet wide at the base and two-and-a-half feet thick, the landscape company who commissioned the stone for the event underestimated the difficulty of setting it up. Tommy and a neighbor borrowed a friend’s truck to get the sculpture up to Crooked Stick, but the landscape company’s lift had a limit of 9,000 pounds, not enough for the 9,500-pound creation.

“I could tell by their faces they didn’t know what they were getting into,” Tommy said. Lucky for the landscapers, Tommy and his friend were able to help them set it upright and make sure it was ready for the big event. The crew was actually lucky—the original rock Mary Ann picked for the project weighed nearly 14,000 pounds.
After all that work, Tommy was proud of his piece but was unable to see how the crowds at the golf championship enjoyed it. “I could have gone, they got me free tickets, but I couldn’t get away—too much business,” Tommy said of the actual golf tournament.

Business is indeed busy for Tommy and his wife. “It’s kind of opened up a whole new world,” Tommy says of the work for the PGA event. Tommy and Mary Ann usually work seven days a week, unless it’s a holiday or Tommy has hurt his back from bending over to carve. When they do have free time, they like to go to their 53-acre farm in Paragon and spend time with their 17-year-old daughter, Cassidy.
“Well, we think sometimes it’s our slow time, then ‘it’s here we go again,” Tommy says.

But he’s not complaining. Born in Hammond, Indiana, Tommy was raised in New Mexico. He returned to Indiana after the oil field he was working at shut down. Once in Brown County he worked at the Nashville House for a while, and then in worked in landscaping.

After meeting Mary Ann, Tommy started “playing around with these rocks,” he says. His wife convinced him to come to her shop and demonstrate his stone carving one day, and Tommy never returned to the landscaping job.

“He had hidden artistic abilities,” Mary Ann says of her husband.

“I just had to figure out how to do it,” Tommy notes. After a little trial and error with finding the right tools (he burned up five drills his first week), Tommy not only makes a living off of his craft but also truly enjoys his job.

“We’ll make anything they want, really,” says Tommy. The pictures in the shop show stones with last names, but also pet markers, birdbaths, pictures of motorcycles, “Tiki Bar,” and more.

One family with the last name of Oleo commissioned a sign that read “Oleo Farm: Just a Cheap Spread.”

Tommy shares that sense of humor of the Oleos. “The most fun I get out of it is talking to all the people and seeing where they’re from,” he says. “The more they like you, the more they’ll buy,” he notes with a smile and a laugh. 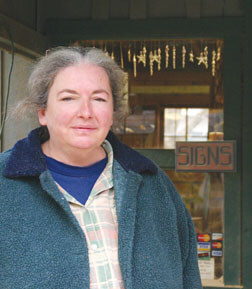 The couple feels connected to their customers and works hard to give them the exact designs they want. Mary Ann says, “It’s like they’re buying a little piece of you,” when visitors take away one of the many signs and stones at their shop instead of a manufactured item at a big box store.

“We have a great time,” Tommy says about working with his wife. It’s a good thing he enjoys the work, because business for this stone carver is only getting bigger.