Skip to content
Bucks and Does Dance in Brown County

Bucks and Does Do Dance
in Brown County

The hall is empty and quiet as Ed and Romelle Schoff crack open windows in preparation for the evening’s dance at the Recreation Building in Brown County State Park (one of three dance locations) next to Buffalo Ridge Campground. It’s the summer season for the Bucks & Does Square Dance Club and everything must be right. On one end of the hall veteran caller George Wiseman sets up his sound system.

Brown County has had dance clubs since the original “Weed Patch Boys” tore it up in the early 20th century. The Bucks & Does have been meeting in Nashville since 1970 and are the largest club in Indiana. There are 75 current members. “There is one charter member still living,” Romelle says. “He’s 97 and sharp as a tack, still drives, and still dances once in awhile.”

Ed and Romelle started square dancing when Ed was in the Service and they continued through his college years. “In 1957–59 we danced up at Purdue University, which had a square dance club called Folk-a-Whirlers,” Ed remembers.
They stopped dancing to raise their family but always dreamed of taking it up again one day. After retiring in 1994 and buying a home on Lake Lemon they quickly answered an ad in the Brown County Democrat calling for square dancers. The rest, as they say, is history.

Dancing is a good way to exercise, says Ed—who is 77 and slim as a young man—while enthusing about the activity that has kept him feeling young. At Purdue they’d learned the old-style dance. “We called it the hoedown, which was the covered wagon style of square dancing. At night they would circle the wagons, gather around the campfire, and dance.”

Today’s dance is the more complicated “Western square dance.” Established by educator Lloyd “Pappy” Shaw, whose research preserved much of America’s folk dance, Western dance depends on knowing basic patterns while responding to verbal sequences given by the caller. There is a great deal of spontaneity to the action and much of the enjoyment derives from the unique way each dance evolves.
Square dancing almost died out in the early 20th century when Henry Ford, whose wife was an avid dancer, encountered caller Benjamin Lovett at the Wayside Inn in Massachusetts. Ford liked the caller’s patois so much that he offered Lovett a job in Detroit. When Lovett responded that he was under contract Ford pulled out his checkbook and bought the entire establishment. Ford built a dance hall, sponsored radio broadcasts, published a book, and pioneered teaching of square dancing in schools throughout the country. His interest, along with Pappy Shaw’s extensive research, inspired square dancing’s revival. 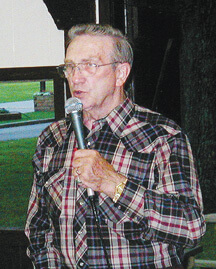 George Wiseman has been driving down from Noblesville for 25 years to teach and call dances for the Bucks & Does. “My brother and I played in square dances about 1948 on Saturday nights,” he remembers, “the old hoedown night. They paid us by passing the hat—seven musicians divided four dollars and fifty cents.” Wiseman was one of those who benefited from Henry Ford’s interest in the pastime. “I enjoyed square dancing because we had a music teacher who taught it after school,” he says. Like the Schoff’s Wiseman stopped dancing until one day, “My wife came home and wanted to take square dance lessons. Two years later she talked me into calling dances—forty years ago.”

“We have a state convention every year in Muncie,” says Romelle about the Indiana Dancers Association, which has 2000 members statewide. Next year’s national convention is in Louisville.”

“In the National,” Ed remarks, “somebody’s dancing all the time from ten in the morning until eleven at night. Ballroom dancing, round dancing, folk dancing, line dancing, square dancing, contra.”

Worldwide the American style of square dancing is booming with clubs in Japan, Taiwan, the Philippians, Germany, Australia, and many other locales. “No matter what country you go to it’s always called in English,” says Romelle. “We have friends all over the world.”

For older people dancing is an opportunity to get out, have a little fun, and be involved. “It’s good physical exercise as well as good mental exercise.” she says. “You have to be thinking all the time. It’s a fun way to stay active and do your exercise.”
But younger people, often to their surprise, find they enjoy it too. “Sometimes the cross-country teams will come out here to use the Park for conditioning,” says Romelle, “and they’ll discover our dance. We’ll have a whole roomful of girls and guys. They probably don’t go home and tell their friends they square danced,” she laughs. “It’s not the cool thing to do.”

“You’re here to have fun,” George Wiseman adds. “That’s the main part of it.”
For more information about the Brown County Bucks & Does call the Brown County Historical Society at (812) 988-2899 or Ed and Romelle Schoff at (812) 988-2338. Dance classes start the first Tuesday of October from 7:00–9:00 p.m., and every Tuesday thereafter through April at the Historical Society Building at 1934 State Road 135 North. The first two lessons are free and $4 a person afterwards. Dances are generally held the first and third Friday of the month but there are clubs throughout the state. You can usually find an event happening every weekend. Participation fee is $4 but watching is free and fun, too.