Most twelve-year-olds run to the playground when the recess bell rings. Brown County artist Rosey Bolte stayed indoors and drew murals of horses and pioneer scenes on the chalkboard.

Rosey grew up on a farm in Tipton County, Indiana. She is the youngest of four and comes from a family of artists. “Mom always encouraged all of us to do our art,” she says. She shares a common bond with her two older sisters, sculptors Patti Beck and Rita Jackson. All three are successful artists and garden experts. Her brother Ken is a horticulturist.

“Growing up we always made our Christmas gifts,” Rosey recalls. “We not only gave to each other, we made homemade gifts for nieces and nephews.” A self-taught artist, Rosey credits her mother for her love of art, and thanks her dad for the introduction to gourd painting. After graduation, Rosey married and moved to Brown County. She settled down in a rustic cedar home outside Nashville. “One day my dad stopped by and handed me a gourd,” she laughs. “He told me to paint something on it.” That was the beginning of her “love affair” with the dried fruit shells.

A housewife and mother of two boys, Rosey continued to paint and sculpt small clay figures. Her miniature country scenes depicted life in the past. In 1988, she won the Christmas Tree Ornament Award from the Indiana State Museum. It wasn’t until the early nineties that she began to combine sculpting with her gourd art. 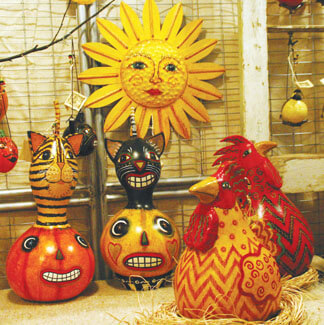 After going through some difficult years, she decided to take some time off from painting. Rosey devoted most of her time volunteering at St. Agnes Church in Nashville and visiting nursing homes. She enjoyed helping others, but realized something was missing. “I have always loved to paint and sculpt, but it took a four and a half year sabbatical to make me realize how much I missed it and need to do it,” she says.
In 2005, her marriage of 28 years ended. Faced with some life decisions, she donated all of her dried gourds to an artist in Kentucky and returned to her childhood home. She moved back to Brown County in 2008 and met her current husband through mutual friends at church. It was love at first sight. In March of last year, her mother passed away. Five months later, her father died at age ninety. In the last several years, Rosey has faced happiness and heartache, but a desire to paint inspires her to produce vivid and intricate works of art.

“It feels good to be back in the art world,” Rosey says. Her schedule is full and she is very involved with the Brown County art community. She is a member of the Art Alliance of Brown County and her studio was on the “Back Roads of Brown County” driving tour in October. She participated in the mural behind The Ordinary restaurant, and painted a banner for the streets of Nashville depicting a Brown County night scene of a log cabin and horses. In November, she painted a Brown County scene for the “Art in the Round Ornament Exhibit” in Nashville. 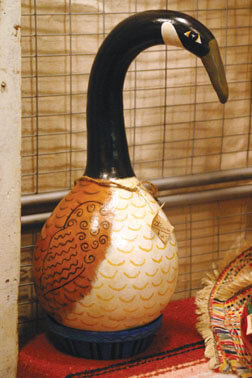 She was recently accepted into the Indiana Artisan program (IndianaArtisan.org). Fellow artist friend Judy Prichard encouraged Rosey to submit her application. Launched in 2008, this program showcases the best of Indiana’s food and art in stores and on trails throughout the state. The Brown County area is on the Indiana Artisan Trail. “Getting accepted into this program makes me feel that all the time doing my art has been worth it,” she says. “Life after fifty—this is all very exciting for me.”

Back in her 1930s-styled farmhouse turned into a studio, she is surrounded by gourds. “Each spring I plant new seeds for specific gourds,” Rosey says. She plants both small and large ornamental seeds and will sometimes see 38 mounds of gourds. When she looks out at her garden, she sees potential roosters, birds, and snakes. At the Indiana State Museum art fair this year they chose one of her roosters for their publicity materials. Because of her love of glass beads, she adds a small string to each creation for an extra “Rosey” touch.

When she is not busy painting her gourds, Rosey loves to feed the birds, garden, and spend time with family and friends. She and her husband Jonathan travel to shows and festivals throughout Indiana and Kentucky. “My problem is knowing when to stop,” she smiles. When asked about her future plans, she says, “To put my studio-The Uncommon Gourd, on the map for people to come and see me and my work.”

Rosey can be reached at <roseyzw@gmail.com> or (812) 597-5708. The studio is open most days, but give her a call before stopping by so she can get the fire and coffee going.