“We live in a county of artists and no one had been taking an artisan’s approach to coffee,” says Nick Schultz, proprietor of Brown County Coffee Company. While one finds brew from an array of locales throughout the world in our area, what particularly interested Schultz was working with the premium beans from particular harvests, delivered fresh. “Basically, raw beans of a specialty grade are a miracle of nature,” he says. That’s only half the equation, though, according to Schultz, who says “anybody can turn a bean brown.” There’s considerable craft in roasting and brewing.

His business is a classic case of someone’s passion for a great product fueling his entrepreneurial momentum. He has operated on the quintessential shoestring model, and in three years has built a business that encompasses supplying restaurants with artisan-roasted coffee, an equipment-installation-and-training-program for restaurants, retail sales, and a crazy-busy farmers’ market stand where he sells the steaming-hot end product. The market booth is the only activity for which he employs staff. Everything else is a one-man operation, with advisory input from his wife, Audrey.
The 1997 Brown County High School graduate’s love of coffee dates back to an 8 o’clock calculus class he took at Indiana University in Bloomington at age 19. He spent some time investigating the offerings at Starbucks, but then, he says, “I started tasting coffees that were far superior to Starbucks or any other national brand. I asked myself, ‘Why are they better?’” 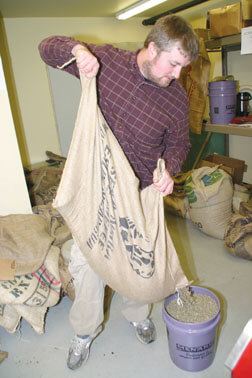 His father-in-law exposed him to a friend who roasted beans at home. The following week, they went in 50/50 on a roaster from SweetMarias.com, a bean, equipment and information resource for home roasters. “Then I contacted the state to find out requirements for getting a wholesale food-manufacturing license,” he recalls. He began his venture in an empty garage facility “on Coffee Hill, believe it or not.” He says that “we proved our concept up there.” After nineteen months at that location, he moved into his present space on the site of his father’s electrical-contracting business on Greasy Creek Road. With his forklift and receiving dock, he can accommodate tractor-trailers that bring him 1,000 pounds of coffee a week.

He also upgraded to a “heavily modified, industrial-grade roasting machine, with souped-up motors, fancy controller,s and more temperature sensors.” Schultz says these give him more real-time “feedback on what’s happening with the coffee.”

The process involved in making his product is conducive to multitasking. “I can box shipments or talk on the phone while I’m roasting,” he notes.

“Neither my wife nor I are great marketing people,” he says. The way he began to get the word out about his coffee was to show up at the back doors of area restaurants, and ask whoever he spoke with to pass along his card and a bag of coffee to the chef. Restaurant Tallent in Bloomington was the first to sign on, and others quickly followed. “Patrons would ask servers, ‘Where did you get this coffee?’ which was how we started our forays into the retail market,” he explains. That kind of interest helped him address the fact that shoppers are habit-driven. “I had to overcome consumer inertia,” he says.

He purchased a competitor, Bloomington Coffee Roasters. “That got us into our now-infamous Bloomington Community Farmers’ Market spot,” he recalls. Regarding the volume of business he does there, he says, “It’s like a rock concert. It’s insane. People have told me, ‘I’ve seen you at the market, but I couldn’t get to your tent.’” He is assisted by five people at his booth. 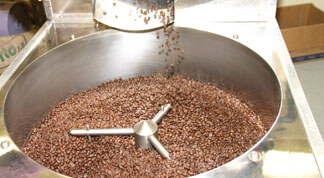 Lately Schultz has expanded into commercial brewing equipment sales, installation, service, and training. This in turn has opened up a market for private label product development, with customers buying their beans from Brown County Coffee.

The difference between the bean buyers that most distributors work with and the ones that supply artisan roasters is a sense of partnership with growers, according to Schultz. “Those buyers get very involved in specifying to growers what they want in a bean, but the growers’ reward is better money for their yield,” he explains.

He likens his approach to that taken by this area’s painters and craftspeople. “To get the kind of complexity, balance, carmelized sweetness, and spicy tones I’m looking for in a dark roast, for instance, takes hours of practice and study,” he says. “That’s why I think this business is perfect for Brown County.”

Brown County Coffee and Bloomington Coffee Roasters coffee can be found in many area restaurants. The website <www.BrownCountyCoffee. com> provides more information. Nick and Audrey can be reached at
(812) 340-2505, or <browncountycoffee@sbcglobal.net>.