It’s been ten years since Brown County built its new library. The elegant wood and stone structure was lovingly constructed for a community that cares deeply about tradition as it prepares for the future.

“It still feels new to most of our patrons,” says library director Yvonne Oliger. “They are quite startled to think that we’ve been here ten years.”

Nearby a young boy happily plays with a model train in the small wing of the building dedicated to children’s activities. “We see lots of children running in,” she says. “They’re so excited to come to their ‘grandparent’s library.’ That’s what they call it.
“There are subtleties about the way the building was designed,” she adds. “When you move to the other end of the library it’s extremely quiet. There’s that hushed sound of paper and pages turning, and newspapers rattling.”

“It’s interesting how many people from out of town know about and like our library,” says David Martin, who owns The Toy Chest in Nashville. A modest man who downplays his own role, Martin was instrumental in getting the library built. “It has done what we hoped it would do—been a magnet for the community. We’ve created a building that people like in a setting that people like, that is accessible.” 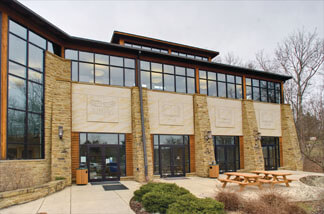 “Libraries add value to the health of the community,” adds Oliger. “More than two-thirds of our county has active library cards. That’s how important the library is. My best hope is that that we can help keep our young people in Brown County. That they will have affordable housing and good jobs and can support their families. That the library will stand as a partner with them. I think as the county grows, especially in the area of technology, we will make it easier for people to live and work here.”

The most important element—beyond wood, stone, or resources—is community: the patrons, volunteers, and staff. “We could have an ugly building,” says David confidently, “and with our staff we would have usage.”

“My job is to put everything in place to help the staff serve the patrons well,” Yvonne adds. “It’s all designed for our patrons to enjoy their library experience. That’s what it’s about. We have enormous respect for the staff.” 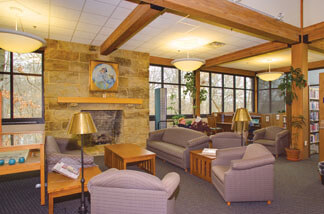 Even so, nothing much could happen without the help of the library’s many volunteers who have helped keep the building running smoothly through tough economic times. “We have a wonderful Friends of the Library group,” Yvonne says, “Friends gifts to us improve the library’s service. 99% of the material sitting on the shelves has been processed by volunteers,” she adds. “Volunteers keep the Cordry-Sweetwater branch open twenty hours a week.”

This ability to make do with less is a hallmark of the Brown County Public Library, which has managed to give first class service in a beautiful facility during the recent property tax imbroglio. “We’ve been careful,” Yvonne says. “We’re not in debt although we operated for two years essentially without money. During those really dark days we were the recipient of several gifts that enhanced what we received from the taxpayers. We are very appreciative to the county council who, all these years, have helped us. They have been very supportive and understanding.”

When the library could not afford new computers a patron who worked for the Chicago school system convinced them to donate some to Brown County. “We’re lucky that way,” Yvonne says. “They donated two more generations of computers to keep us moving. People need the library to conduct the ordinary business of their lives. There are so many things you have to do online—whether to apply for a job, develop a resume, or file for unemployment.”

“If there is a need the library tries to fill it,” David adds. “It makes people want to participate. It’s more than just books or a computer.”

“Where else is there as much public art?” Yvonne asks. The library has displays of everything from a complete collection of Brown County pottery to the work of Will Vawter, Patty Bartels, William Zimmerman, Jack Brubaker, Frank Hohenberger, and many others.

Thanks to a gift from Onya LaTour—who left money to the county to provide space for art, dance, and other activities—the library is able to provide much needed meeting space. “People who knew her often say that this is what she would have wanted,” says Martin.

“We have all sorts of programming in there to benefit the community,” Yvonne agrees, “arts, music, dance, and informational meetings—every subject from sewers to forests to women’s health. The thing about libraries is that we’re not asking everyone to have the same opinion but we are asking people to have respect for diversity of opinion. That’s what we hope.”

“We’re hoping that people say, ‘Well done!’ with their money, their time, and their talent,” Yvonne concludes. “That’s why we’re here.”