Skip to content
Calzone Jones and the New CD

Calzone Jones
and the New CD

The roast beef and red onion calzone is not the only special at the Calzone Jones restaurant. A large chalkboard behind the counter at the Nashville eatery reads “Frank’s CD—$13,” in between the lists of the soups and desserts of the day.

Frank Jones may be a calzone guy by day, but music is his passion. He recalls how his uncle taught he and his brother to play the guitar in their Nashville home when Frank was ten or eleven years old. He hasn’t put the instrument down since.

Frank’s dad, Chelsea Jones, bought one acre of land in Nashville for $100, and most of the family has been in the Brown County town ever since.

After a stint in the military, Frank went to IU for a year, then spent one year at Northwood Institute at West Baden studying culinary arts. After that he moved to California where he worked at a wintery’s restaurant and went to a broadcasting school. Most importantly, though, he met his wife. “And I drug her back here kicking and screaming,” Franks says with a big laugh coming out from under his mustache and tan driving cap.

Once they were back in Indiana, Frank worked tearing down barns for a couple years, and continued to work assorted jobs in food service. He wanted a steadier paycheck, though, so he became a block mason. It was hard work, and eventually the injuries caught up to him.

He knew he could return to food service, but he wanted to do so on his own terms. “I worked with some great people before, but there’s nothing like being your own boss,” says Frank.

The Jones started their family restaurant foray under the name “Marie’s Deli.” Wednesdays at the deli were “calzone days,” and Frank loved the big crowds that came for his Italian creations. He decided it was time to make his best selling food item every day, and Calzone Jones was born. 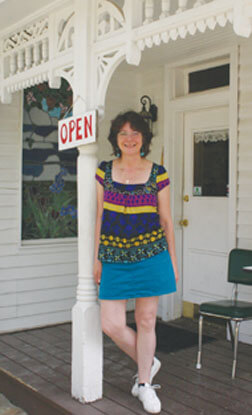 Kim Jones on the porch of Calzone Jones restaurant. photo by Cindy Steele

“It’s a really unique food item that I thought would have good appeal,” he says about the folded dough stuffed with various meats, sauces, and cheeses. He and his wife sell them, as well as sandwiches and salads, at a white house on Jefferson Street, near where Frank grew up.

But all through Frank’s career changes, the one constant in his life has been his guitar; “It’s the best therapy I have.”

Recently Frank was persuaded to record his therapy sessions.

His friend, Doug Harden, had the right microphones and processors, and Frank brought the right music. So, along with some more friends, they all made a CD. “Moonlight Eye” was the result of “15 months of work and fun,” says Frank.

Frank’s brother, Dicky Jones, wrote one of the songs, as did another friend, Bill Wilson. Jeff Foster is Frank’s musical accomplice and a big contributor to “Moonlight Eye.” The two often perform as a duo called Foster Jones. “Jeff is my musical resource,” says Frank. “He knows everything under the sun about theory and how to structure songs.”

The music on the CD is mostly Frank and his acoustic guitar, with other instruments and background singers for good measure. “I used a glockenspiel, anything I can get my hands on to make noise,” admits Frank. For one song, “Sailor,” he rubbed two pizza screens together to create a unique background beat.

Frank enjoyed the record-making process so much he plans on making at least four or five more. “Between my writing and my brother Dicky’s, there’s another 30 or 40 songs that we have in the can,” he says. “There’s a lot in there that can come out. I need to purge myself, I don’t want to leave a scar,” he adds with a laugh.

Frank describes his musical style as “hick hop,” to which his wife, Kim, replies that’s not really true. “God bless her. She’s my best PR person,” Frank says about Kim, who he describes as a wonderful partner.

But when pressed, Frank struggles to put a traditional label on his tunes, although he says he loves to listen to James Taylor and Tommy Bolin.

Frank’s manager has sent one of his songs to Willie Nelson, hoping the famous singer will buy it and make it famous. But Frank says he’d be happy if anyone bought one of his songs. “To know that it’s a viable product is enough for me.”

Frank hopes others enjoy listening to his music as much as he enjoys making it. “I don’t plan on running a restaurant the rest of my life,” he says. “I’m getting too old for that. I definitely want to have some irons on the fire.”

“Moonlight Eye” is just iron No. 1 on Frank’s fire for music.

The Jones are having a CD party at the Brown County Inn on August 1. Doors open at 5 p.m. and the show begins at 6. There will be a cash bar and a buffet from 5 to 7 p.m. Tickets are $5 plus a nonperishable food item for Mother’s Cupboard. The goal is to fill a truck load of food. “Change the world. Start at Home.”