Skip to content
Heartbreak Hotel and Man in Black

Heartbreak Hotel
and the Man in Black

Robert Shaw and the RedBarn Jamboree

The RedBarn Jamboree has been home to music for many years. Who can forget when Sheila Stephen sang there, or the long reigns of Lloyd Wood and Bruce Borders? Now, with Robert Shaw and his Lonely Street Band bringing their tributes to Elvis Presley and Johnny Cash to the stage, the RedBarn is rocking again.

Shaw was performing in Chicago when he heard of the Little Opry’s destruction. “I grew up in southeastern Indiana and had a grandmother who lived in Bloomington,” he says remembering his disbelief. “I’d driven by it a thousand times.

“I got this wacky idea to open an act in Brown County,” he smiles. “I made an exploratory trip to Nashville and from the very get-go everyone was welcoming. We knew it was right so we started checking out venues. The RedBarn Jamboree—although it needed a lot of TLC—was available.”

The problem was that the RedBarn had fallen into disrepair. So Shaw and his crew rolled up their sleeves and got to work. “There was so much to do. You crossed one thing off the list and three more popped up,” he says. “We replaced the ceilings and walls, recovered the stage, installed lighting and sound. We used five coats of paint! It was a labor of love, far more involved and time consuming than we’d planned. We’ve been blessed because we met a lot of folks in town and had all the help we needed.” 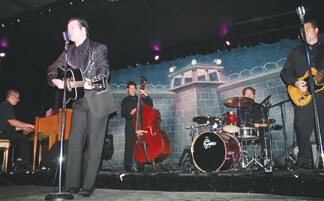 Robert wants to help fill the void left by the Opry’s burning. “It’s a slightly different venture than what the Opry did but the spirit is the same,” he says. “With Elvis and Johnny Cash we’re going for the same audience. We just need to get people reacquainted with coming out to the RedBarn for music.”

Shaw began singing at church early in life. “I loved gospel music,” he says, “It was natural for me. In junior high I played trumpet and that evolved into theater. I love performing, the feeling you get when you know someone is being entertained, the exchange of energy between a performer and his audience. It’s the neatest thing in the world.”

At college Shaw studied musical theater. “It’s sort of what spawned the Elvis thing,” he admits. “When there was a show that required an ‘Elvisy’ kind of character—the dark-haired singer or crooner—that always meant me because I had dark hair and could carry a tune.”

Based in Arizona, Robert spent ten years sharpening his Elvis act, finally ending up in Chicago with Million Dollar Quartet, which is a musical based on an event in 1956 when Elvis, Johnny Cash, Jerry Lee Lewis, and Carl Perkins gathered at Sun Records for an informal jam session. “Somebody had the good sense to make a musical out of that,” Robert laughs. Million Dollar Quartet has since moved to Broadway with great success.

The RedBarn production focuses on the young, rocking Elvis, from 1954 to 1961, just after he returned from the army—songs like “That’s All Right Mama,” ”Don’t Be Cruel,” “Hound Dog,” “Jailhouse Rock,” “Love Me Tender”. While the show focuses on the Elvis persona, the performance focuses on Presley’s music. The band is very tight, having great fun giving the music the sharp rockabilly crack it needs to fully come alive while still allowing the ballads room to breathe.

Shaw’s Johnny Cash Show is a more recent production. “When the movie Walk the Line came out several years ago I was a huge fan,” he remembers. “It reawakened my passion for Johnny Cash’s music and life. When the interest in that movie was at its peak, people began asking me, ‘Why don’t you do a Johnny Cash show?’ We went back and forth as to how to keep it fresh. We got new costumes, new set, new songs, and added ‘June Carter’ (the redoubtable Sarah Flint) to help sing duets.

Songs include classics like “Folsom Prison Blues,” “I Walk the Line” “Man in Black,” “A Boy Named Sue,” “Jackson,” and, of course, “Ring of Fire.”

“I don’t know what happened over the last year but it’s kicked up a notch. We’ve been selling out wherever we go. There is a lot of interest in Cash’s music with younger people right now.”

Heartbreak Hotel and Man in Black are fun for the entire family as Robert and his Lonely Street Band recreate two of the greatest legends of American popular music. “We want to encourage people to come out and give us a try,” he says. “Our goal is to make the show affordable and family friendly. We want people to take a chance and come see us. I think they’ll be impressed with what we’ve put together. We look forward to being a fixture here.”

Showtimes at the RedBarn through November are: Friday 8 p.m. and Saturday 5 p.m. for the Elvis tribute Heartbreak Hotel. The Johnny Cash tribute Man In Black is slated for 8 p.m. Saturdays. Tickets are available at: 1-888-71-TICKETS; online at <http://lonelystreet.showclix.com/>; in person at the Brown County Convention and Visitors Bureau; or at The RedBarn Jamboree the day of the show. Prices range from $10–$18. The RedBarn Jamboree is one mile east of Nashville on SR 46.