The second year for Coachlight Musical Theatre under the guidance of Golden Ticket Productions is characterized by building on what was proven to work, as well as some new programs and projects. The principals in Golden Ticket are fully immersed in Brown County life now, and feel like they know what to contribute to the community. As the company’s Brad Zumwalt puts it, “We’re huge fans of Nashville.”

“The shows are being revamped this year,” says Zumwalt. For instance, last year’s show featuring the music of Patsy Cline is now called “Cowboy Sweethearts,” and will also feature the music of Brenda Lee and Loretta Lynn.

Two shows currently in development are “Brown County Bandstand,” which will have a format like that of the long-running television show hosted by Dick Clark, and a show modeled on those presented by the “Rat Pack,” which consisted of Frank Sinatra, Dean Martin, Sammy Davis Jr. and Joey Bishop, in Las Vegas in the 1960s. “That one couldn’t be further from ‘Cowboy Sweethearts,’ says Golden Ticket’s Julie Powers, referring to the broad array of shows Coachlight is offering.

The Golden Ticket team discovered over the course of the last year that it could draw from the pool of theatrical talent in central Indiana for most of its cast. There is one company of actors that is in all the shows. Powers says an advantage of having one small company is that it becomes tight-knit. “You can know that a fellow actor is trying something new in a scene, but if everyone knows each other really well, the audiences never sees that,” she observes.

The Theatre’s ticketing system is now online. People can look at seating charts for particular shows that interest them, and click on available seats to reserve them.
Coachlight is offering several community-outreach programs this year. On March 9, it will host a Vixen Dance class, taught by a pole-dance fitness instructor. Also in the works is a series of one-day acting workshops. “The workshops’ focus will be teaching people how to audition for plays,” says Powers. “That’s something that not even university theater departments cover in much detail.” 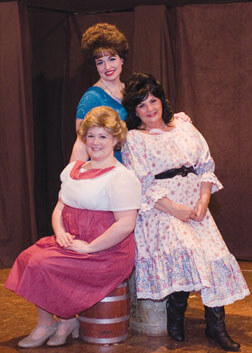 The program that really has Powers, Zumwalt, and their partner Russell Moss excited is a week-long musical theater camp, the exact July dates for which will be announced soon. Kevin Butler, and Indiana University instructor and nationally renowned show-choir judge, will lead the camp. The culmination of the week will involve performances by participants. In addition, part of their tuition goes toward seeing two Coachlight shows during that time. To market the camp, Golden Ticket is sending brochures to area high school music and theater department faculties.

Marketing in general is an area about which the principals are learning a great deal. Coachlight Theatre now has a Facebook page and is doing some print advertising. “It’s different from the way many Nashville businesses spread their message,” says Powers. “With entertainment, you’re selling an experience, not an object.” Cross-promotion, such as comped tickets for local merchants, is also part of Coachlight’s marketing strategy.

The three are also participating in monthly “entertainment summits,” meetings among those in the community who are in that general field. “We’re looking at what each of us can bring to the table,” says Zumwalt. Russell adds that those involved want to “increase awareness that there is nightlife in Brown County.”

Coachlight’s sister theater, the Boggstown Cabaret, is going strong in its twenty-sixth year. The Boggstown cast will be coming to Nashville a few times this season for “Cabaret Night.” Still, Golden Ticket wants the two companies’ identities to be distinct. “Doing something different here is our biggest motivation,” says Zumwalt.

As in many small theater companies, everyone plays to their strengths. Russell handles lighting and sound. Powers is the go-to person for costume ideas. One of the theater’s former owners, Sue Christenberry, helps with set design and construction. “She’s amazing,” says Powers. “We wanted to alter the ‘Tumbleweeds’ set, and she instantly had some great ideas.”

The theater’s biggest challenge is establishing a new identity. “We want the public to know that the shows are new,” says Russell. “They’re also widely varied. If one is not your preference, another one will be.”

Overall, though, the Coachlight team feels like it’s building on a solid first year and is fired up about its role in Nashville’s arts scene. As Zumwalt puts it, “We’re not going anywhere.”