John Elmore has done every job imaginable, from railroad conductor to country western music festival director to door-to-door encyclopedia salesman. But at the age of 77, he has come full circle as an artist.

“I’ve always pursued my art in some way or form,” he says. John started drawing cartoons in the basement of his Bloomington house at 9-years-old. As part of the Bloomington High School class of 1951 he found inspiration from an encouraging art teacher. But other than high school classes and one college class, he is a self-taught portrait artist.

His work is nationally recognized as some of the best Native American portraiture in the country. John uses Italian pencils called Berols to create drawings so detailed he has had people ask if they were actually photographs.

“If I see an interesting face, my wife will tell you, I go over and take a picture,” John says. “Wherever I go, I observe.” 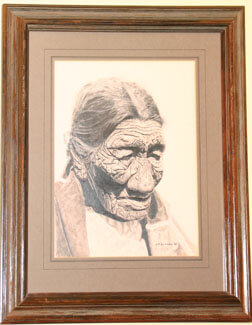 That eye for detail led to a partnership with Chateau Thomas Winery and a new gallery at the winery’s Nashville location. Thirty-four of John’s drawings hang from the upstairs walls of Chateau Thomas. John painted the walls too, as he is also a semi-retired house and commercial paint contractor. “If this art don’t work, I’m still going to have to paint houses,” he jokes.

The idea for displaying his work at Chateau Thomas Winery started two years ago when John hung 14 of his Native American portraits on an empty wall downstairs Elmore now has a full gallery of his work upstairs.

John’s work is inspired by his heritage and by his many years living in the southwest in Texas and New Mexico. He is one-eighth Native American, with ancestors from the Potawatomi, Wea, and Miami tribes. He says Native American faces are fun to draw because they tend to have more wrinkles and details than other faces.

John came to Brown County after many years and many different careers in the Southwest. “As you get older, you go back to your roots,” he says. “It was my dream to live in Brown County.”

John went into the Air Force straight out of high school before moving to Florida to work at a sign shop for his dad. During a trip to California for a sign job, his car broke down in El Paso, Texas. He stayed there for twenty years.

While there, John worked for Southern Pacific Railroad, eventually becoming a conductor. On the side he sold insurance and real estate, and later worked as a salesman for Singer Sewing Machines. He kept up his drawing, though, and a friend with connections to Burbank got him a job with Walt Disney. John was one of 162 cartoonists to work on the film “Cinderella.”

John spent a few years turning a ghost town in New Mexico into a popular location for country music festivals. He has also worked for Radio Shack, had a short stint as a manager in the country music business in Nashville, Tennessee and was even a funeral director in Gosport at one point. He calls himself “a glutton for punishment,” and his determined work ethic crosses over into his art, too. An average drawing takes him 40 hours to complete. “We just like to do different things,” he says.

He and his wife, Jane, still travel to the Southwest in their 38.5-foot motor home for pow-wows every year, which gives John plenty of chances to take photos for future portraits.

John doesn’t smoke, eats no sweets besides a piece of dark chocolate at Christmas, and follows a strict exercise regimen. “I do 110 push-ups as soon as I wake up, and between 4,500 and 10,000 curls before I go to bed,” he says, and that’s on top of long brisk walks during the day, often at Brown County State Park a few miles from his home.

“Brown County’s an interesting place to live,” he notes. “You’ve got artists, leatherworkers, all these different talents here.”

When he’s not traveling, drawing, exercising or working on his new studio next to his garage, John collects arrowheads and Southwestern décor. He says he plans to be around for a long time, making art and living life.

John also makes it his maxim to surround himself with good people, one of which is his wife. “I couldn’t make it without her,” John says of Jane, who is also his bookkeeper. “She’s my right hand.”

“I don’t let anything get me down,” he says. “I’m an optimist.” With that attitude, John will be drawing faces for a long time to come.