Skip to content
Mike Kelley and the House at Stonehead 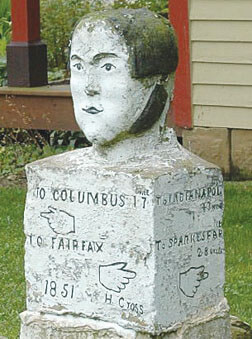 Mike Kelley and the
House at Stone Head

When people talk of a “moon walk” it brings up images of astronauts bouncing around the lunar surface, but to some residents of Brown County it literally means venturing outside during the full moon and hiking somewhere, no matter the weather. “I’ve been to 38 of them straight,” says Mike Kelley, who started the Moonwalks in 2007. “We have a pitch-in and hike—it’s a social thing.”

Once a member of the group meets the “moonwalker challenge,” which is to hike every full moon of the year, “We have a little ceremony with Elvis, and play You’ll Never Walk Alone,” he laughs. “It’s fun and part of the Brown County spirit.”

In 1992, when Kelley first bought property in Brown County, he fulfilled a dream he’d harbored since he was eight years old. “I bought forty acres and camped there for seven years before I built my house,” he remembers.

Although growing up on the north side of Indianapolis, “I spent time on a farm and have good memories of that,” he says. “I’ve always been interested in nature. If I see a tree I want to know what kind of tree it is, if I see a flower I want to know the name of it—if you know the name of something you appreciate it more. People like to read novels, I like to read field guides.”

He had also been intrigued by the old Stone Head—the iconic Brown County mile marker created in 1851 by Henry Cross to fulfill his commitment towards road improvement. So when the house behind the Stone Head became available Kelley bought it. “I didn’t know what I was going to do with it,” he admits. “It looked like it was falling into disrepair. The previous owner logged south of the creek in order to afford to fix the place up but just ran out of money. She came back to see the house one time and actually got tears in her eyes. She told me, ‘You’re doing what I dreamed of being able to do.’”

Kelley lovingly restored the farmhouse, which he rents as a tourist home. Each room has a theme, including the “Blue Moon Room,” “The Nest,” and a personal favorite, the “Elvis Room.” “Elvis wanted to sleep here,” he says, deadpan.

“Personally, I’m more interested in talking about the future of Stone Head,” he says. “This place sits in the middle of a great big beautiful valley, the middle fork of Salt Creek, starting in Bartholomew County and widening as it gets down to Story.” 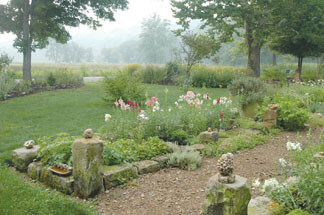 Inspired, Kelley began turning his property into a nature preserve. “I decided to put in a wetland area and hiking trails,” he says. With the help of the Indiana DNR and the Army Corps of Engineers, “We’re enhancing what’s already there, planting native prairie grass and wildflowers for birds, amphibians, reptiles, mammals. Improving the environment for creatures like that improves it for all of us.”

In his wildest dreams he would like to see the entire valley become a green belt. “Bill and Becky Freeman up the valley have 350 acres they’re planting in native prairie grasses,” he says. “It would be nice if people could convert some of the abandoned farmland into a nature preserve. It would be unique to have something on that grand of a scale that would attract the kind of tourists who enjoy the environment, people who respect the land.”

He admits that some folks have expressed the skepticism that greets a dreamer but this has not deterred him. “A lot of farmers are struggling,” he points out. “It’s good farmland but you have constant flooding. If we could convert a part of this to wetland it would create something that people would be proud of and enjoy.” 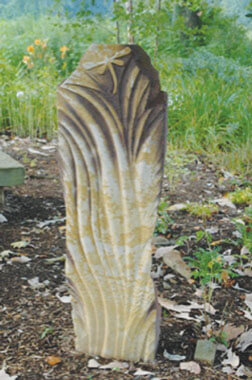 When winter arrives and he can see the lay of the land Kelley designs trails across his property and along the creek. He’s asked local artists like Jim Connor, David Smith, and Rob Rogers to design sculptures and cairns. “I love it when I see someone has stopped to walk in the garden or out on the trails,” he says, while cautioning visitors to respect the privacy of guests at the house. “I want people to enjoy it.”

Kelley remembers meeting artist Susan Showalter when he first moved to Brown County. She asked him, “Are you a painter?”

“I said no, no, I’m not a painter, and kind of laughed,” he remembers. She then asked, “Are you a writer?” “And I said no, and started feeling uncomfortable, so I looked at her and said, ‘I’m a dreamer, like you.’

“I’m an orthodontist,” he smiles. “All day long I’m confined to a small environment—the inside of someone’s mouth. But out here I have the opportunity to create something on a grander scale. You talk about oil painters and their palettes but my palette is that big field out there. It’s a different sort of artwork.

Visit the Stone Head where SR 135 meets Bellsville Pike, between Pikes Peak and Story. For a history of the house and of the Stone Head, or to reserve the house, see
<www.houseatstonehead.com>.