Below are edited excerpts from a conversation I had with local instrument builder and repairman, Bruce Taggart. My aim is to allow readers to hear Bruce explain his craft and his life in his own word. I was struck by his thoughtful observations about his craft as well as his passionate dedication to his work.
—Jon Kay

I’m Bruce Taggart, and I’m a mandolin builder, and a fiddle builder, and a banjo neck maker, and an instrument repairman. I started as a musician interested in banjo but couldn’t afford a real fancy instrument, so I built one. 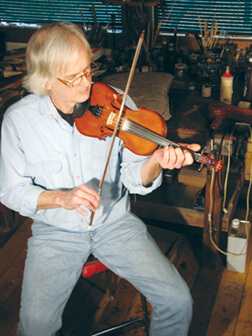 I found a pot (the rim) and built the neck. The Earl Scruggs book How to Play Bluegrass Banjo in the back section says how to build your own banjo. So that was what I used to get started. I didn’t have any tools, except a few hand tools that I inherited from an uncle. I had to draw a pattern and farm out the bandsaw work. When the parts came back they had put the template in the wrong spot and cut the fifth-string groove at the seventh fret instead of the fifth fret. So they were flawed, but I patched them together and made necks. And that was my first foray into the musical instrument building world.

Then I came across a couple old violins, which were both broken and needed work. I took one to Ole Dahl in Bloomington, who was the only fiddle repairman in the area. His daughter went to school at Brown County so I knew her and that was my connection to him. He looked at it and thought it was worth repairing and did some minor repair. I could tell what he had done, and I thought, “Well, that looks easy, I’ll try my hand on this second.” So I started developing an interest in violins—fiddles. I started looking for them at yard sales and auctions and gradually acquired a few that needed work. I learned to repair them, basically, through reading and an occasional conversation with another person that was in the business. That evolved into my fiddle building, which is what I’m doing right at the moment. It’s a labor of love.

In a former lifetime bluegrass music was a big part of my life. I played bluegrass banjo, or tried to, and built the banjo necks. The thought of building a mandolin came to mind. I ordered some wood but knew nothing about what I was doing. I took my violin building techniques and applied them to the mandolin form. By the time I was done I had a mandolin. And I was pretty proud of it. I showed it to a local mandolin player, Kevin Cox. He played with it and, oh boy, he lit up and thought it was great, which made me feel really good. But about a month later the neck popped out of it. The dovetail was only a quarter-inch deep and there was no way it was going to stick. So I just trashed it.

About that time, Siminoff came out with an instruction book, How to Build the Bluegrass Mandolin. It was a real eye opener to me. So I built a series of mandolins with that book in hand. Then a man from Martinsville showed up one day with a mandolin case. He opened it up and there was a 1921 Lloyd Loar Gibson Mandolin. The instrument was old and worn…but it was beautiful. This man was Julian Cramer from Martinsville. He and I struck up a friendship after that and he let me look at his mandolin and measure it—inside and out. So here I take this Lloyd Loar Gibson, and study it, and develop my own style from it. Today, I guess I’m beyond making copies, because I’ve made 99 mandolins. I’m pretty much doing my own thing.

After many years of building mandolins it just made sense to try to build a fiddle. In the early Eighties I built three, but I didn’t enjoy my production approach. So I put that down and didn’t do that for a few more years. Then in Ninety-five, I was doing some remodeling in my cabin and commissioned a local weaver, Sarah Noggle, to weave a huge rug for my living room in trade for a fiddle that I would build for her. So I picked some nice Brown County wood, some silver maple and some sitka spruce from Alaska, found my old patterns from 1983, and built a fiddle. It was fun. And I played it a little bit and it sounded pretty nice. I went ahead and traded. And I thought, “I’ve got to build another one for myself.” I carved it out. It was pretty nice but there were a few things that weren’t quite right so I decided to build another one, and I’ve continued building them.

I’ve had experts give me little pointers here and there. One of my colleagues, a gentleman in Arizona, we talk on the telephone every once in a while. He was telling me about this fiddle maker he knew that did everything with a knife. No gouges. Maybe he used finger planes but it was a real minimalist approach as far as tools go. And it’s simple tools. So I thought, “that sounds good.” I learned that the simpler the tool, the more skill required by the operator. You can see the quality of workmanship. You don’t want to obscure that. You don’t want it to be sloppy, or that may be a reflection on the maker or something. So, that’s the fiddle for me—building them!

Mandolins I build three at a time because I get into this flow. It’s a production. Fiddles, it’s one at a time. With the mandolins I make good use of my time and make a nice instrument but I don’t feel that same sense of attachment. Whereas the fiddle, after I’ve carved it with a knife, held it in my lap, done all this real close work I feel more attached. I feel like I know it better and I get into that feeling of imparting a little bit of myself into my work.