Skip to content
Lyn Letsinger-Miller and the Art in Brown Co.

Lyn Letsinger-Miller
and the Art in Brown County

For Lyn Letsinger-Miller, collecting fine art is like a treasure hunt. While her college friends bought prints from stores, she looked for student art at the Ft. Wayne School of Art. “When I bought an original at $100 my friends thought I was crazy spending that much on a painting,” she smiles.

Following her marriage to fellow journalist Leo Miller and the birth of their son, Blair, she accepted a position at IU as a journalism professor. “Being a TV journalist was pretty tough with a five year old,” she adds. “Teaching let me be around at home more.”

While teaching at IU, she started writing for the Brown County Democrat. Her stories focused on the history of the art colony. “Working for the Democrat allowed me to get to know the people here,” she says. Lyn and her husband built a cabin that originally was to be a weekend place. It turned out to be their permanent home.

After making the move to Brown County, she discovered a next door neighbor’s large collection of Brown County art. Both the paintings and the artists sparked an interest in the early art colony. She began making trips to the galleries and met another neighbor, Margaret Colglazier.

Colglazier was the executive director of the Brown County Art Guild. An appraiser and art dealer, she became Lyn’s mentor and together they started Brown County Fine Arts. They appraised collections and sold paintings. “We used to call it our ‘adventures in art’,” Lyn says. “Actually, she was the one who encouraged me to write my book.”

In 1994, Indiana University published The Artists of Brown County. Lyn’s highly acclaimed book is considered the standard on the Brown County art colony. The colony was established just after the turn of the 19th century. From the early 1900s through the 1940s, the hills of Brown County were home to a group of artists who migrated from urban areas of the Midwest. The book details the history of important artists and features full color reproductions of their work. “I wanted a really good story book with really great pictures,” Lyn smiles.

Over the next ten years Lyn continued to be involved in the local arts community. “I remember on those cold winter weekends going to the gallery and just looking around,” she says. In 2005, she joined the Brown County Art Gallery’s board of directors. 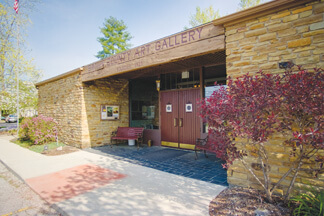 When Lyn joined the board, one of the first things on her agenda was to revive the Collector’s Showcase. Collector’s Showcase is the Gallery Foundation’s biggest fundraiser. It is an opportunity to see works from private collections. Exhibits of T.C. Steele in 2007 and Will Vawter in 2009 drew large crowds from across the country.

The Collector’s Showcase Exhibition and the Mabel Annis Middle and High School Student Art Competition are two of the cultural events that help to promote Brown County’s legacy as a center of fine art. Another is the Indiana Heritage Arts (IHA) Annual Exhibition and Show coming up in June.

In 2005 IHA established a permanent home in a wing of the Brown County Art Gallery and Museum. Its major focus is the annual juried fine art exhibition and sale. In its third decade, the June show is a premier art event. The show attracts entries from numerous renowned Indiana artists. For information on eligibility and deadlines visit <www.indianaheritagearts.org>. The exhibition is open to the public from June 12–26.

The Brown County Art Gallery and Museum houses the work of both current Brown County Association members and early Brown County artists. As president of the gallery, Lyn credits the dedicate staff and board of directors for making it a space to provide the best of Indiana art. Her goal is to provide an affordable art space and foster a legacy of fine art in Brown County.

The gallery also holds several “paired” events throughout the year. Last year, Puppies and Pumpkins was a partnership with the Humane Society. Animals were adopted and artists prepared small, fall scenes and animal paintings. “We continue to find different ways to get people in the door,” Lyn says.

Lyn Letsinger-Miller is an innovative woman who reinvented herself after a successful career in journalism and television. Although her interest in history led her to Brown County artists, her determination to put Brown County Art Gallery on the map makes her a treasure in Nashville, Indiana.

Most days Lyn can be found at the gallery at One Artist Drive in Nashville. Visit her website at <www.browncountyfineart.com> or the gallery’s at
<www.BrownCountyArtGallery.org>.