There’s a new shop in town at 30 East Washington Street in downtown Nashville that’s dedicated to spreading knowledge about mushrooms—how to cultivate, hunt, cook, and care for them—with the Brown County community and beyond.

The Hoosier Mushroom Company is the brainchild of Stephen Russell and Megan Bauer, a young couple team who opened the doors of their business in March 2010 and are committed to becoming one of the top retailers in the region where mushroom enthusiasts can go for the best resources and materials on mushroom hunting, growing, and more.

“Our main focus is not just retail,” said Megan. “We’re just as much about educating the public about fungi, mycology, composting, and the environment. Mushroom hunting is a time-honored tradition not just here in Brown County but in many other parts of the US, Europe, and all over, and it needs to be recognized.”

The pair first got involved in mushrooming as graduate students. Megan became interested in methods of sustainable living and Stephen in bioremediation (the use of fungi to restore chemically damaged environments).

“Environmental, social, and economic sustainability are all very important to The Hoosier Mushroom Co.,” Megan said. “We would like to do as much as we can to lessen our environmental impact, and we encourage others to do the same. Simple acts like composting and recycling can have a large positive impact for our planet over time.”

Mushrooms, the only non-animal food source that contains vitamin D and that can be used for everything from medicinal and culinary purposes to fiber and cloth making to environmental restoration, provided the perfect common ground for the couple’s mutual environmentally conscious interests. 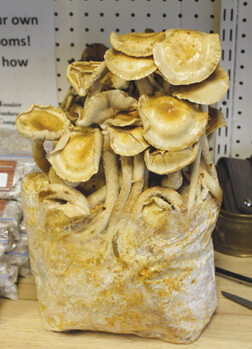 The Namako variety of their Home Harvester.
courtesy photo

Educating people about the versatility of mushrooms is an important part of the Hoosier Mushroom Co. mission. The store carries 25 different mushroom types, all of which are edible, as well as growing kits, carry bags, walking sticks, and resource books. This summer they will offer in-store growing demonstrations every Saturday at 2 p.m., and within the next several months they will begin Indiana’s first and only mycological society, affiliated with North American Mushroom Association.

“There’s a retail store in Tennessee focused more on strictly cultivation, then we know of one retail store out in California that focuses on fresh and dried mushrooms,” Stephen said. “But something we’ve tried to do is culminate the many different aspects of mushrooms, whether it be gourmet foods, mushroom hunting, cultivation, or myco-medicinal benefits.”

Their initial idea was to grow and sell their own mushrooms at farmer’s markets and sell some supplies online, but when they tried to get the necessary growing equipment, many suppliers suggested that they have a store front.

“We sold everything of value we had,” Megan said. “We moved to Morgantown and lived on peanut butter and jelly sandwiches every day and did everything we could to make this happen.”

Now that they have a retail space, Stephen and Megan sell mushroom-related retail items including antiques, gifts, and handmade items. The two are always on the lookout for mushroom memorabilia on their travels, and have brought back mushroom-themed canisters, purses, and tea kettles to sell at Hoosier Mushroom Co.

“We have resources that can be helpful whether it is your first time hunting mushrooms in the woods, or whether you are a professional mycologist,” Stephen said of the resources broad appeal.

“There is a rich history of mushroom hunting in Brown County,” Megan said. “We want to be a part of that history, and offer people a more sustainable way to live and a healthier lifestyle.”