Return to the Wild
Rescuing and Restoring Raptors

by Barney Quick
Photos taken at the facility by Kendall Reeves of Spectrun Studio (812) 333-0536.

One generally thinks of birds of prey as fearless and mighty. The bald eagle, after all, is the national symbol. Even these noble animals can run into trouble leading to injuries, however. That’s when Return to the Wild gets involved.

President and executive director Patti Reynolds and education director Laura Edmunds maintain a facility involving a collection of pens housing an array of visually striking birds. These include great horned owls, bald eagles, red-tailed hawks, peregrine falcons, and more. Most are released to resume life in nature, although some become domesticated to the point that they must remain with the organization and are used in presentations.

In mid-October, the group released two screech owls, two red-tailed hawks, two red-shouldered hawks, and one barred owl. “The more time you put into a bird, the more emotional it is,” says Edmunds. 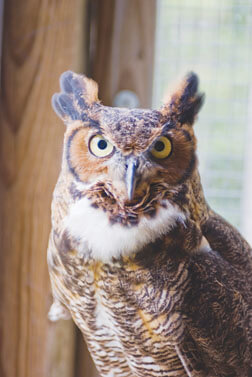 One of the red-shouldered hawks was named Buckshot after the type of injury she experienced. “Her wing was broken in two places,” notes Edmunds. She chuckles when she recounts that “when we gave her a test fly the other day, two pieces of buckshot fell out of her toe.”

Edmunds can elicit responses from various birds with her highly specific calls. When she makes her daily rounds to feed them from her bucket of over bred laboratory rats, her interactions with the inhabitants of the various pens indicate relationships based on their distinct personalities.

Return to the Wild receives calls from property owners, drivers, conservation officers, and others about injured birds at particular locations. Seventy percent of injured raptors are hit by automobiles. Other causes of injury include traps, collisions with buildings, and poisoning. 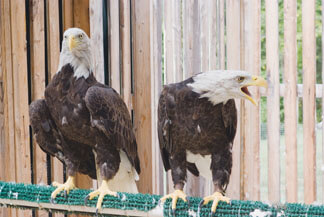 The organization maintains a working relationship with a Franklin, Indiana veterinarian, Jennifer Clarke. Clarke has extensive experience with avian surgery, especially of an orthopedic nature. “We’ve worked with her for some time,” says Reynolds. “She has a reputation among Indiana rehabbers as a ‘go-to’ vet.”

The group only rehabilitates birds of prey, woodpeckers, and adult songbirds. However, it will refer callers for other types of animals to the appropriate providers of immediate care.

Following any medical care the bird needs, Reynolds, Edmunds, and the staff of volunteers pursue a treatment regimen including physical therapy, a nutritional program, and behavioral conditioning, in preparation for release.

The conditioning is based on the principles of falconry, an ancient hunting sport in which a person and a raptor work as partners, Edmunds is a certified master falconer, a status that involves an apprenticeship, testing, and permits from the U.S. Fish and Wildlife Service and the Indiana Department of Natural Resources. “Falconry is a non-consumptive sport,” explains Edmunds. “The bird would be catching the prey anyway.” 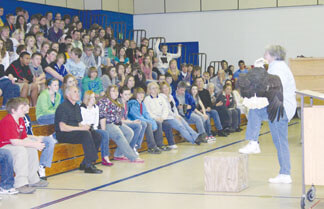 Laura Edmunds speaking to the Brown County Junior High School students about the eagle (the school’s mascot) she brought to an assembly last spring.

Reynolds is particularly excited that the worldwide Nature Conservancy’s Brown County Hills Project, a program focused on the health of the area’s forests, has partnered with Return to the Wild. “We’re now considered a resource for the project,” says Reynolds. The groups jointly issued a survey to area property owners to determine interest in having birds released on certain tracts of land. “The response was overwhelming,” Reynolds reports. “We’ll be looking for sites at which we can release birds that can’t go back to their original site, because of construction, the birds’ status as orphans, or other factors.”

Reynolds worked at Eli Lilly, the Indianapolis-based pharmaceutical firm, for thirty years, first as a research scientist and then in the regulatory area. She began rescuing small birds in the company’s parking garage. “I took them to rehabbers,” she recalls. “One, to whom I’d taken several birds, said, ‘Why don’t I show you how to do this?’” Reynolds founded Return to the Wild in 2001. It has been located in the Nashville area since spring of 2004, when Reynolds retired from Lilly.

Edmunds has a background in nursing, which she left to deepen her involvement with bird rescue. “It got to the point where the patient was about priority number six, behind insurance companies, and various other entities,” she notes. “In the bird-rehabilitation field, you can actually be close to the patient.” She has trained at the University of Minnesota, the St. Louis-based World Bird Sanctuary, and with the National Wildlife Rehabilitation Association.

Some of the birds used in the group’s presentations include bald eagles Ben and Piper, screech owls Rhiannon and Boojie, and a peregrine falcon named Oliver. These are birds that have become too acclimated to human interaction to successfully return to predatory life in a natural setting.

To report an injured bird, make a tax-deductible donation, arrange for a tour of the facility, or book a presentation, call (812) 988-8990, or write to P.O. Box 1153, Nashville, Indiana 47448. For more information as well as photos of the magnificent birds cared for at Return to the Wild, visit