One of the most recognized landmarks of log construction in Brown County is the large museum building that stands at the forefront of the museum complex in Nashville. Constructed of hand-hewn logs, some up to 60 feet long, the massive structure consists of two rooms at either end, a dog-trot through the center, and loft that spans the entire length.

All archival records and local history tell the story of the building’s “discovery” in the early 1930s. James Voland was tramping through the field of a 250 acre farm on Route 58 in Jackson County while rabbit hunting, when he found the construction. Some distance from any house or road, the building had been used as a barn and was showing the ravages of decay and neglect. Recognizing the value of the barn and estimating that it was built “around 1900” (other sources estimate the date to be in the mid 1800s), Voland looked up the title in the Jackson County courthouse, and then purchased it from the Indiana Trust Company in Indianapolis, trustees in a bankruptcy proceeding.

James Voland was helped by Oral Voland in marking the logs in preparation for re-assembly at its current site, lots 33 and 48 in the Barnes Addition in Nashville. Records from the Brown County Historical Society Archives have this entry: “James Voland sold the building, ‘as is where is’ to the Community Club. Scott Mosier ‘handled the deal’ for the Community Club. It is believed by former members of the club that the records of the Community Club in the possession of Mrs. Scott Mosier were destroyed when her house burned. James Voland states that the barn was taken down by Heddy Voland, father of Oral Voland. The rusted metal roof was removed. He thinks that Louis West hauled the logs to Nashville. Oral Voland thinks that Everett Tracy hauled some of them and recalls that it was necessary to run the long timbers up alongside the truck cab in order to transport them.”

Reconstruction of the old barn in Nashville was one of many local projects of the Works Progress Administration (WPA). Oral Voland worked with the WPA crew for several days on the log barn. Other WPA projects locally include the planting of all the dogwoods at the entrance of the Brown County State Park, as well as much of the roadwork in the park. The History of Brown County by Ray Mathis, published in 1936, stated that 500 WPA men worked in the state park, clearing a 200-acre lake site of stumpsand brush. Right off State Route 45 in Helmsburg, a community center was erected. Many of the roads in Brown County were created, widened, or repaired by WPA workmen, including State Route 46.

Chimneys and fireplaces of native stone were added at each end of the building at the time of reconstruction by the WPA, as well as basement foundations with outside entrances. Upon completion of the reassembly in Nashville, the lower east room measured 27’x20’1”; and the lower west room measured 27’x15’9”. The dogtrot measured 27’x24’3”. The height from the foundation to the bottom of the floor joists of the second floor is 9’10”.

An amendment to the deed in 1954 allowed the Community Club to use the building for meetings of various purposes by community groups. Trustees of the Club at that time were Helen M. Allison, Ruth Bessiere, and Leatha Walker. Today, countless individuals stop by and recall attending dances, meetings of the 4-H, Girl Scouts, Boy Scouts, among others in the upstairs room Markings on the floor indicate that shuffle board was one of the activities enjoyed. The Club ceased to exist in 1960, and the log building was deeded to the county commissioners. Records indicate that ownership of the building passed to the Brown County Historical Society in 1974.

The Columbus Republic reported that students of Chris Todd’s Brown County High School building trades class worked to help restore the log building for its new role as a museum depicting pioneer history in the county. Parts of the building were unused for 15 years, and timber had rotted in several places. Todd’s class put in new stairs, as well as doing some rewiring and replacing some logs in the frame, plus some foundation work. Keeping an eye on the integrity of the building, students went to a local farm and cut down trees and hewed the logs themselves for any needed replacement timbers. Students also used antique tools provided by members of the Historical Society. 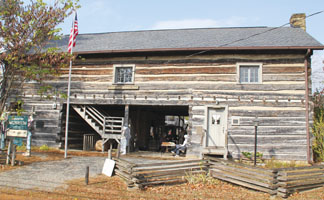 The old barn now houses the much-loved “Loom Room,” where exhibits and demonstrations show the processes from flaxseed and sheep to linen and wool yarns/fabrics. A gift shop is housed in the other side, stocked with the handcrafts of the talented Pioneer Women, and publications of the Historical Society. Visitors will find the iconic 10-inch key to the Log Jail on its walls, with other displays of Brown County artifacts. Exhibits upstairs include an 1877 Spearsville Cobbler Shop; an exhibit of early education in the county that includes a replica of a one-room schoolhouse, photos, and maps; Brown County servicemen from World War II; and Carey Cloud, designer of the original Cracker Jack toys. The old barn is a fitting entrance to the Pioneer Village. A plaque at the entrance states its place on the Register of Historic Places.