Many people have dreams. To some, they are just dreams. Jerry and Sherry Roberson, new owners of J Bob’s in Nashville, are proof that dreams are accomplished through planning, hard work, and faith.

At 55, Jerry Roberson left his corporate job to follow his dream—one that included a tough physical challenge and ambitious plans for early retirement.

Ten years ago, Jerry read an article in a Bloomington paper about a man who hiked the Appalachian Trail. “I announced that I was going to do that someday,” Jerry says. The Appalachian Trail is a continuous marked footpath that goes from Katahdin in Maine to Springer Mountain in Georgia, a distance of about 2160 miles. It covers 14 states and is estimated at five million steps. On April 14, 2008, he began the trek that runs along the scenic ridge of the Appalachian Mountains.

Jerry grew up in the hills of Kentucky and walked most of his childhood. “Any time we wanted to go anywhere, we walked,” he laughs. Though he physically trained for the event, he realizes that mental strength is just as important as the rigorous training.
His daughter Nikki and her friend Steve Rollins hiked the trail with Jerry. Friends and family members waited for news each day. Jerry kept a daily journal and frequently stopped by a post office to send notes back home. “I didn’t have very good cell phone coverage up there,” he says. His wife Sherry sent weekly, sometimes daily emails to keep people updated on the journey.

“Out of the 3,000 to 4,000 people who attempt the hike each year, only ten percent finish,” Jerry says. He lost 40 pounds and sustained a few injuries during the six months on the trail, but he never gave up. Strangers offered their homes and food to the hikers along the trail. The term “trail magic” was coined by hikers to describe the beauty of nature and the small acts of kindness from the people who lived near the trail and in the nearby towns.

“We started in snow and ended in snow,” he says. Jerry finished the trail on October 9, and when he returned home, he knew they needed a plan for their future. “We were not old enough to retire, so now what?” Sherry remembers. They came up with a list of ideas for retirement income: making items to sell, a retreat for artists, and computer work from home.

Over the next several months, the couple sold various items at festivals and opened a store at Traders World in Cincinnati. In July of 2009, they purchased a store in Nashville and renamed the business Main Street Images, now located on Van Buren Street. They also acquired Bedazzled, a small jewelry store located at the Heritage Mall. It was at this time that their son Joe decided to move back to Nashville and be part of their venture.

Sherry took daily strolls up the main thoroughfare of Nashville. On one of her walks she noticed a sign in the window of J Bob’s store that read: “Everything Must Go Sale.” After hearing the story from owner Pat Hughes, Sherry told her, “You can’t close J Bob’s!” After 32 years in business, J Bob’s was going to close.

It didn’t take long for the Robersons to make the decision to buy the store. “J Bob’s is a landmark in Nashville,” Sherry says. Pete Hughes entertained many with his storytelling behind the knife counter. Tourists came from far away to buy their hot sauce and condiments. 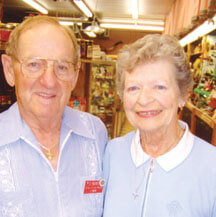 It was a big endeavor for the Robersons, and on June 7, 2010, the store reopened under new ownership. They moved the jewelry store to J Bob’s and made plans to add other products to the store. They recently added a new clothing line called Peace Frogs, designed to help promote positive and optimistic thinking throughout the world. “Customers are excited that the Peace Frog line is back in Nashville,” Sherry says.
Sherry jokes about the number of people that ask if they are interested in buying another store. “I think we have reached our limit,” Jerry laughs. For now, they are busy restocking shelves and thinking about new items to bring to the store.