We Care Gang being there for others

The mixture of homespun outrageous humor and a desire to lend a hand to those in need is at the core of the sixth annual Abe Martin’s Picnic and NASHCAR Outhouse Race. The event mixes quintessential Brown County rural-living elements, some playful spoofing of the stock-car world, some fine barbecue, and civic-mindedness. It will take place Saturday, September 18 on Nashville’s West Main Street, with time trials beginning at 10:00 a.m. A preliminary event for those in the 3 to 9 age bracket, “Younguns, Start Your Big Wheels,” will be held Friday evening at 6:30.

The race is free to contestants. “We furnish the base. They build the outhouse,” says Bob Kirlin of the We Care Gang, the charitable organization that is the recipient of funds raised by the event. The entry form and rules and regulations can be found at the group’s website, <www.wecaregang.org>.

Teams accumulate points toward an overall victory not only by racing their outhouses, but through participation in a plunger toss, a round robin corn hole tournament, a vote-based competition for the best-themed outhouse, and the outhouse that raises the most money. It is the money raised—not strict adherence to vote-counting—that is most important. “We encourage cheating,” says the We Care Gang’s Eric Trommater.

The Gang is also selling raffle tickets, available at the Brown County Convention and Visitors Bureau, for an outhouse, each side of which is painted by a different local artist. Proceeds for the raffle are split between the We Care Gang and the Brown County Art Alliance.

At 11:30 a.m. on Saturday, after the time trials and the Parade of Outhouses, the Gang will host a pig roast picnic under a tent next to the Nashville United Methodist Church at 36 South Jefferson Street. The cost of a plate including a barbecued-pork sandwich, chips and lemonade is $7, with proceeds going to the Gang’s fund. “We make sure you get a big, deli-sized sandwich,” says Trommater. At 3:00, after the corn hole and plunger events, Boomer, the mascot of the Indiana Pacers, officially starts the race. At 5:30, the overall winning team is presented with a trophy and, as Kirlin puts it, “four of the ugliest brown blazers you’ve ever seen.”

The We Care Gang was formed six years ago by a group of area citizens to address the needs of those who, in Kirlin’s characterization, “fall between the cracks,” those who have exhausted options such as churches, township trustees, or the Salvation Army in a time of pressing circumstances. Those types of organizations refer applicants to the Gang, which does not provide financial assistance directly to the applicants. In the case of a utility bill, for instance, the We Care Gang would send a check to the utility company. 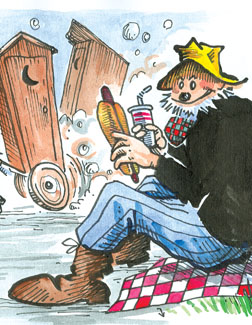 The Gang has given $40,000 in assistance to Brown County residents in five years. Help has taken such forms as putting people up at the Salt Creek Inn during the 2008 flood, payment for heating propane, shoes for a child with foot problems, and gravel for a snowed-in lane. “We want to keep people’s dignity intact, so we work quietly,” says Trommater.

Trommater notes that in a tourism-and-agriculture-based county with no major manufacturing or contracting corporations, fundraising depends on individuals, small businesses, and civic organizations. Some companies outside the county have provided matching donations for supplies and equipment for race weekend’s activities, so that individual’s donations are assured of going directly to the Gang’s fund.

Local merchants are also indispensible to the race and picnic’s success. They provide the chips, baked beans, and cooking supplies. The pigs themselves are donated by individuals, businesses, and community groups. Bear Hardware is contributing the Big Wheels for the Friday evening race. Both Kirlin and Trommater stress that more volunteers are needed.

A small nondenominational church donated the money needed for the Gang’s 501c3 application. A congregation member who is an attorney helped the group with the application process.

Kirlin and Trommater speak fondly of some memorable outhouses from years past. These include a Swiss cheese motif, complete with stuffed mice in the holes, a ship theme—with pit crew members dressed as pirates—a Margaritaville theme featuring a grass hut, and a castle complete with a drawbridge.

The outhouses are non-motorized. “The contest is really about how far you roll,” says Trommater.

It’s also about Brown County-style family fun, and being there for someone in need.

For press kits, credentials, pit passes, or information on becoming a volunteer, contact Bob Kirlin at
(812) 720-0222 or
<lexhsnash@aim.com>.