In a cluster of nineteenth century buildings in the heart of Nashville just northeast of the court house is an old log jailhouse. The last sentence of an order of the Brown County Commissioners in 1837 for construction of a jail stated: “Build her good and solid.”

The first jail was built in 1837 for the cost of $175. It consisted of two fourteen by ten foot rooms, one stacked on the other. Architects were James Taggart and Assistant William Snyder. With the intention of escape-proofing, it was built of two layers of eighteen-inch hewn logs, the outer layer being horizontally laid, while the inner logs were erected vertically. The only entrance was an outside stairway that led to the upstairs. The sentenced men were deposited through a door in the upstairs floor by a rope ladder, which was then pulled up sans prisoner. In 1876, another added layer of logs made the walls 54” thick.

Deteriorating conditions caused a second jail be built to replace the first in 1879, at a cost of $1500. The rooms of this jail were twelve by twenty feet. The thick walls consisted of two walls, one foot apart from each other and horizontally laid, with upright lumber down the center of these two layers. Double doors were of iron. The inner Dutch-type door had a 10 inch key with the top opening for food and wood to be passed through to the prisoner. The outer door had a huge padlock. Both the upstairs and downstairs doors have treacherously low door jams, causing even those of average height to enter with bowed head. The downstairs were quarters for men, and outfitted with a bed, chair, and woodstove. The upstairs quarters for females were outfitted only with a bed, with heat coming from the stovepipe, as evidenced by the charred ceiling boards around the pipe.

The jail’s history relates that only two prisoners escaped, and they did so with outside help. The December 11, 1909 edition of the Indianapolis News noted: “The people of Brown County are an interesting study. The natives use many quaint expressions, they are sociable and generous to a fault and they live a simple and harmless life. They are an honest and upright people, this being evidenced by the fact that their old jail is almost always empty. There are two lawyers in the county and they have a hard time making a living.”

In the early 1900s, a man of the county was arrested for bootlegging and was sentenced to 90 days of incarceration. After just three days, the sheriff gave him a key, making him his own jailer. During the day the prisoner would go over to the sheriff’s house to work and get his firewood and meals. He returned to the jail at nightfall to lock himself in and go to bed. 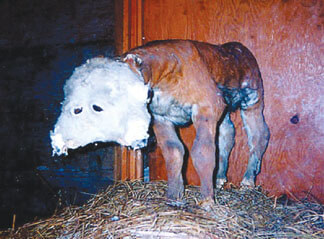 Sam Parks, a colorful sheriff from Nashville’s past, was able to finesse the custodian/ownership of the old jail and convert it into a museum for the exhibition of pioneer artifacts and sensational relics such as whiskey stills. With admission fees of one dime, Parks amassed $1,200 within two years from the increasing numbers of tourists to the area. One iconic photo by Frank Hohenberger has Parks sitting on the iron doorsill of the jail, posing with a vintage firearm from the displays.

Another custodian of the log jail museum was John Montz, and for years local folks recall hearing him repeating almost chantlike the history of the place as he led visitors on interpretive tours throughout the building. Montz was a mystery to the townspeople, remaining mum about his past until his death. An elderly doctor and friend who served as administrator of Montz’s estate discovered that Montz was father to a son, Clarence, who lived in Minnesota. No one ever knew why the family was left behind by Montz.

Another Brown County personality closely identified with the old jail is Jase Skinner, who was born in 1886 in an area known as Kelp. In an interview published in the Brown County Democrat on August 26, 1971, Skinner comments on the displays of the original antiques seen at the jail during his tenure, that included pre-1800 federal money and a loom reported to have been used by Martha Washington.

A yellowing undated publication of the Brown County Democrat called “Brown County Review: Souvenir Pictorial With Maps,” and available for ten cents, states the old log jail is a favorite among the tourists, with “an ancient sewing machine, spinning wheel, and the chains used for prisoners.” Henry Harden is listed as the keeper of the jail for seven years. Also mentioned is the two-headed calf, stuffed and preserved for the curious to view. The calf had been born in Brown County and this was the only museum for her to find residence.

Today the little four-eyed calf remains in a glass case in the upstairs room, across from the empty bed intended for feminine prisoners of Brown County’s past days. Visitors to Nashville graciously plop in their quarters in the box for admission by the honors system. Their offerings are used by the Brown County Historical Society for the upkeep of this treasured log specimen. For Information about the Pioneer Village contact the Historical Society at (812) 988-2899.