by Barney Quick
Vicki Fahnestock, from Indianapolis, celebrates her 50th birthday on the zip line with her two sisters and mother. Sister Patty Leech and mother Pat Gerth watch as she takes off. photos by Cindy Steele

We concentrate on the bond.” That’s how Dan “Hoss” Cartwright, co-owner of Rawhide Ranch, characterizes the essence of the experience of a stay there. “That’s why Fritz and his business fit right in.” He’s speaking of Fritz Harbridge, team captain (yes, that’s his title) of Team Effect, Inc., which runs Holler Hoppin’, the zip line at the ranch.

Cartwright, Harbridge, ranch manager Derek Clifford, and the rest of the staff share several personality traits. There’s a touch of ruggedness that comes from being outdoors much of the time. There’s a genuine delight in meeting people and the art of conversation. Most prominent, though, is a sense of humor that borders on off-the-wall, an underlying acknowledgement of life’s wackiness that humor helps one take in stride.

This attribute is on full display during Holler Hoppin’. From the time a group of guests gets fitted into harnesses and helmets until the participants land after their last hop, the wisecracks and antics are nonstop.

The ranch and Team Effect chose the brand name Holler Hoppin’ for this zip line because, unlike high-wire zip lines situated in treetops, the way stations are on elevated ground between gulleys and valleys. “You start on your feet and you land on your feet,” say Harbridge.

“The demographic that visits this ranch is the same one that visits Brown County generally,” he observes. “They aren’t inclined toward high adventure, but rather taking in the particular charms of the area. So Holler Hoppin’ is more about the interaction than the adrenaline rush.” 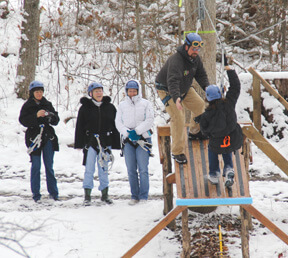 Fritz Harbridge leads Patty Leech to a smooth landing. The Birthday Girl, Mom, and the other sister, Terri Hanlon, wait at the end of another stretch.

The zip line is made of stainless steel airplane-grade cable with a breaking strength of 11,500 pounds. “In our industry, things have to be overbuilt,” says Harbridge. It currently consists of four landing stations and approximately 600 feet of line. The entire course takes about an hour for a group to complete. The ranch plans to double the length next year.

A Holler Hoppin’ session is $30 for the general public and $20 for ranch guests. Riders must be at least seven years old and weigh at least sixty pounds.

In the months since the ranch has been offering Holler Hoppin’, over forty people over seventy years old have participated. Clifford calls them “bucket listers.” “The one-upmanship in that age group is hilarious,” observes Harbridge.

First-timers have constituted the majority of riders so far, but the staff is confident that it will see significant repeat business next year. “People get done and say, ‘I have to get my coworkers down here,’ or ‘I have to tell my family about this,’” Harbridge says.

A lot of people incorporate it into a special occasion. “If we know it’s someone’s birthday ahead of time, we’ll be prepared with silly hats,” says Harbridge. He recalls one couple who came out for a ride immediately after the wedding ceremony.

The offbeat humor is effective for putting riders at ease. “No one gets a straight answer to the question, ‘Has anyone ever fallen doing this?’” says Clifford. “One of our favorite responses to that is, ‘You mean today?’”

“Each facilitator has his or her own style,” says Harbridge. “We each have developed the knack of seeing what kind of group mood we’re encountering. It’s great when they’re already kidding and laughing when they arrive, so there’s not so much loosening up to do. You adjust your schtick to the clientele.” 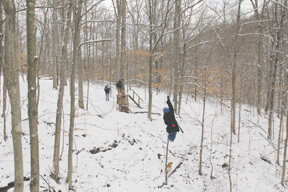 The entire experience of a stay at Rawhide Ranch is, like Holler Hoppin’, designed to bring people together. The Buck Inn, the hotel on the property, is on the second story of a sixteen-stall horse barn. The lower level also houses banquet and meeting facilities. The hotel has two common lounging areas with fireplaces to encourage socializing. The ranch offers campfires at day’s end where guests can unwind after Holler Hoppin’, horseback riding, hiking and fishing. Occasionally, the ranch offers murder mysteries, in which guests are assigned characters to play and given a loosely scripted scenario.

“In this industry, there’s a trend away from the use of the word ‘dude,’ which has connotations of a skittish city slicker,” says Clifford. “Like a lot of places, we call this a guest ranch.”

“One recent weekend, we hosted two ladies with kids and two couples without kids,” Clifford recalls. “We wondered if their differing expectations would cause tension, but by their last night, they were all playing charades together.”

Harbridge and his Team Effect crewmates have an array of relationship-building services they offer separately from their association with the ranch, but they are very much part of the fabric of ranch life. “Given what Rawhide Ranch is about and what Team Effect is about, it makes for a great cross-promotional effort,” says Harbridge.

Harbridge says that no one ever fails to overcome any nervousness by the time he or she lands after one hop. “I’ve never had anyone complete the course and say, ‘I’ll never do that again.’”