“I don’t like flat land,” says Larry Webb of how he ended up in Brown County.
As a boy, making art came easily to Webb, so when he was offered a full scholarship at the Herron School of Art and Design he took them up on it. He didn’t quite make it to graduation, though. “Everybody else was trying to find themselves,” he says of those times. “I was looking for someone to tell me where to go.”

He taught vocational art at Camp Atterbury. “We had students who couldn’t even read,” he remembers, “training to be functional in a trade, get their GED, or both.” That was when Larry first picked up an airbrush, teaching himself by studying illustration of machinery by Alberto Vargas, known for his lush Rubenesque airbrush painting in Esquire and Playboy magazines.

Noticing the trend for scenic painting on vans, Webb tried his luck on his own vehicle. Popular designs at that time were of water falls and covered bridges, moose standing in water, cat tales, dinosaurs, NASCAR racing, and sailing ships. One day, while passing through Connersville—a growing center for the new industry—Larry saw a dealership with painted vans for sale. The rest, as they say, is history. 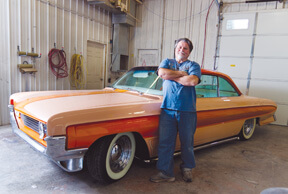 “The guy asked me about my van and I said I’d done it myself. ‘Do you want to do that for a living?’ he asked. ‘I can give you more work than you can do.’ I made lots of money.

“Two years later the Herron School asked if I wanted to teach. They were getting calls from car dealerships needing air brush artists—the school I didn’t finish wanted me to come back and teach. I thought that was pretty weird!

“I ended up in automotive paint because I’ve always loved cars.” he continues. “Most automotive body guys cannot draw a straight line, and most artists know nothing about the air brush—they know oil or water painting. John Herron made me a decent offer but it was nowhere near what I was making painting.”

Larry illustrated over 6,000 vans in the twelve years the style was popular. “What happened was that paint shops were gouging the insurance companies. They would charge three or four times more than they got for the original job. I said to them, ‘This is not good, you’re cutting your own throats.’” Eventually the insurance companies stopped covering airbrushed vans altogether.

Larry considered moving to England, or California, where there was still work, but “I wanted to raise a family in the Midwest so I did automotive repair and collision work.” Today Webb’s Restoration in Gnaw Bone is run by Larry’s sons, leaving him time to paint. “My boys all went to college and I didn’t think they had any interest, but they said they wanted the business. They put up this building for me and called it The Pasture,” he laughs. “I’m real lucky. I couldn’t have planned it better.”

Larry paints custom cars and motorcycles, as well as restoring collectable cars. “People get extremely artsy on them now,” he says, thanks to television programs featuring Jesse James, the Teutul family, and Billy Lane. Patriotic themes are popular, along with the grim reaper, native-Americans, traditional flame jobs, and “bomber art—like the pin-up girl on the nose of a WWII plane.

“I still have passion for cars and art,” he continues. “Even though it died out I had a feeling it would come back. That’s America for you! They like flash and bling-bling.”
Webb uses his skill to help customers realize their vision for the vehicle. “People come to me with ideas,” he says, opening his scrapbook. “Here’s a motorcycle I did after the twin towers burned—very patriotic. It’s still on the show circuit because it does so well. From a distance the bike looks like an American flag. The fender starts out as crumbled concrete, showing the destruction. The back of the bike is Bin Laden and his vision of what he was doing. The very back shows his head roasting over the Statue of Liberty’s torch. Even the kick starter is an eagle’s talon—these are ideas its owner threw at me.”

Webb also enjoys painting murals, as at New Life Community Church in Nashville, where the walls of the children’s rooms display prosaic forest and jungle themes. “I’m fascinated with the airbrush, always have been,” he says. “I can do a mural in a couple hours. I just take off.”

He’s glad he stayed. “There seems to be no status or prejudice in this county. At a school board meeting you’ll have a man on welfare and the man who owns the building sit and talk and communicate and get things done together. Everybody is supportive of each other,” he adds, remembering the fire that destroyed his home in 1984. “I couldn’t believe how people offered us food, clothing, money, and places to live.

“There may be a lot of communities like this but I don’t want to go looking for them,” he adds laughing.