Jan and Richard Halladay were concerned that after both retired, they would loose their mental sharpness due to lack of stimulation. Neither one played a musical instrument so taking one up seemed like a perfect and fun solution. Their instructor, Kara Barnard, an internationally competing musician and teacher of many instruments, suggested forming a dulcimer group.

On November 13, 2003 several folks gathered at the Halladay home and thus was born the Brown County Dulcimer Society. There are now approximately 12 to 23 musicians who meet the second and fourth Thursdays of each month (except during Christmas holiday season.) They come not only from around Brown County but surrounding counties as well. Not all play the traditional dulcimer. In fact, this group is known for the many different instruments they play including mandolin, upright bass, octave mandolin, auto harp, bowed dulcimer, harmonica, violin, guitar, spoons, and surprises. The type of music they play is also varied. They enjoy folk, gospel, fiddle-tunes, holiday favorites, and even a Beach Boy tune now and then.

The main goal of this multi-generational group is to have fun while learning, practicing, and playing good music. There’s a lot of laughter, some instruction, singing, and even a little dancing while practicing their art and passion. All this takes place in the spacious, yet cozy home of the Halladays which is tucked peacefully in the hills of Brown County.

The dulcimer has its origins in the Appalachians. According to the Appalachian Cultural Museum’s website, the word ‘dulcimer’ comes from the Latin word dulcis meaning sweet and the Greek word melos meaning sound: dulcimer = sweet sound.
Although no one knows the origin of the instrument, it’s believed its evolution began with the Pennsylvania Germans who migrated into southwestern Virginia and West Virginia in the early 1700s. Rural mountain craftsmen used whatever tools they had, including old cigar and shoe boxes. It was designed to be played while resting on the lap. “This was because the women wanted to join in the music making, but it was considered inappropriate for them to stand. They had to play an instrument sitting down,” commented one of the Society members. 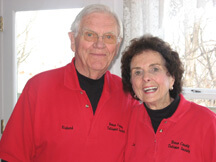 The dulcimer almost faded into obscurity until the resurgence of folk music in the 50s and 60s. It was folk legend Pete Seeger’s father, Charles Seeger, who wrote an article about the instrument in 1958 which turned out to be a turning point in the dulcimer’s history. Now, dulcimer groups are popping up all over the country.

Several members of the Brown County Dulcimer Society own dulcimers made by local craftsman Bill Berg, who has been creating these works of art for over thirty years.
Rich Greeno, who works at The Weed Patch Music Company in downtown Nashville (owned by Kara Barnard and Jess Russell) is a Society member and says he can teach anyone to play the dulcimer in five minutes, “If they pay attention!” was his caveat. “It’s true!” says Jan. Neither she nor her husband read musical notes, and yet now they are members of three groups. He plays the upright bass and she enjoys the octave mandolin.

“Each one of our members has an interesting history, story, and life. When they all come together to play, all their lights shine in a beautiful harmony to play one song,” observed Jan.

Upon watching The Brown County Dulcimer Society enjoying their time together to make music it easy to understand what Jan was saying. Whether it’s for their own enjoyment at one of their jam sessions, or a performance for various organizations in the area, their love of music is what motivates each one.

At the heart of it all is the simple mountain dulcimer, a very personal instrument with its sweet sound that keeps the peace and beauty of mountain living as fresh today as it was hundreds of years ago.

For more information on The Brown County Dulcimer Society, contact Jan or Richard Halladay at (812) 988-6566. A huge selection of dulcimers can be found at Weed Patch Music Company at 58 E. Main Street next to the courthouse in Nashville.