Cox Creek Mill in Brown County is the result of years of hard work by area craftsmen. The two-story mill is sided with board and batten poplar. On close inspection, the stone squares of the chimney show the marks and craft of hand-chiseling. The interior is a wood lover’s dream: ten inch poplar beams, walnut flooring, and cherry ceilings. Cherry and walnut are repeated in the stunning doors, along with white oak. Brad Cox, owner and builder of this beautiful mill, says that 90% of the wood used in its construction was from the property. It was also milled locally in Gatesville by Morgan’s Saw Mill. Cox himself, along with the help of Larry Whitaker, fabricated the ”overshot” wheel. The wheel is 14 feet in diameter, with sixty-four buckets, and required a crane with a hundred foot boom to set the wheel in place.

Fabricating the wheel was a project that brought the two men full circle. It was Larry who got Brad into welding years before. Brad became a certified welder and spent thirteen and a half years as general foreman for a company who welded on high pressure gasoline tanks nationwide. He traveled from Fort Lauderdale to Omaha; from Nebraska almost all the way to Canada at Bay City, Michigan.

Twelve years ago, Brad’s welding turned to the art form of ornamental iron and at about that same time his heart turned to making a home in Brown County to raise his family. He had been coming to Brown County since childhood, visiting his aunt, Ann Melton, who loved to paint subjects from nature. In the midst of his welding career he would travel to Brown County to rest and refresh, sighing with relief as he drove into the county from Route 46. Living in Brown County permanently was a dream for a long time. Brad finally made the move eleven years ago. He has built four cabins in Brown County for family members, the first in 1999. Welding became creative while Brad’s Brown County studio, Iron Gate, put out artwork fabricated from bolts, studs, and nuts found littering industrial refineries all over the country. Whimsical pieces include turtles made from iron skillets, and daisies with petals of horseshoes. Larger exterior pieces have included a dragonfly of metal and iron parts with seven foot wings. Interior pieces include custom spiral staircases and wall hangings. He takes part in about twelve juried art shows a year including shows in Berea, Kentucky, Madison, Indiana, and the recent Talbot Street Show in Indianapolis. Brad’s wife, Stephanie, does all the accent painting on Brad’s finished pieces, and their sons attend the shows when school schedules allow. 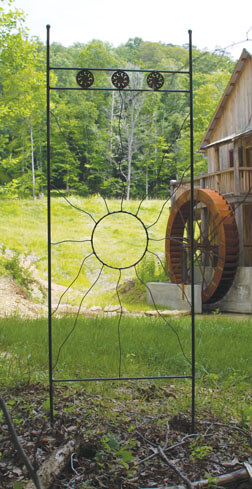 Brad’s metal artwork can also be seen at Big Woods Brewing Company, including a ”kicker” at the bar. You can check out more of his work at the new Big Woods Pizza on Van Buren Street in Nashville. The most elaborate piece Brad has made is a railing in a cabin that is extended for three stories with a marsh scene incorporating lily pads, cattails, dragonflies, and reeds. When new metal is needed, Brad purchases it from Kroot All American Steel, a 125-year-old family-owned business in Columbus, Indiana.

Compared to most of us, Brad has bottomless energy to work, help friends, create beautiful and lasting metalwork at his ornamental iron studio, and pursue his dream with the Cox Creek Mill. The Cox Creek Mill will be open to the public, a point of interest for Brown County neighbors and visitors. Along the walls of the bottom floor, old pictures of Brown County mills will capture how important mills were to early communities. Brad is happy that one of the early grist mills in Brown County was operated by another Cox, Benjamin Cox. It was located where Greasy Creek meets Salt Creek. Brad envisions using Cox Creek Mill as a means to educate about renewable energy and the conservation of water resources. The mill is also an artisan studio where he works in ornamental iron. He has a forge in a reclaimed barn. He smiles and says that he will be ”making power, not flour.”

Brad’s property will be home for sons Bryce, now 14 and a freshman at Brown County High School, and Briar, 7 years old and a rising second grader at Nashville Elementary. Oldest son, Tyler, 20, currently travels and inspects tanks that Brad welded during his earlier career.