“The meaning of life is to see,” said artist Frederick Franck, who encouraged his students to establish a mystical connection with their subjects. This, it seems, is the principle that underlies the work of Timothy Carter-East, an innovative Brown County artist who creates pieces he calls, “Botanical Artistry.”

While he does press flowers, grasses, and leaves, and incorporates them into his pieces, his sophisticated collages are unlike any other approach to art with plants that he has been able to find in his computerized research. One unique aspect is the incorporation of plant pigments, obtained by careful pounding of the leaf or petal or stem. Pansies are a frequent contributor.

“Shifting quality of light, diversity of textures, and negative spaces, are the primary elements of my work,” Carter-East states. “My art usually builds from the awareness of space, then gradually becomes…as paper, ink, and botanicals make their contributions.” 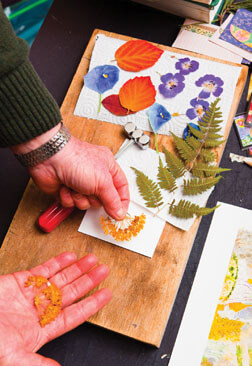 Because the natural plant colors fade fairly quickly, each piece is soon photographed. Originals are archived and occasionally sold, but the photographs are turned into affordable images of varying sizes. The most popular are his greeting cards, which are typically 5” x 7” giclée prints on watercolor paper.

Much of his work is saturated with strong color, a gift from his “muse” and wife Rebecca Carter-East, owner of Rebecca and Me in Bloomington, where Carter-East’s work is sold and where the artist can often be found on Saturdays. “When I met Rebecca, everything was earthy—a variety of browns and greens. A little way into our relationship she said, ‘Why don’t you add some color?’ So I did,” he laughs.

Inspiration lurks everywhere, and he is constantly alert to his environment and its subtleties. He is capable of incorporating the most delicate of flowers that bloom for only one week in early May or the cartoon pink-mouse-images on a Chinese calendar from The Year of the Rat.

Carter-East was deeply influenced by Bill Moyer’s conversations with Joseph Campbell in the PBS series “The Power of Myth.” Campbell suggested that religion is software to reconnect us with our source. “That really got me going,” Carter-East states. “To get to where the observer becomes the observed is a very special moment,” adding that it has come to him in many ways, more and more often as a runner and a hiker of Brown County trails. “My sanctuary is the woods.”

Carter-East reads widely and keeps journals of favorite phrases that can be added to his cards. The greeting card quotations “match up” with the designs after completion. He is currently building a Quotations section for his website that will allow buyers to match their choice of quotations to their choice of cards.

Among the quotes now in use:
“Meet me on the equinox”
—Death Cab for Cutie
“Go forth and set the world on fire”
—St. Ignatius
“Evermore thanks” —Shakespeare
“The sun shines not on us,
but in us” —John Muir
“In each moment, I am filled with
gratitude” —Thich Nhat Hanh
And his personal favorite is from Hugh MacLeod, “Everybody is given a box of crayons in kindergarten,” which appears on the outside of the card, while inside it says, “I’d like to have my crayons back, please.”

As long as he can remember, Carter-East has loved art, the natural world, and paper. As a child, after school, “I’d go into the garage to spatter coffee and turpentine on brown paper, because it needed to be done.”

His love of reusing and repurposing led to winning honors in the sixth annual Columbus, Indiana “Déjà Vu” show of objects recycled into art. His entry was purchased and now hangs in the Columbus Recycling Center.

He credits his early art classes at Anderson High School with his understanding of space and the discipline. New York artist Mark Brown wound up teaching in Anderson, staying with the same class from their ninth to twelfth grade years. “I have embedded in me artistic techniques that I learned at that time.”

After college at Anderson University, where he had an art minor, he entered the financial world and has had “a day job” ever since. His art changed form to allow for family and work responsibilities, but art remained central. “I will create. I’m almost channeling. I do my job eight hours a day, but I think about art 24 hours a day. Artists need to know it’s okay to have a job.”

He participated in 26 art fairs last summer, working in his booth to the delight of show sponsors, children and buyers. Works went to New York, Chicago, Rocky Top, China, Japan, Ireland, as well as Nashville, Columbus, Indianapolis, and Bloomington.
“Art is a way for me to meet myself…one step at a time. My focus is to take a creative step each day. My goal is to be larger today than yesterday…to become is really quite a sensation.”

Carter-East’s work can be seen on his website <www. timothycartereast.com>.