Students from Indianapolis bicycled down to the Needmore community building for a class in “Visiting Planet Earth” taught by Bill Land in the early 1980s.

Needmore
Freedom of the Day

A car carefully negotiates a narrow winding lane in western Brown County one dark and foggy night in 1975. It’s full of teenagers who, on a dare, have invaded the heart of this hippie stronghold along Plum Creek. The fog is thick and eerie, ghosts roam in the mist, and trees malevolently reach out for them. Suddenly, a massive dark creature looms out of the murk, blocking their escape. As they sit breathlessly in their immobile vehicle the creature languidly approaches, snorts wetly against the windshield, laying its massive head onto the hood of their car with a deep sigh.

“A lot of people needed diapers after that experience,” Bill Land chuckles, remembering the gentle old buffalo that often escaped her pasture.

The legend of the Needmore community still haunts this part of Brown County, much as the ghost of Dove Bill watches over nearby Pine Bluff. “I was there in 1970,” Land remembers from his home on Bloomington’s westside. “I lived there from 1975 through ’85 and was part of the leadership council. I went back to live about seven years ago and it still has some of the same qualities.”

Originally, the Needmore community ranged over 2000 acres stretching along Plum Creek Road to Lanam Ridge and then back to SR 45. The property was owned by Kathy and Larry Canada, who lived on Lanam Ridge. Their original intention was to sponsor a commune there but after several years their dream faded. They sold half of the property, giving the rest to the residents—about 18 houses and 75 people. “We’re talking now about the middle-’70s,” Bill remembers. “By then it was a community, not a commune.”

Land and his wife, Joan, were attracted to Needmore after reading articles Kathy had written about homesteading, self reliance, and organic food. “I was teaching at Butler University. We sold our home and moved to do what Kathy was talking about. We had bees, ducks and chickens, dairy goats and horses. We had gardens, plowed with horses, and planted fruit trees. We were attracted by self reliance and self sufficiency. 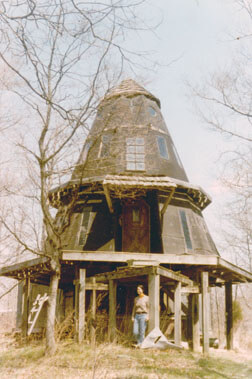 “There were privies and no water—we had drive a half mile every day to get 75 gallons to water our animals,” he remembers. “We didn’t have power for the first year and a half. We were living off the grid and experimenting with simple living. We heated with wood, made our own cheese and bread, and educated our children.

“The atmosphere was wonderful because it matched up with the movements of the day, the youth of the day. We sat around the campfire at Indian Mound—a small plateau overlooking the creek—and played music.”

Legends of Needmore describe the hippies, the drugs, and the anarchic sense of freedom, but Land disputes these notions. “There was a big difference between those who homesteaded and those who came out from Bloomington to party,” he relates. “There were married couples and children—it was a community. We had a good relationship with the sheriff; it wasn’t as wild as people made it out to be.

“We did have a good time,” he admits, chuckling. “And there were a lot of good parties.”

For a long time the land was owned collectively but that changed. “We had a vote when we decided to sell some of the properties on contract,” he says. “There were strings attached to the land’s resale but it was still a big change in the community—from free-form to something more organized. Some consider it the way it was ruined. They forget that it was the only way to raise capital. It gave us the money to finish the community building and for land conservation.”

Bill and his wife bought 20 acres creating their own sub-community called Chrysalis. It was their effort to try communal living, like Twin Oaks in Virginia, Sand Hill and East Wind in Missouri, and Dandelion in Canada.

From 1975 to 1985 they raised state champion dairy goats while Bill taught at IU-PUI Columbus and Butler. Joan was general manager of Bloomingfoods. “We had a foot in both worlds,” he says. “It was one of the more enjoyable times in my whole life, going horseback riding and helping people build their homes.”

Bill used the Needmore community as a classroom. “The class was called ‘Visiting Planet Earth’ and students came from Indianapolis. They would spend the weekend and camp out in our community building. They’d learn how to use a chainsaw, about rabbits and organic farming, how to milk goats and build log homes—it was the first time those city kids had used a privy!”

Every week the community would gather in the large hexagonal community building. “Everybody got a chance to speak, to be listened to—and everybody was outrageous. The power was very horizontal. There was no leader. The council, which was six to eight people, made sure the taxes were paid.”

Today he’s teaching classes at the Tibetan Mongolian Buddhist Cultural Center in Bloomington on Fung Shui, Tao, I Ching and the Yin of simplicity; Yang of abundance.

“You had to be young,” he smiles wistfully. “I’d do it again in a heartbeat.”