Skip to content
The Opera Comes to Brown County

The Opera Comes to Brown County

Until four years ago opera being performed in Brown County wasn’t on anybody’s mind. That changed when Jan Spears, owner of the Nashville Dance Studio (and considered the ‘face of dance’ in Brown County), along with Howard Hughes, a local supporter of the arts, shared the vision and “flipped the switch” to make it a reality.
Howard recalls being at performances of both the Indianapolis Opera (IO) and Dance Kaleidoscope feeling disappointed that no one from Brown County ever attended. So he decided to find a way to bring the performance arts to Brown County instead. What happened next was nothing short of a logistical miracle.

As part of their commitment to education, the IO already had opera scores re-written for children and ready to rent to school systems. Hughes stepped up and underwrote the cost in order for the Brown County school system to have this opportunity, including all the bus transportation necessary to get students to and from rehearsals and performances. Jan Spears oversaw the production process with the high school students for the first three years. 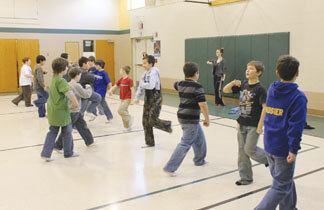 IU student Laura Hunter begins working on the Daughters of the Regiment dances with the fourth grade Van Buren Elementary boys on a Friday in February.

Part of what the IO included in their offering was four singers and a pianist who participated in the rehearsals and performances. Every aspect of putting on a performance was taught to the children by both IO and Dance Kaleidoscope including props, lighting, sound, and costumes. For the first three years, this was a unique collaborative effort in which one high school student was assigned a job and paired up with an elementary student. IO also designed lesson plans in geography, science, math, English, and social studies for teachers to use relating to the upcoming opera.
Since Dance Kaleidoscope’s mission (where Hughes is on the Board of Trustees), is to “Inspire, educate, and entertain through the experience of outstanding contemporary dance,” they worked along side the IO and created their own mentorship. According to Lynn Webster, Education Director, one of their choreographers held a master class with the high school students. These students then created their own choreography and in turn taught that to the fourth graders of the selected elementary school. This year, because of the high school’s schedule change, two modern dance majors from IU, Laura Hunter and Melody Cutsinger, will be working with the fourth graders—one for the girls and one for boys. 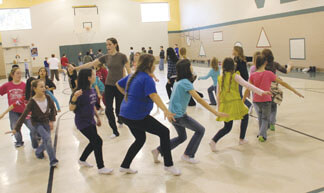 In the second grade classrooms, Dance Kaleidoscope brought in their marketing and production managers to teach the value of good marketing in a simple way the students understood. Each was then given their own poster board and taught how to create an ad that prompted people to come see the performance the older students would be putting on. They were encouraged to take their unique posters out into the community for display. Press releases were explained to fifth and sixth graders by writer/bookmaker (and artist) Michele Pollock. She helped the students create and publish the opera’s publicity.

Of course, none of this could have happened without the support of the Brown County School Superintendent David Shaffer who, according to everyone involved, has been superb. The logistics, time, and effort offered have been a result of his full blown support of this project. “You could not ask for a better environment,” said Hughes about the entire school’s participation and enthusiasm from the top down.

But this commitment went beyond the school system. Out in the community, the local library devoted time to have the actual story of the opera read to children of all ages so that they understood what they would be seeing. This too was the result of Howard Hughes’s efforts, according to Lynn Webster.

Finally, “An Introduction to Opera” class was offered to the public which explained what the production was about.

To date, the students of Brown County have performed Carmen with Helmsburg students, Pirates of Penzance with Nashville, and The Mikado with Sprunica elementary children.

This year the whole process begins again. Van Buren Elementary will present Daughters of the Regiment, a lighthearted love story that takes place in the Austrian mountains in 1815. Performances will be on April 15 at 1 pm and 7 pm at the high school auditorium.

None of this could have been possible without the vision and generosity of Howard Hughes and the tireless effort of Jan Spears which got this program off and running. The project also received support from the Brown County Community Foundation, PSI IOTA XI, Indiana Arts Commission, and the Bloomington Area Arts Council. 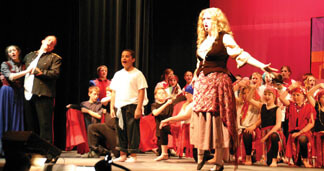 “I’ve never seen anything as inclusive of everyone as this is. Brown County is the star of this huge program,” adds Lynn. It really does take a village to perform an opera in Brown County.

From Howard’s perspective, the end result has been an increase in the number of Brown County residents attending an Indianapolis Opera or Dance Kaleidoscope performance. “It is my great pleasure to be involved,” he says with a smile. Because of the efforts of so many, residents in Brown County now have the opportunity to be involved in the performing arts in a way they never have before. Bravo!