“Howdy, howdy folks.” That’s the way that Bill Monroe always greeted the audience at Bean Blossom. It has been 15 years now since Bill has left us but the spirit of the Father of Bluegrass and founder of the oldest, continuously running, Bluegrass music festival is still much in evidence at Bean Blossom—in the music, the hospitality, and the neighborly atmosphere of the Bill Monroe Memorial Music Park. Thanks for the wonderful present and Happy 100th Birthday, Bill.

The Bill Monroe Bean Blossom Bluegrass Festival got off to its start in 1967 in the old barn that used to grace the area directly behind the current Hall of Fame. The next year, with considerable effort from the Bluegrass Boys themselves, land was cleared and a stage erected in a natural amphitheater and 1968 saw the first outdoor festival at the park.

Today the park is 55 acres of performance space, modern camping facilities, and vendor areas. It is also home to the Bluegrass Hall of Fame where the achievements of many of the musicians who helped shape and advance the music are enshrined. Just outside and to the south of the Hall of fame is the cabin where Bill Monroe, as a youth, “batched” with his Uncle Pen. Uncle Pendleton Vandivier was Bill’s mother’s brother who is memorialized in the classic song “Uncle Pen” and the fall “Uncle Pen Days Festival.” But it is Bluegrass music that draws crowds to Bean Blossom.

Bluegrass music is as traditional as Ralph Stanley and as up to the minute as the Grascals, both of whom will be at the festival this year along with over fifty other top Bluegrass bands. The 45th annual festival includes big name acts such as, J.D. Crowe and the New South, David Davis and the Warrior River Boys, Special Consensus, the James King Band, The Wildwood Valley Boys, The Tony Rice Unit, and Jesse McReynolds and the Virginia Boys. 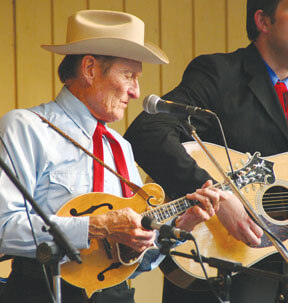 One of the highlights of this year’s festival will be a tribute to the Grateful Dead. I know that’s got you scratchin’ your head but bear with me and I will explain the connection. First off, Jesse McReynolds, of Jim and Jesse fame, recently released and album entitled “Songs of Jerry Garcia.” Jerry of course headed up the psychedelic Grateful Dead but he also played in the Bluegrass band “Old and in the Way” with Peter Rowan, Vassar Clements, John Khan, and David Grisman. Garcia, a very good banjo player, also came to Nashville in the early 1960s to hear Bill Monroe and the Bluegrass Boys and to copy tapes of old Brown County Jamboree shows that he had heard about. Jerry was very devoted to Bluegrass and many of the songs he wrote lend themselves, handily, to Bluegrass treatment.

One of the highlights of the week is the Youth Bluegrass Boot Camp. This is a series of small group workshops taught by professional instructors to help the next generation of Bluegrassers get a head start. The Boot Camp covers topics such as basic instrument care and handling, vocals and harmony singing, stage presence, song writing and more. All of it aimed at youngsters six to eighteen years old. The only catch is that the boot camp is so popular that it is limited to the first 50 applicants and you have to register before June 1 to get a spot. If you don’t make it this year, you can register early for next year. 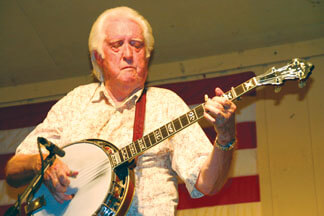 There are also workshops for adults to hone their skills on banjo, guitar, mandolin, bass, and fiddle. And performers, when they are off stage, are generally available at the shelter house or just hanging out with the crowd, to answer questions or just friendly conversations. It’s like moving into the best neighborhood in the world for a week.

And speaking of the neighborhood, it doesn’t matter what degree of comfort you require, Bean Blossom can accommodate you. You can have your choice of luxurious RV camping with over 300 sites with electric and water hook-ups to one of 13 log cabins scattered about the grounds or just bring a tent and pitch it on one of the 400+ primitive sites. Any way you want to go there are laundry facilities and hot showers to keep you fresh.

With these great accommodations, friendly folks, big name performers, a family friendly attitude, and fascinating side attractions, Bean Blossom is the perfect get-away. Whether you stay for a day or a week a trip to the Bill Monroe Bean Blossom Bluegrass Festival is a unique and unforgettable experience.

Tickets for the festival run from $15 to $30 dollars for a day or you can get a Thursday through Saturday combo pass for $75 or stay a whole week for just $150. Youngsters 13 to 16 years old get $5 per day off the ticket price and children under 12 get in free with an adult. RV sites are available for $21.50 with 30 amp electric hookup or $31.50 for 50 amp service. Primitive tent sites run $6.36 per person. And whatever you discover that you forgot to bring can be got up at the camp store adjacent to the Hall of Fame.

I hope to see you there so I can say, “Howdy, howdy folks, welcome to Bean Blossom.”