The Bill Monroe Memorial Music Park is having a John Hartford Memorial Festival from June 2 to June 4, 2011. I’m glad somebody thought to do it, and thought to do it at Bean Blossom, because it’s a fitting place to celebrate his life and music. Back 40 years ago, the 1971 Bean Blossom Bluegrass Festival was the best one they ever had. I know because John and his band (Tut Taylor on Dobro, Randy Scruggs on bass, Norman Blake on guitar and mandolin, and Vassar Clements on fiddle) were there and I wasn’t.

For those who may not know or remember, John Hartford was a Grammy award-winning, multi-instrumentalist, idiosyncratic, old-timey, Bluegrass, songwriting, steamboat pilot. Some of the most recent things he did was provide music for the movie O, Brother, Where Art Thou and performed in the “Down from the Mountain” concert tour. He also narrated and provided music for Ken Burns’ Civil War documentary.

John started out playing banjo and fiddle in Bluegrass groups in Missouri when he was still in high school. After attending Washington University in Saint Louis he moved to Nashville, Tennessee to break into the music business. He DJ-ed, played session jobs, and wrote songs in his spare time. After achieving some success with an album called “Earthwords and Music,” which featured his song “Gentle on My Mind,” John moved to Los Angeles. 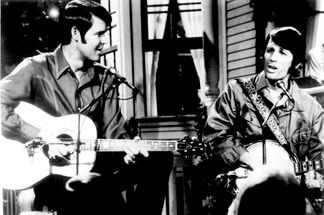 He was on television in the late 1960s with the Smothers Brother’s Comedy Hour and the Glen Campbell Goodtime Hour. Campbell had a certified hit with “Gentle on My Mind” and a gazillion other folks recorded versions of it. While still on the west coast Hartford played on the Byrd’s album “Sweetheart of the Rodeo” and was even offered his own television show. But, with the royalties from “Gentle on My Mind” coming in, John felt free to leave Hollywood.

He left to get his steamboat pilot’s license and chart his own course on the Mississippi, Illinois, Ohio, and Cumberland rivers. Just as it was important for John to get out of Hollywood, it was important for him to explore his own forms of music. In 1971 he recorded an album with the band he brought to Bean Blossom, entitled “Aereo-Plain.” Sam Bush said, “Without ‘Aereo Plain’ there would be no ‘Newgrass’ music.” It was the catalyst for a lot of young acoustic musicians to explore and stretch the boundaries of traditional music and breathe new life into Bluegrass.

Hartford continued his experiments with in music with people like Doug and Rodney Dillard, Sam Bush, Marty Stuart, and Jerry Douglas. Around the 1980s John developed a solo act in which he sang, switched off on banjo and fiddle, and kept time by clogging and shuffling his feet on a piece of amplified plywood. Sometimes, he would just walk off stage while he was fiddling and stroll through the audience. It was a fine performance, I was lucky enough to have seen him two or three times in different venues.

In the 1990s, Hartford changed things up again, touring with his son Jamie and putting together the “Hartford String Band” with Bob Carlin, Mike Compton, Larry Perkins, Chris Sharp, and Mark Schatz. With this band he recorded an album entitled “Good Old Boys” which features a moving ten and a half minute ode to Bill Monroe called “The Cross-eyed Child.” It was also about this time that he recorded his album “Retrograss” with Mike Seeger and David Grisman. In all, John recorded more than 30 albums, wrote hundreds of songs, and left a legacy of smiles wherever he performed.

John Hartford was diagnosed with non-Hodgkins Lymphoma in the late 1980s but he continued to work on his songwriting and performances. Even as his condition worsened he recorded several albums of fiddle music, contributed to the score and even has a brief cameo in “O Brother”. His narration and fiddle playing at that time adds a distinctive flavor to Ken Burns’ “Civil War”. John passed away ten years ago on June 4, 2001, he was 63 years old.

So, 40 years after John Hartford first performed at Bean Blossom, it is fitting to honor his achievements in music and life with a festival. The lineup for the festival is truly remarkable. Tim O’Brien from the legendary Colorado Bluegrass Band “Hot Rize” will be on hand, as well as Tut Taylor and the Dobrolic Plectral Society. Danny Barnes of the Bad Livers, the Freight Hoppers, Leroy Troy, the Henhouse Prowlers, and Rodney Dillard and the Dillard Band (some of you might remember them as the “Darlings” from the Andy Griffith Show) will also be performing along with about 16 other bands including our own White Lightning Boys. It will be a three day celebration of Bluegrass, Newgrass, Retrograss, and plain old American Folk music.

The tickets for all 3 days are only $75 (not including camping) and that includes a special Wednesday, June 1, concert and party. If you can’t make for the whole shebang, the tickets are $20 for Thursday, June 2nd, $25 for Friday, June 3rd, and $30 on Saturday, June 4th. And remember, this all takes place at the Bill Monroe Memorial Music Park so there’s plenty of good camping, flush toilets, hot showers, and great music.

Tickets can be purchased on the festival website < www.johnhartfordmemfest.com> or by calling (314) 315-3670. For information about the Bill Monroe Memorial music Park and camp site availability go to <www.beanblossom.us> or call the park office at 1-800-414-4677.